Wolf Haven, a magical place for plants and wildlife, Post by Theodore B. Thomas, Photos Courtesy of Wofhaven

Theodore B. Thomas is Vice President of the Wolf Haven Board

Wolf Haven was founded by Steve and Linda Kuntz in 1982 to provide a safe haven for captive displaced wolves in need of a home. 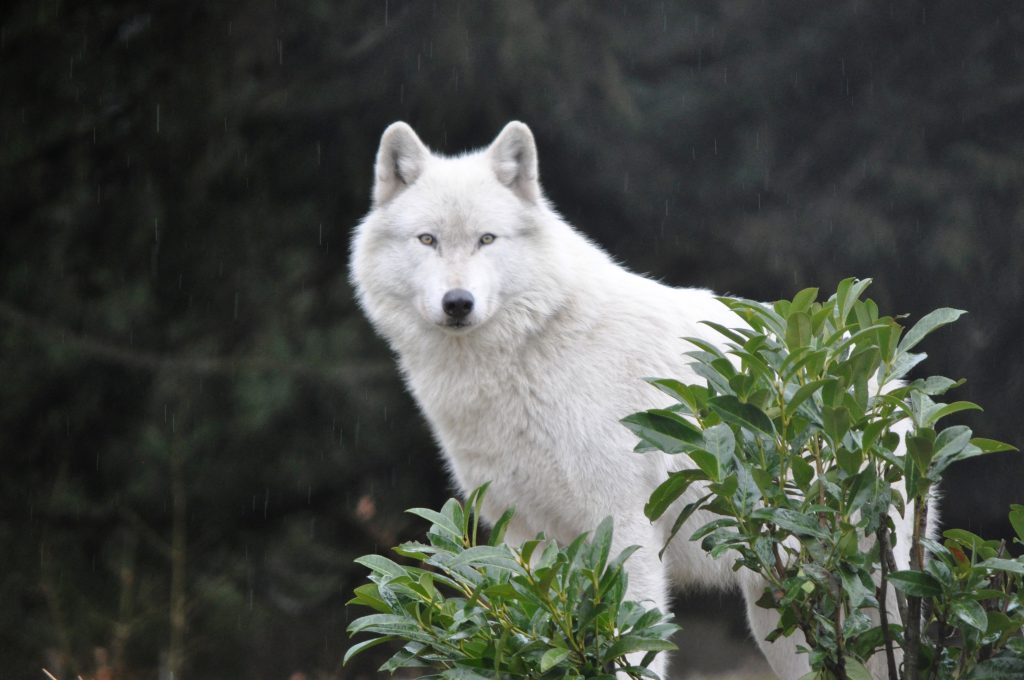 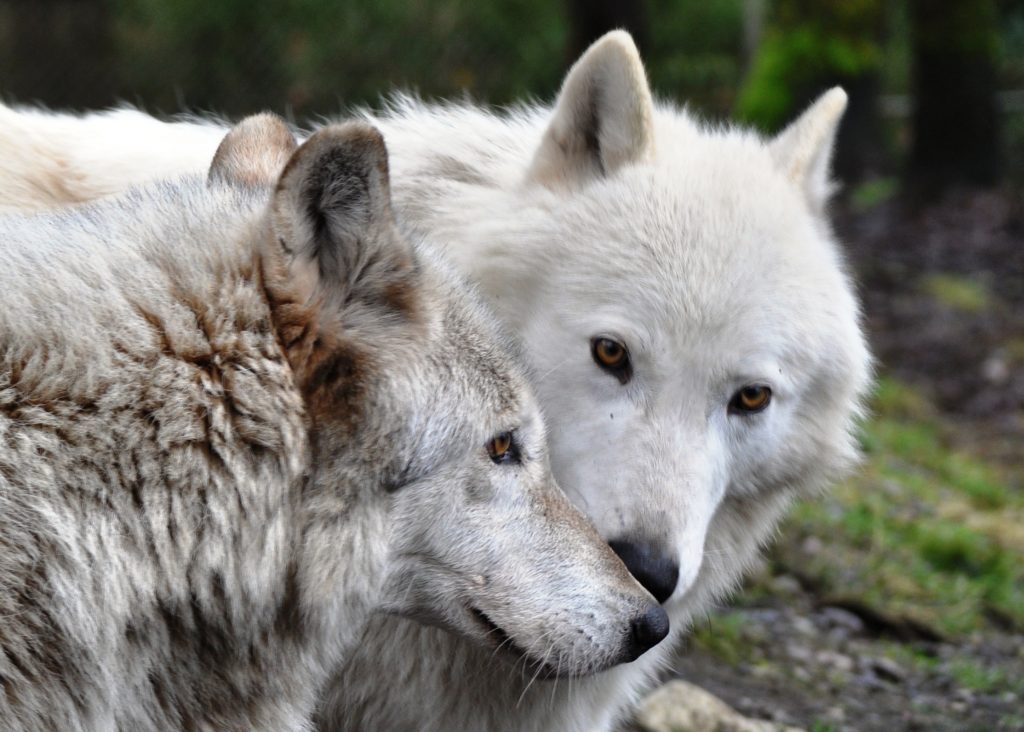 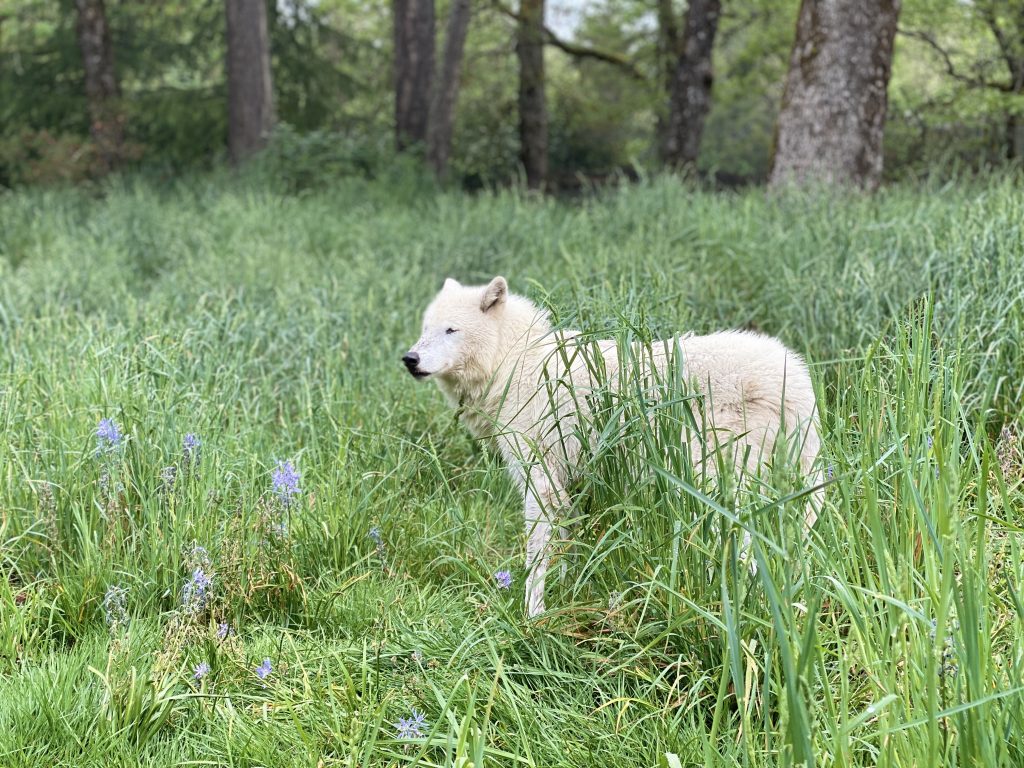 As recovery programs were launched for the highly endangered Mexican and red wolves, Wolf Haven became a captive breeding facility to support those programs. Wolf Haven is one of only three prerelease facilities in the country for Mexican wolves. Three families of Mexican wolves originating at Wolf Haven have been released in the wild in the Southwest and Mexico. 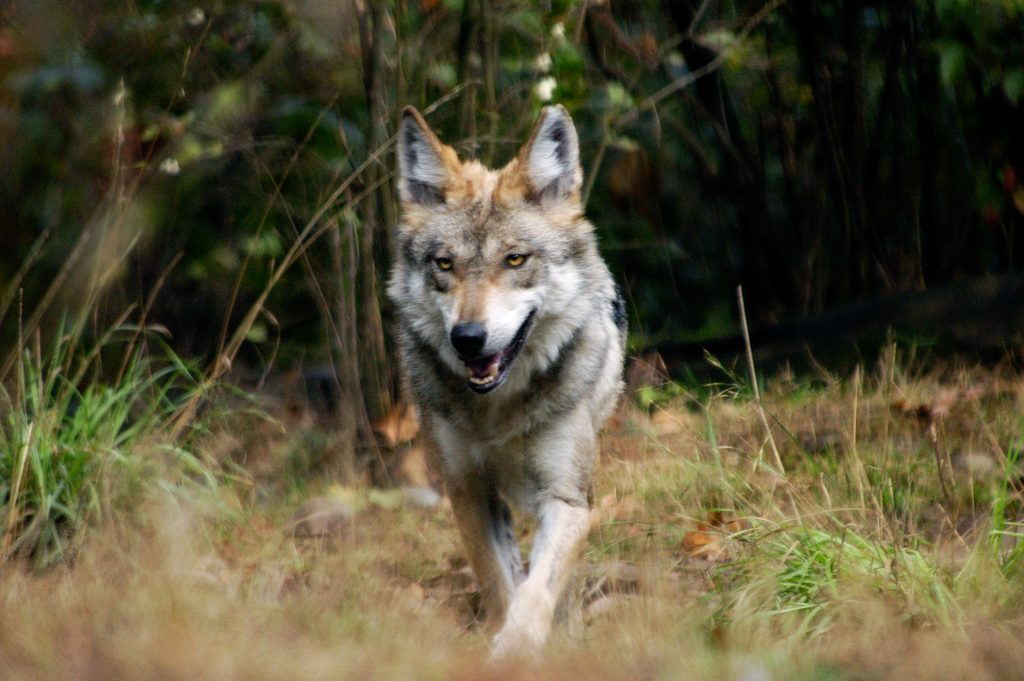 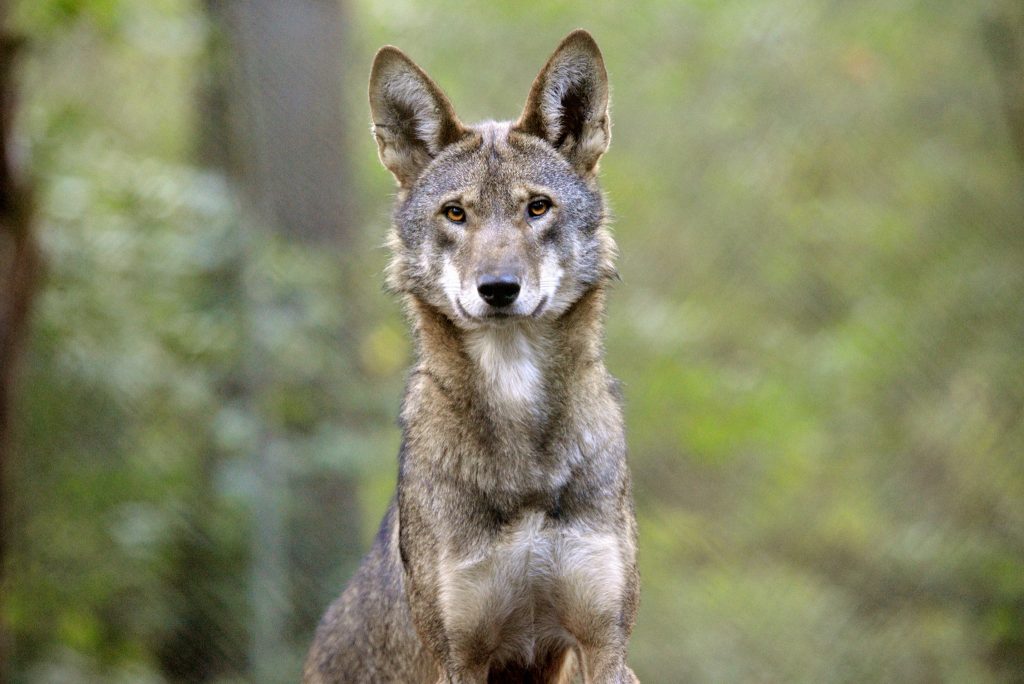 Concern over development encroaching on the sanctuary caused Wolf Haven leadership to purchase nine adjacent lots. They were covered in scotch broom and the mounds were barely discernible. So much has changed!

While we have sequestered ourselves, sheltering at home during the COVID-19 pandemic, the prairie of Wolf Haven has come alive with rich color, texture and diversity and the wolves have flourished during their first winter of undisturbed quiet. The Wolf Haven prairie has been intensely managed for more than 2 decades. As our knowledge of how to best manage Puget Sound prairies has increased, the condition of Wolf Haven has shown constant improvement. Tree removal, control of invasive grasses and shrubs, the implementation of regular prescribed fire and heavy planting of locally propagated seed collected from native plants has created a high-quality prairie, which highlights our Puget Sound prairies on a relatively small footprint. 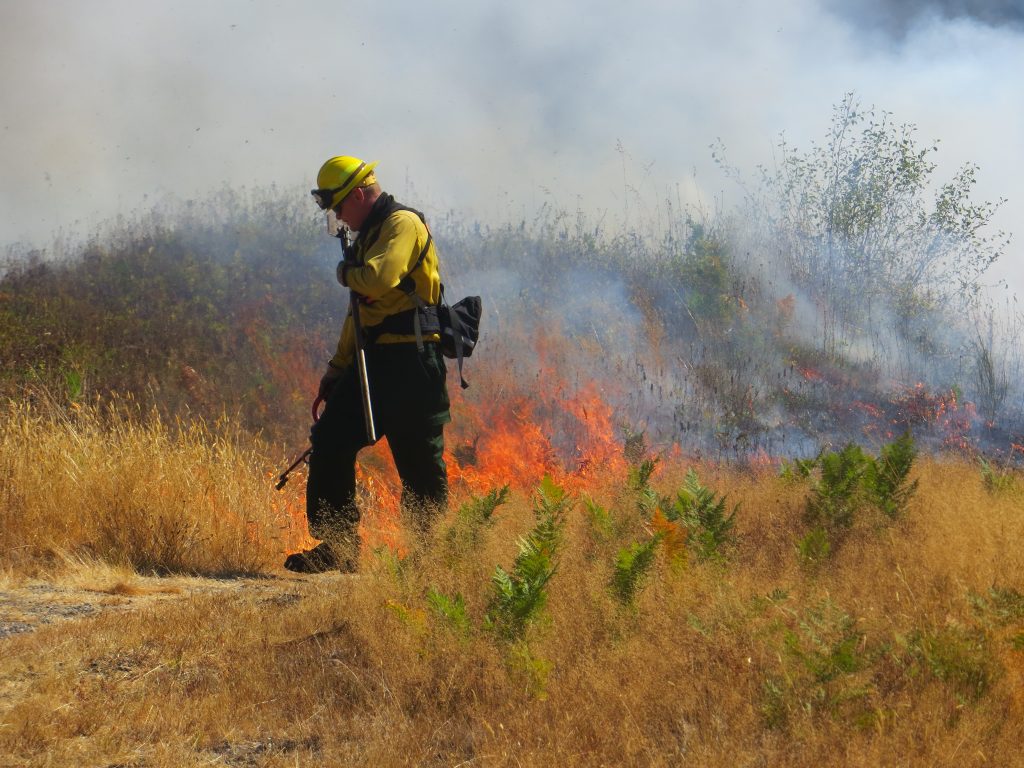 At this time, if you were to visit our local prairies virtually or at Washington DNR or DFW properties at Mima Mounds or Scatter Creek you might see late blooms of common camas (Camas quamash), but more likely you will see their seed pods developing. 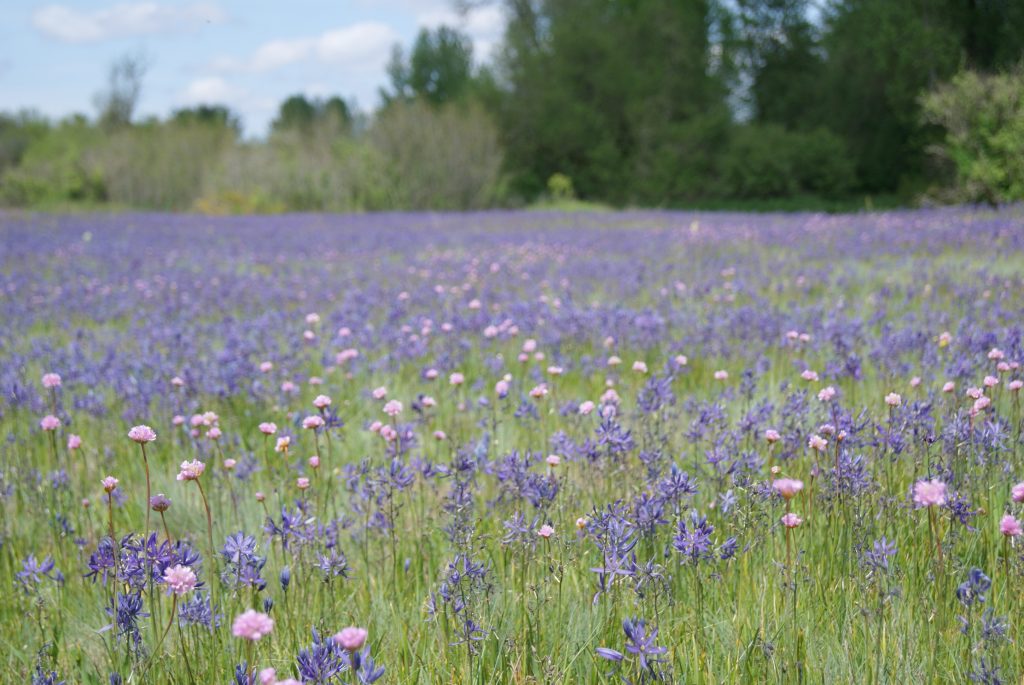 Early blue violet (Viola adunca) may be found blooming now and continues to bloom into the fall. In the wetter portion of prairies, you might find giant Camas (Camas leichtlinii). Also, in the wetter areas of the prairie you will find shooting star (Dodecatheon pulchellum or D. hendersonii). Our local lomatiums or biscuitroot, Spring gold (Lomatium utriculatum) may be blooming now and later this spring, nineleaf and barestem biscuitroot (L. triternatum and L. nudicaule) will show up. Pink microsteris (Microsteris gracilis) can be found blooming on areas recently disturbed such as road cuts or trails, it is a native annual that behaves like a nonnative in its ability to establish abundantly in disturbed areas. Our annual lupine (Lupinus bicolor) can be found now and will be soon followed later in the season by sickle-keeled lupine (Lupinus albicaulis), which is developing large buds at this time. One of my spring favorites that is blooming now or may be completing is bloom is our lovely, graceful red columbine (Aquilegia formosa). And lastly I will speak of our native paintbrush species, which bloom at Wolf Haven. The golden paintbrush, Castilleja levisecta), as mentioned earlier is a Federally threatened species that has received tremendous conservation interest for the past several decades and is doing well on prairies where it receives management to promote its continued existence, like Wolf Haven. If you are out on our local prairies try to make sure you see this species; it is well represented at Wolf Haven and Mima Mounds. 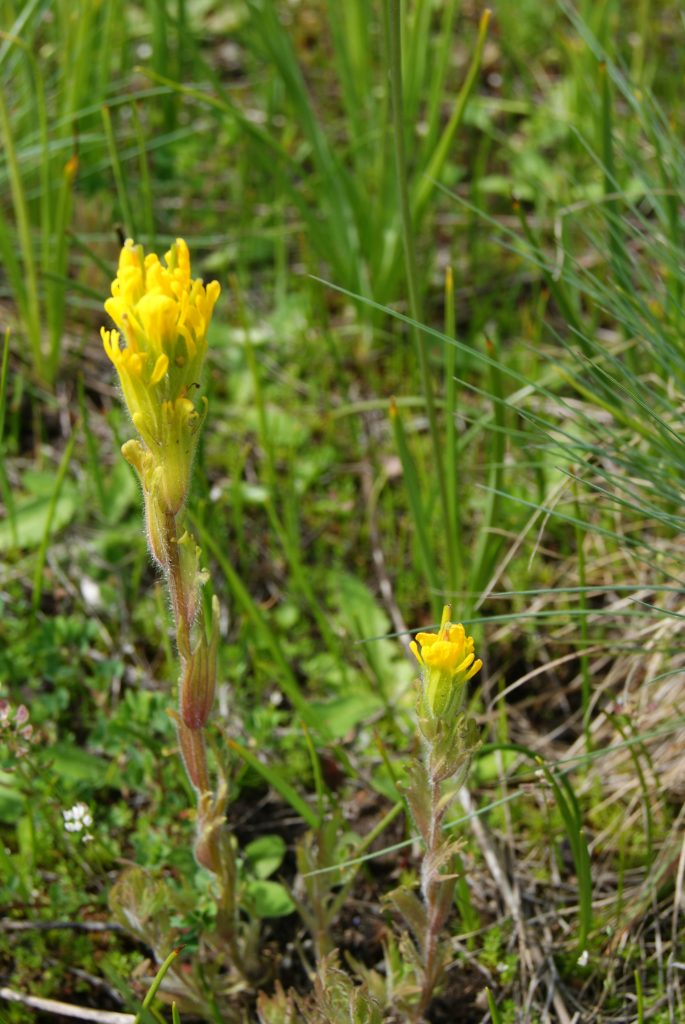 The diversity of plants found on our south Puget Sound prairies is astounding and has been well described in the recent treatment by Bowcutt and Hamman 2016 “Vascular Plants of South Sound Prairies”. As many as 278 vascular plant species are known to inhabit South Puget Sound prairies, nearly 60% of them are considered native species (Dunwiddie et al. 2006). This means we have many nonnative plants occupying our prairies, many are of Eurasian origin and are common to Wolf Haven. Many of these are pasture grasses such as orchard grass (Dactylis glomerata), sweet vernal grass (Anthoxanthum odoratum), which are both in great abundance at this time of spring. Other grasses like tall oatgrass (Arrhenatherum elatius), velvet grass (Holcus lanata) and colonial bentgrass (Agrostis capillaris) may be dominant later this spring/summer and compete for space with our native grasses and forbs. Some common nonnative forbs include hairy cats-ear (Hypochaeris radicata), English plantain (Plantago lanceolata), sheep sorrel (Rumex acetosella), oxeye daisy (Leucathemum vulgare) and St John’s wort (Hypericum perforatum). Each of these will become more abundant and noticeable as the season progresses, but their vegetative parts are evident now as we walk across the prairie. Another nonnative I have noticed blooming is common stork’s-bill (Erodium cicutarium).

Enjoy the prairies, they are a blessing for us to observe. We all should be thankful that our south Puget Sound prairies have received the attention and the management they require to sustain themselves. Many thanks to our Natural Resource agencies (U.S. Fish and Wildlife Service, Washington Departments of Natural Resources and Fish and Wildlife and JBLM), the private landowners (including Wolf Haven) who conserve their grasslands and to organizations like the Center for Natural Lands Management who plan and implement the great conservation skills needed to sustain our local prairies.