The Vampire Orobanche, Post and photos by Ivy Clark

A look back on the dark story of a prairie parasite for the stormy days. 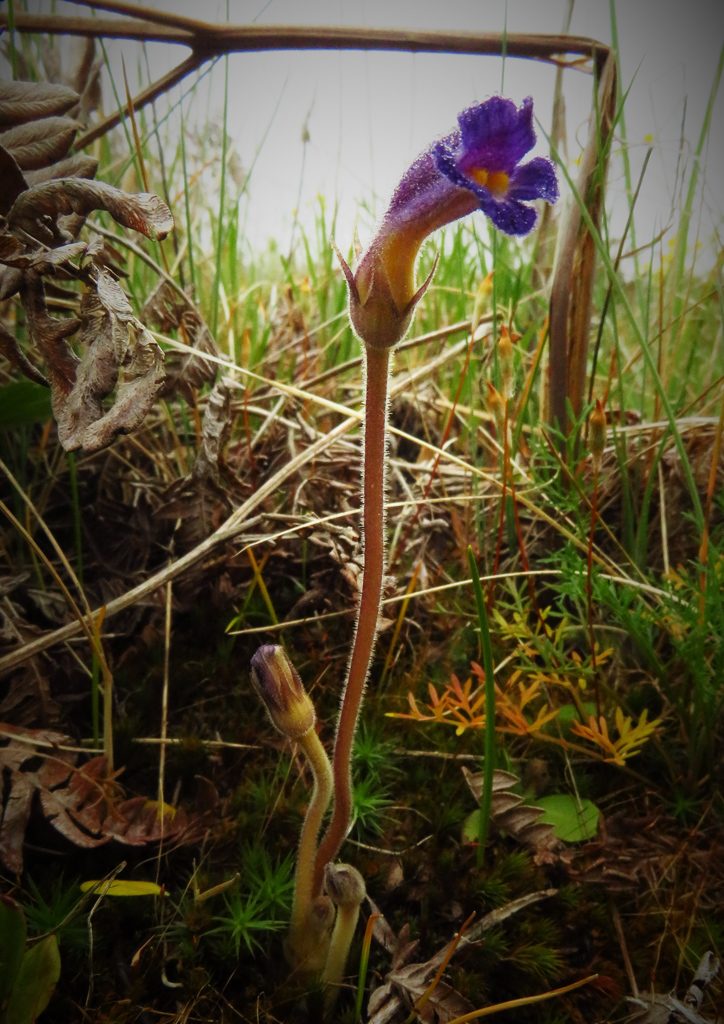 The Vampire Orobanche uniflora below the ruins of a bracken fern. Photo by Ivy Clark

It was a dark and stormy prairie. The oscillating early spring was in turmoil from emergence, newly burning sun streaks, and the biting chill and rain. And something underground. Something underground that lurks silently: unseen, unheard, but always there. If you know where to look. And if you dare. From coast to coast of states united, from southern border to up beyond the northern, across our whole nation and more it hides. Unseen by most. Waiting. It has been known by many names, including “the plant that should not be named”. In this day its name incites unease. What is in a name? An identity? A history? Or something deeper? 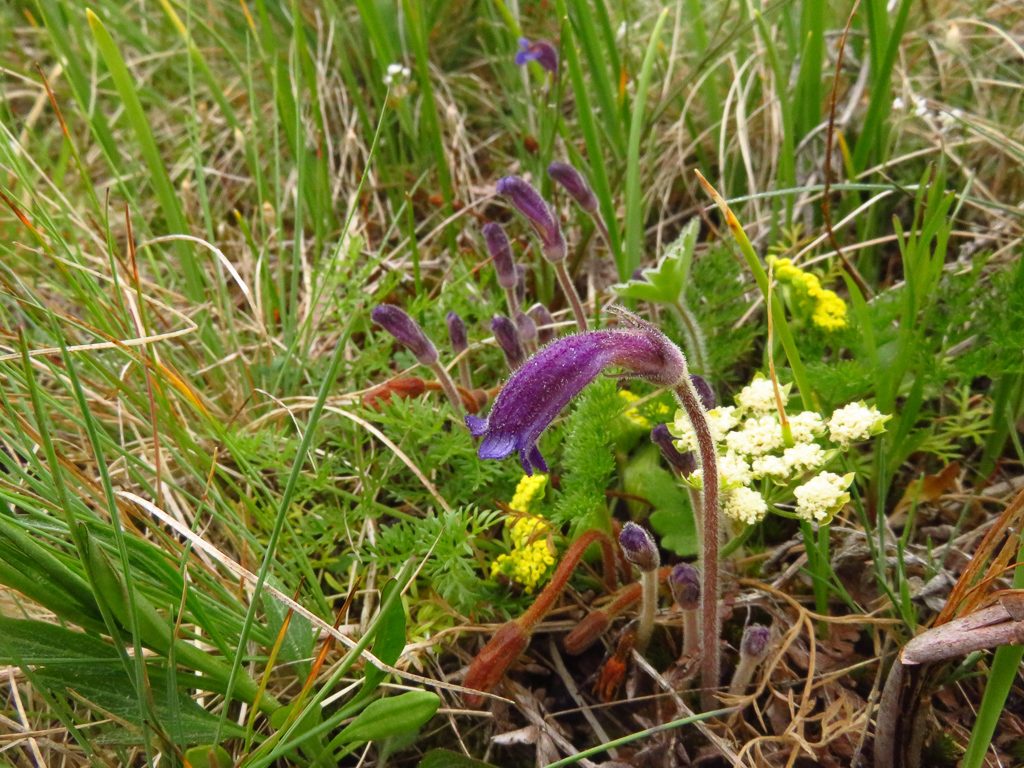 Colony of naked broomrape among a Lomatium utriculatum. Photo by Ivy Clark

There are hundreds of its kind scattered all over and yet seldom encountered, and each a different flavor of wicked. Some have always been among us, feeding on the locals slowly and gently. Some are new comers to these shores, wreaking havoc upon our crops, draining their sustenance before they reach our lips. One stalks our Northwestern lowlands, only seen by the patient eye that looks very low, very close to their resting bed. It is Orobanche uniflora, the “one flower” (uni-flora) because she erupts singular smoky purple pipe-like flowers while all other Orobanches sprout clusters like multi-eyed beasts of the fairy realm. Their names are spoken in hushed tones and hurried whispers; Orobanchaceae the broomrapes. Whether naked, spiked, or one flowered, Orobanche species’ dark secret is encompassed at the very name, for “orobos” in Greek refers to vetch plants and “anchein” means “to strangle”. Hence it is the plant that strangles vetches. From Latin, the broomrape once had a much different meaning than it conjures today. “Rapum” was the name for tubers like turnip, or any such plant akin to the sharp and bitter mustard plants. You now know what seeds we steal rapeseed oil from. Brooms are another name given to vetch plants that are often seen growing alongside their strangling namesakes. So the broomrapes were thought of as tubers off these vetches, and possibly stranglers of mustards. The olden time naming ones, scribbling titles in the ancient books branded these small unassuming plants with names that would then mutate and darken. They didn’t know the family’s subsurface secret. But when they learned to call them cancer roots, that is when the shade became lifted from their widened eyes. For the broomrapes, the cancer roots, the Orobanche, are pure parasites. The “cancer” refers to the ominous knobs they emerge from and is not a reference to any person’s cancer. 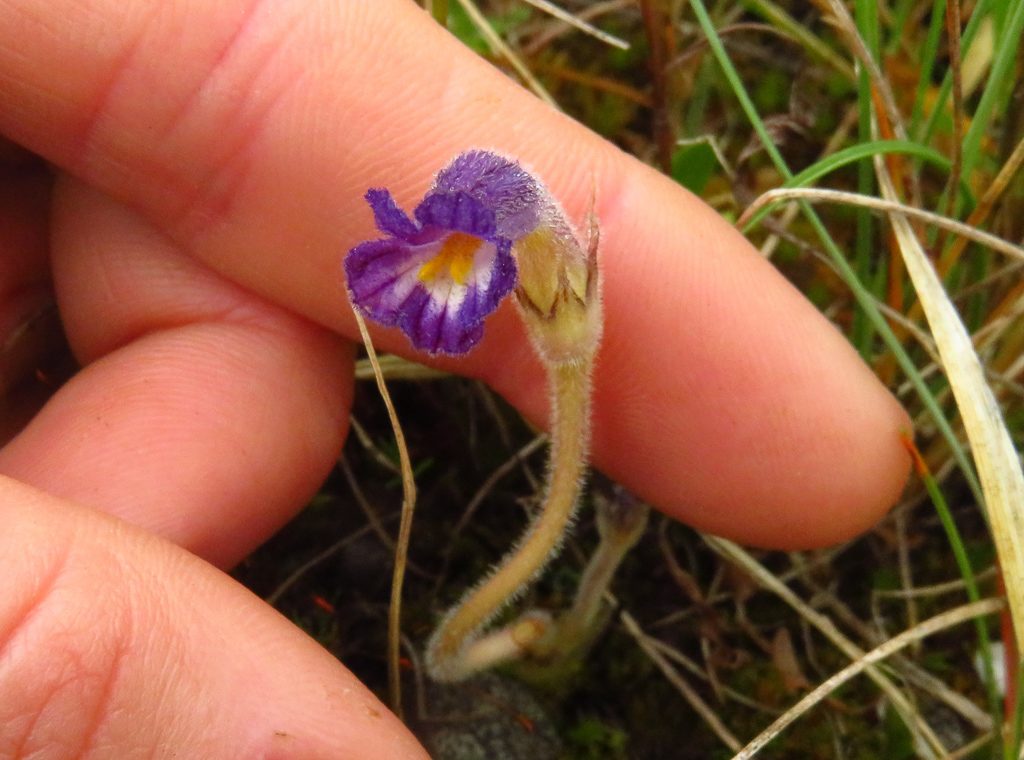 Where the small and unassuming Orobanch uniflora grow, no daisy, legume, or sedum is safe whether in a damp wood or open exposed field, even in your own lawn. Unlike the better known facsimile of the Indian pipe, similar only above the dark soil surface, Orobanche is a vampire. Indian pipes are an eerie looking harmless type of saprophyte, merely eating the dead remains of others and releasing what nutrients are locked within death’s cold embrace. But Orobanche is a true vampire, a full parasite feeding upon others as they live and breathe and grow. Though growing slower with the earthly bite of Orobanche soft and stubbornly laid upon their roots. 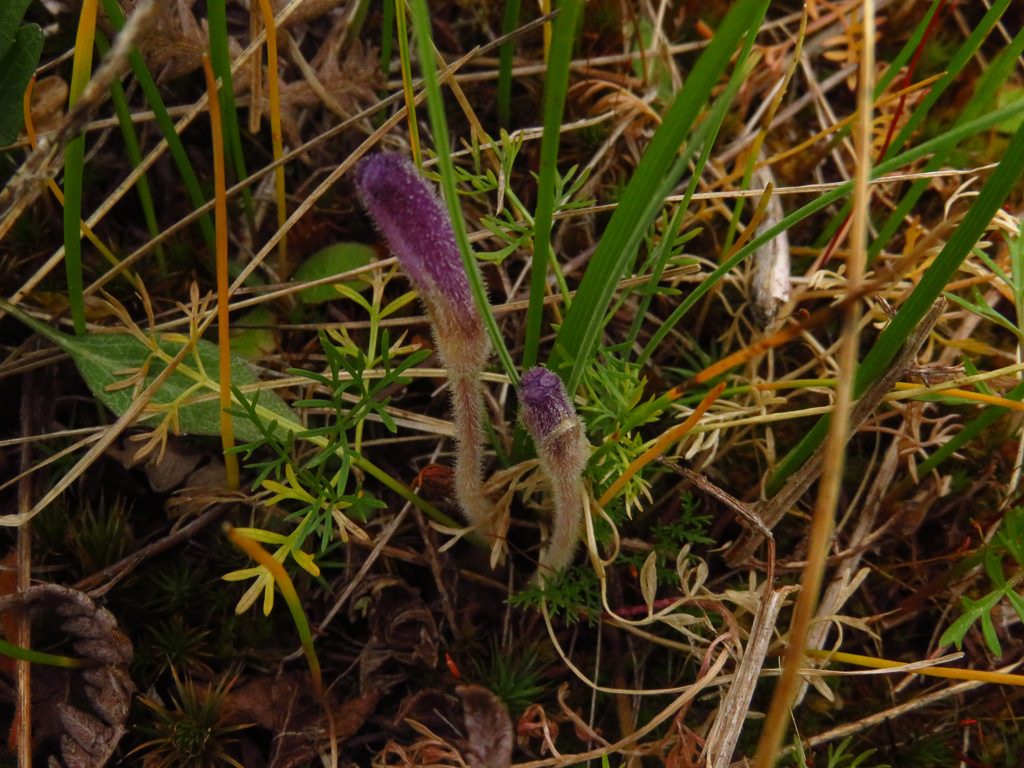 Mature enough hosts unknowingly release a biochemical lure that triggers the minute long-waiting Orobanche seeds to erupt from their shells, initially scattered far by the whipping prairie winds. They grow first as little more than transparent wisps that will perish if further than 3mm from a needed host root. Deep below the soil where the damp holds for ages, the fleshy somewhat tubular mass sends out a searching tendril that clasps at unsuspecting new hosts. Once the haustorium makes its predatory bond (think of them as vampire teeth in snaking root form) there is no hope for the unwilling host. They lay a strangle hold upon the victim’s root in an underground, unseen, slow-motion dance as their haustoria penetrate and seal connections over the goldenrod or saxifrage root. Then they draw at will upon the vasculature, the life blood, of the victim.

Orobanche long ago gave up on producing its own food, not bothering to make chlorophyll with its leaves mutated and shrunken to little more than reptilian scales. It is a relative of the often hemi-parasitic and fellow haustoria-producing family of Scrophulaceae like paintbrushes (see golden paintbrush below), though they look entirely different and hemi-parasites can go a full lifetime without feeding on others. But Orobache needs to feed from the very start to their last days. Their first root or radicle sniffs out the biochemical exuded from their victim like a blood hound tracks a scent, and must be close to quickly start its feeding before it runs out of its small seed-store of nutrients. 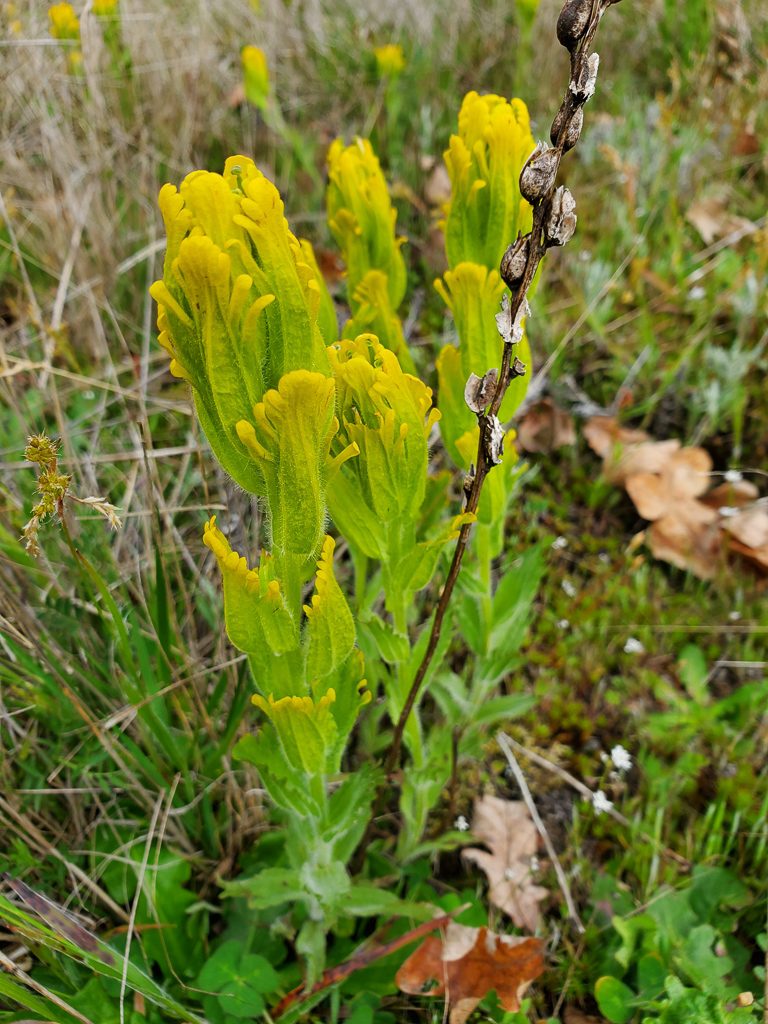 Once locked upon a root to suck from, the vampire Orobanche quickly engorges the upper portion into a nodule, swelling like a tuber. Then it sprouts new reaching tendrils that lurch towards the host roots, attaching in new places, and locking a firmer and firmer hold, ever feeding and draining. Yet a mature enough host may barely show a strain, like the vampire bat lapping an insignificant amount of blood from a full size cow. Soon the mass swells higher into a shoot, looking more like a docile photosynthesizing plant we well know. 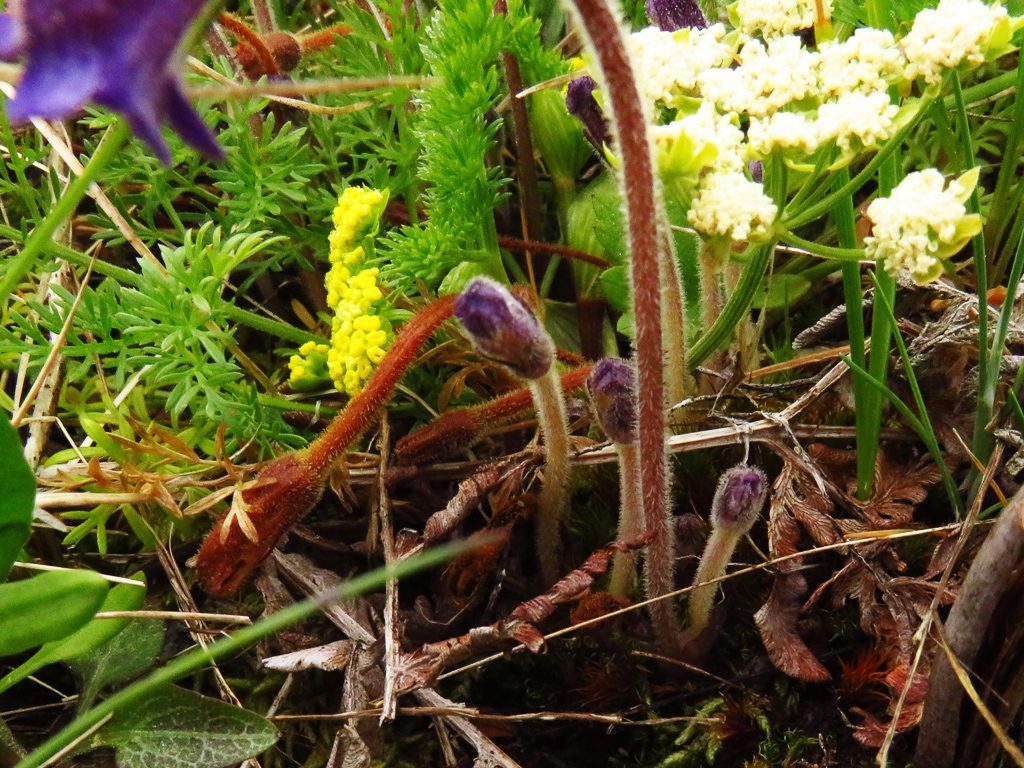 Colony of naked The next flowers emerging below a fully open Orobanche pipe. Photo by Ivy Clark

After several weeks of feeding and swelling and distending, briefly they erupt above the crumbling soil purely to reproduce and spread their seed. And the search for more victims begins anew. They lay in wait for years, quietly and patiently sniffing for their next prey to happen near. Careful where you step my dears. If fear grips you as an exotic noxious Orobanchacea species feeds too much upon your tender crops, a few species of alluring biochemical-producing plants may trick the pest into germinating its seeds but not be able to connect and sap life from their roots. These plants include bell peppers and coat buttons (Tridax procumbens) and thus act as does garlic to bloodsucking undead, reducing a noxious infestation. The native vampire Orobanche uniflora is still beautiful and a beguiling uncommon wicked little gem. Be glad they don’t feed on us, and dare to take a peek into the small throat of the singular naked hairy purple pipe flowers. I’m pretty sure they don’t bite, but best to not poke even a little bear, don’t you think? A rose by any name still has thorns after all. 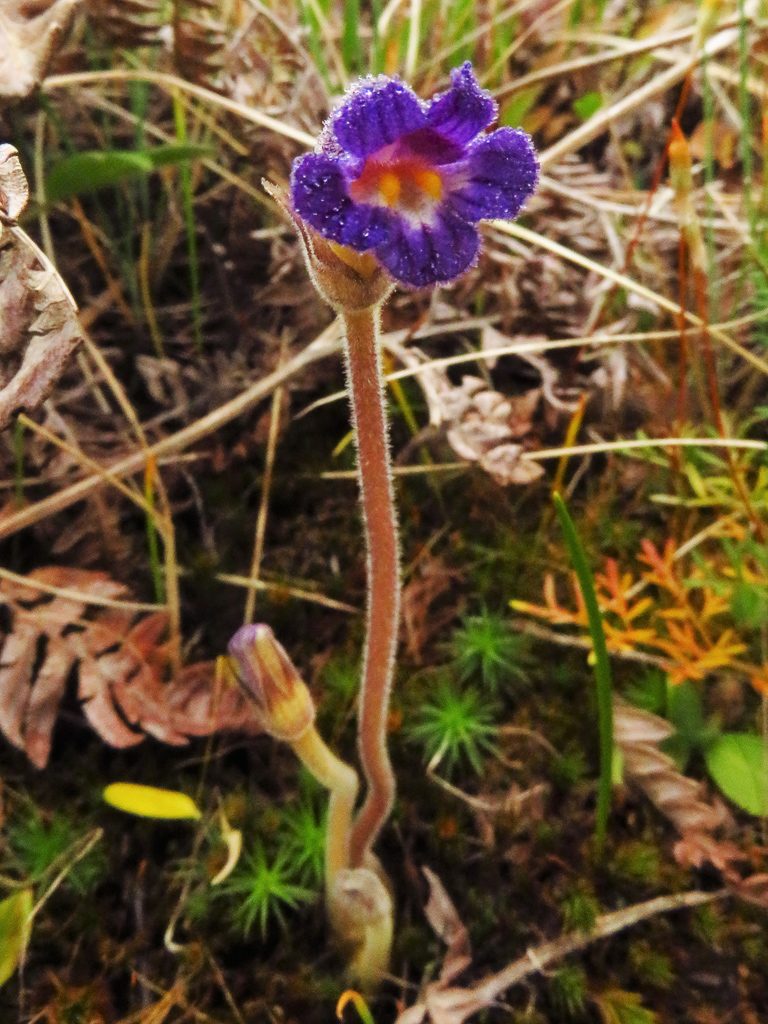 The shallow throat shows the pollen laden stamen within. Photo by Ivy Clark

Additional reading including a similar page on their haustorium connections and semblance to vampires.