The Camas, though not spectacular this year is just about over. Now it will start forming those wonderful “castanets” of seed pods that rattle as we walk through the prairies a month or so from now. Similarly, the Spring Gold is pretty well past, though it’s yellow will remain with us a while longer, as it continues to put out new blossoms longer than the Camas.

In their place, the early Goldenrod (Solidago simplex) is starting to bloom in abundance. While not a particularly impressive plant, the racemes of gold composite flowers are still quite showy, especially when there’s a patch of them. I love their little puff balls when they go to seed, but we’ll save those for later. 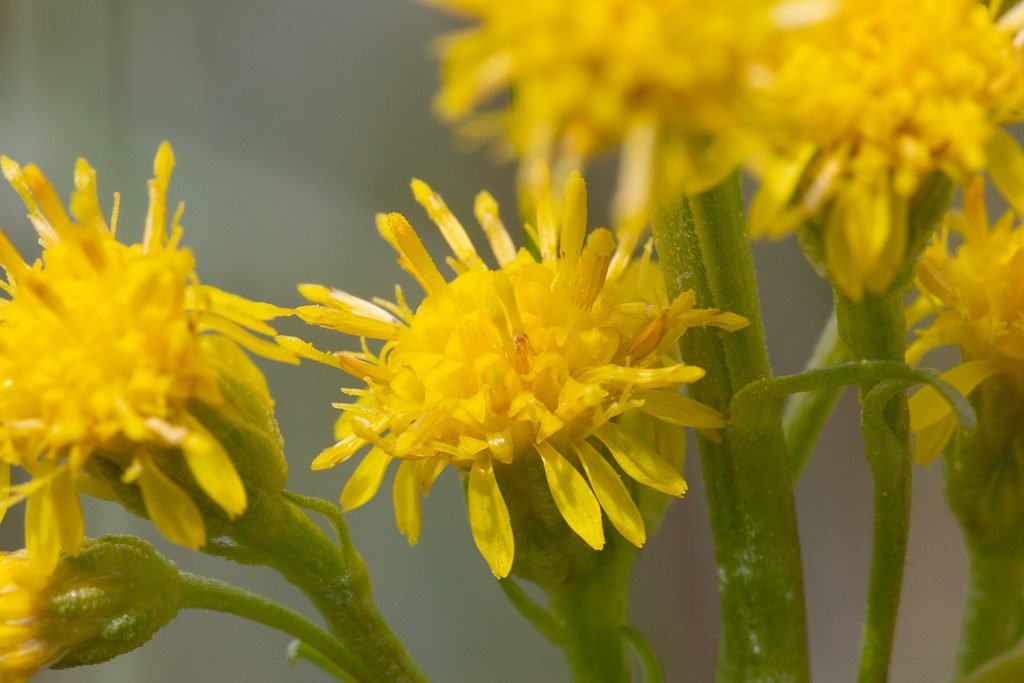 Death Camas (Toxicoscordion venenosum) is just getting started. The one furthest along that I’ve found thus far has the two bottom rows of buds opened, but that’s as far as it’s gotten here. With that scientific name, no one should even think about eating this plant, and given the large difference between it and common camas in the blooms and seed heads, a mistake seems unlikely most of the summer. Besides, the side effects described from eating camas don’t exactly encourage it’s adoption as a staple starch.

Miniature Lupine aka Small-flower Lupine aka Two-color Lupine (Lupinus bicolor) is blooming profusely near the road end of my driveway. This little annual seems to like desolate looking areas. Where it grows here is in an area of moss and very thin soil. The first time I recall seeing it was in the middle of one of the roads on Glacial Heritage Preserve. It rarely gets more than 5 or 6 inches tall here, though “Vascular Plants of the South Sound Prairies” says it can get up to 40 cm (16 inches), I’ve never seen it anywhere close to that. I went out and measured some plants yesterday and they ran from about 3-4 inches in height at this stage, though they will continue to grow awhile. The flowers were 0.10-0.12 inches across and the seed pods at their current stage of development were about 0.8 inches long. Very inconspicuous little flowers, but one of my favorites. 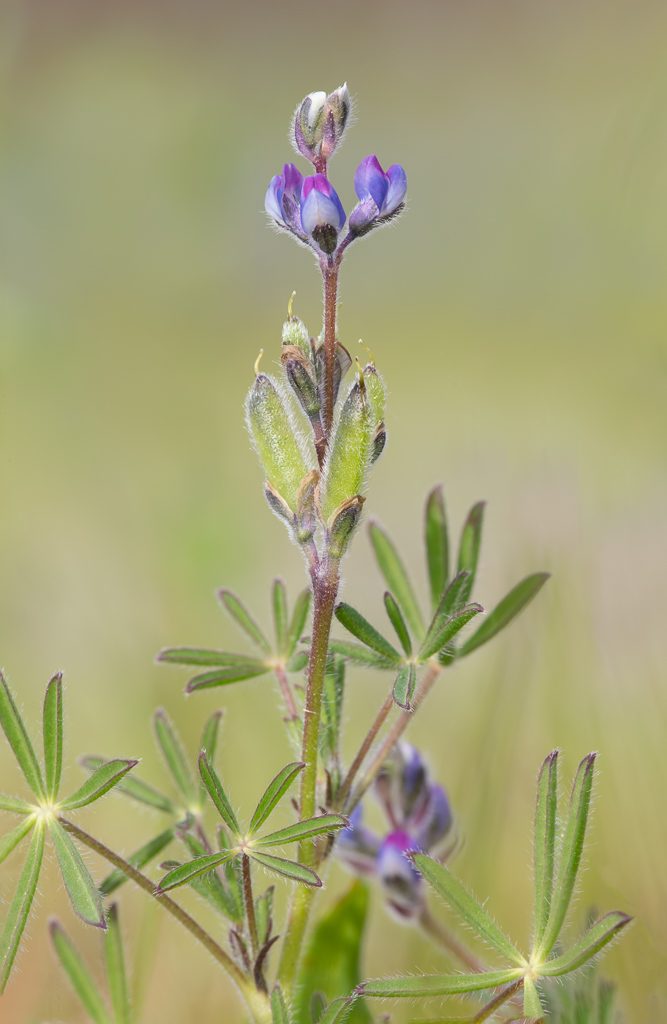 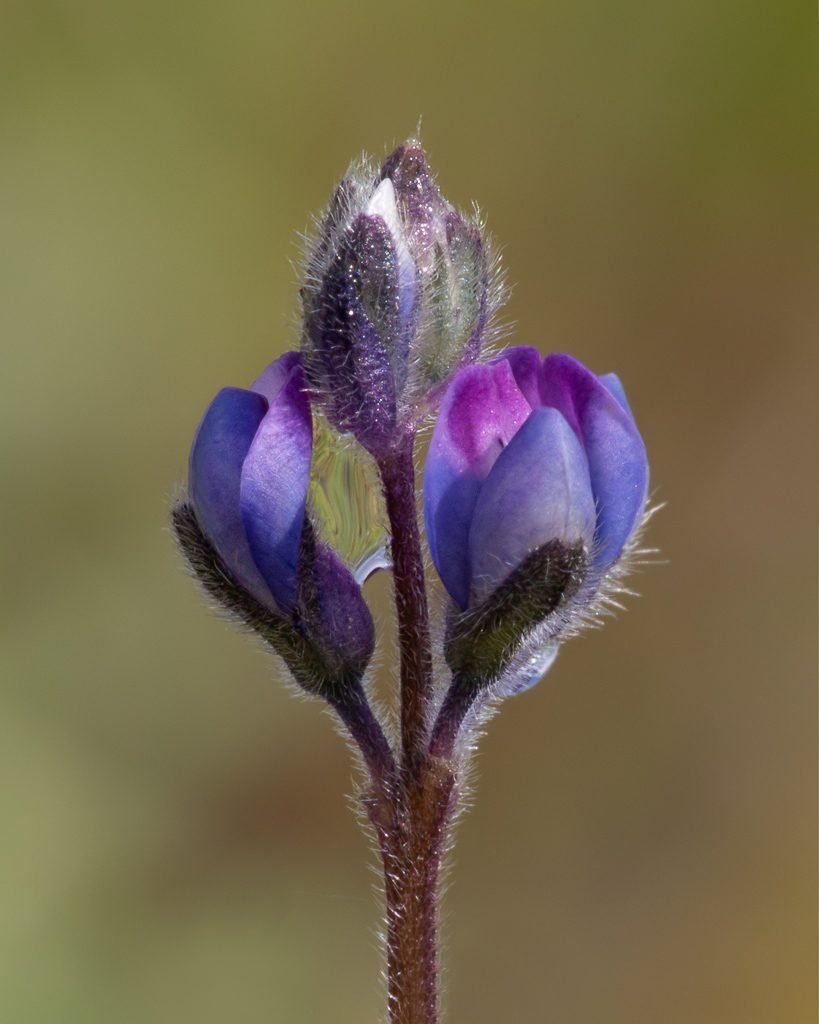 A close-up of the tiny flowers of this plant. Photo by Dennis Plank

Much more common on our property is the much larger Lupinus albicaulis which is just starting to show flower buds and I’ll discuss that plant and another lupine as they start to bloom.

Another flower that can be pretty easily missed on our property is Blue-eyed Grass (Sisyrinchium idahoense). Don’t trust your spell checker on that one! Mine came up with “trichinosis insecticidal”! In the cool damp mornings we’ve been having lately it just looks like a clump of grass blades 6-8 inches tall with rather feeble pale blue pennants hanging from the tips. As the day warms up and the blossoms open they look like the photo below and are utterly gorgeous. They’re attached to the tip of the “grass blade” by a thin twig and can bounce around in the breeze very easily which makes them something of a challenge to photograph, particularly on the prairie where it is rarely completely windless. I used an umbrella to block the wind and provide some shade when I took this photograph, but it did mess with the color a bit which had to be fixed. 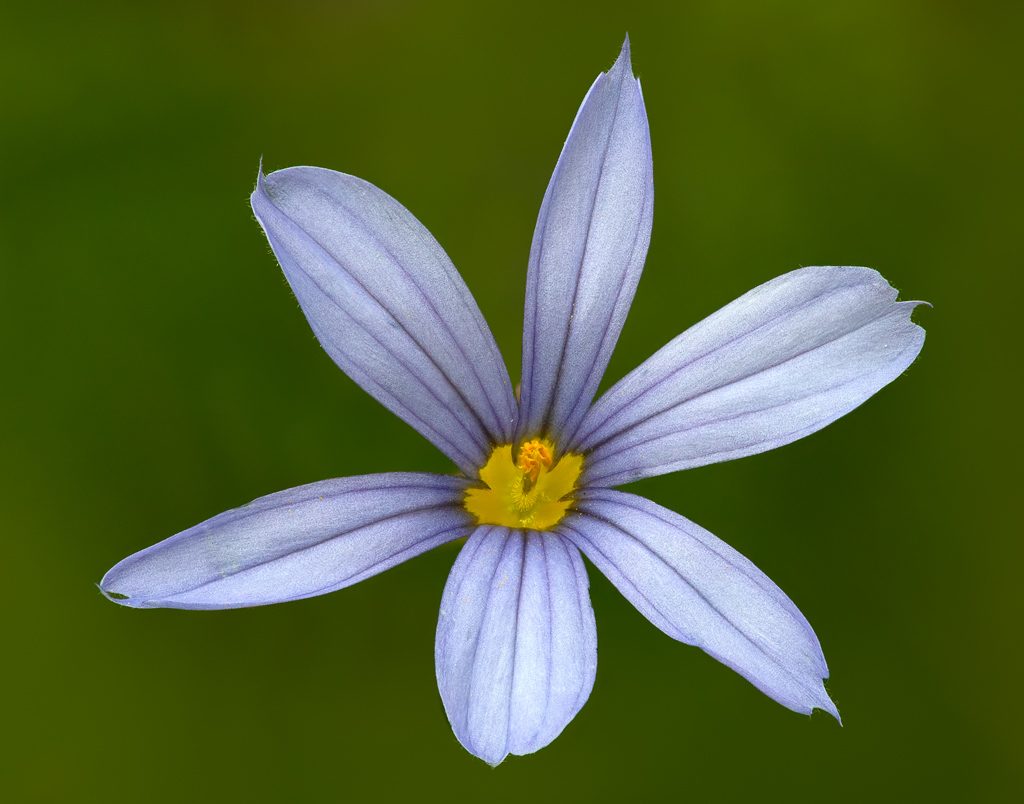 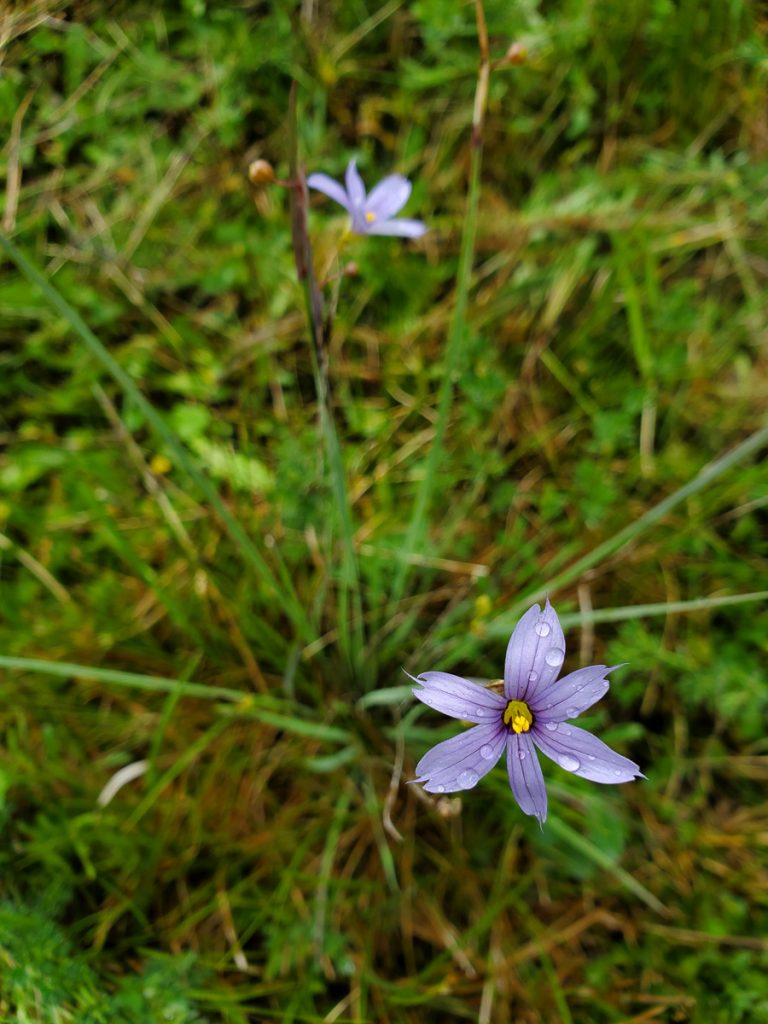 A better view of the whole plant. Photo by Ivy Clark

The native Red Columbine (Aquilegia formosa) in my gardens (We don’t have any naturally occurring on our property) is blooming now and will continue to do so for quite some time if it gets enough water. It should also be blooming in some of the swales on the public prairies. This picture was taken on the Glacial Heritage Preserve a few years ago. I took a number of images that year because there were some interesting color variations showing up. 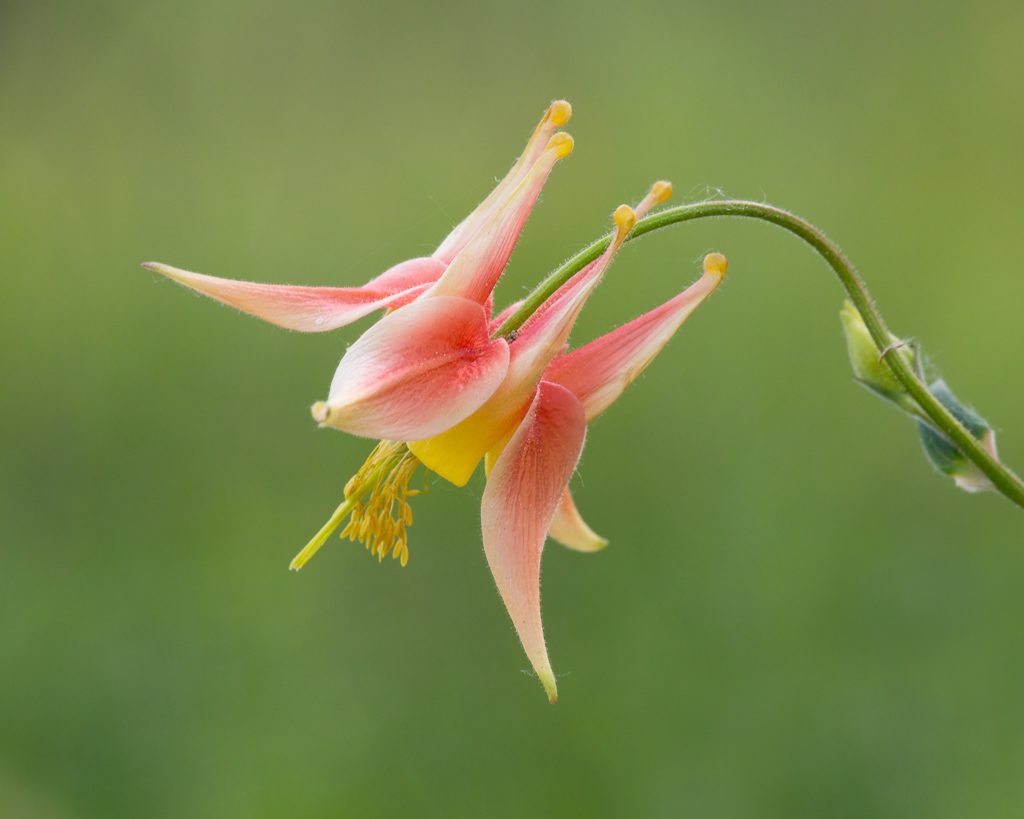 The hummingbirds like this plant and are good pollinators for it. 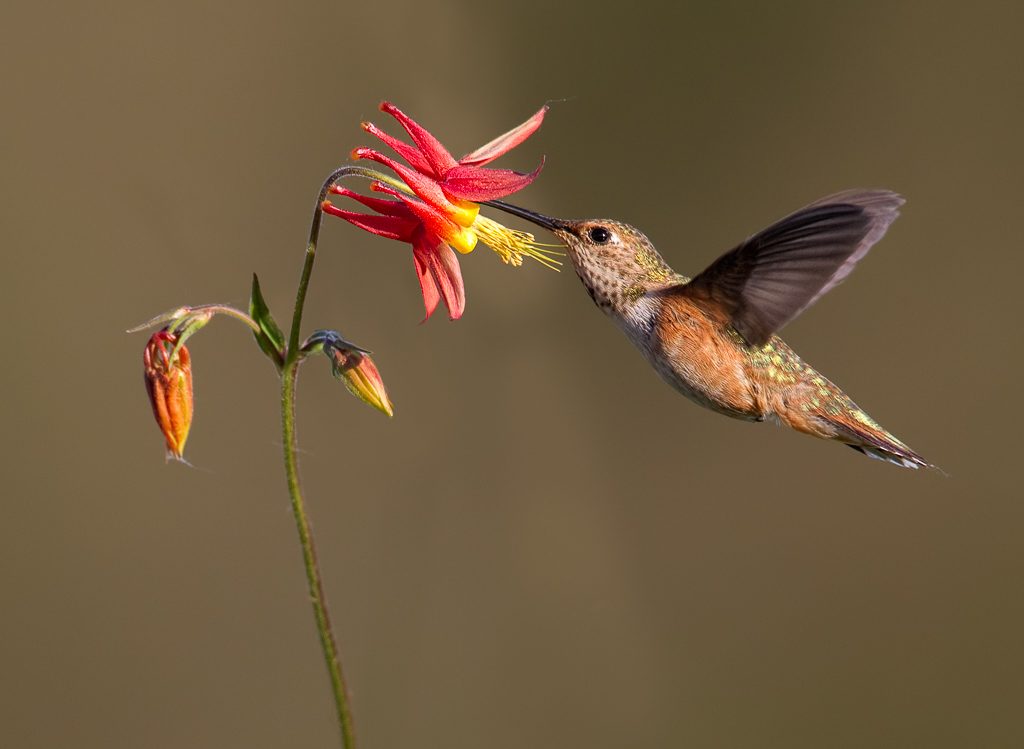 Hummingbird nectaring on Columbine in my garden. Photo by Dennis Plank

And other birds will sometimes use it for their own purposes, even if it’s just to perch on. 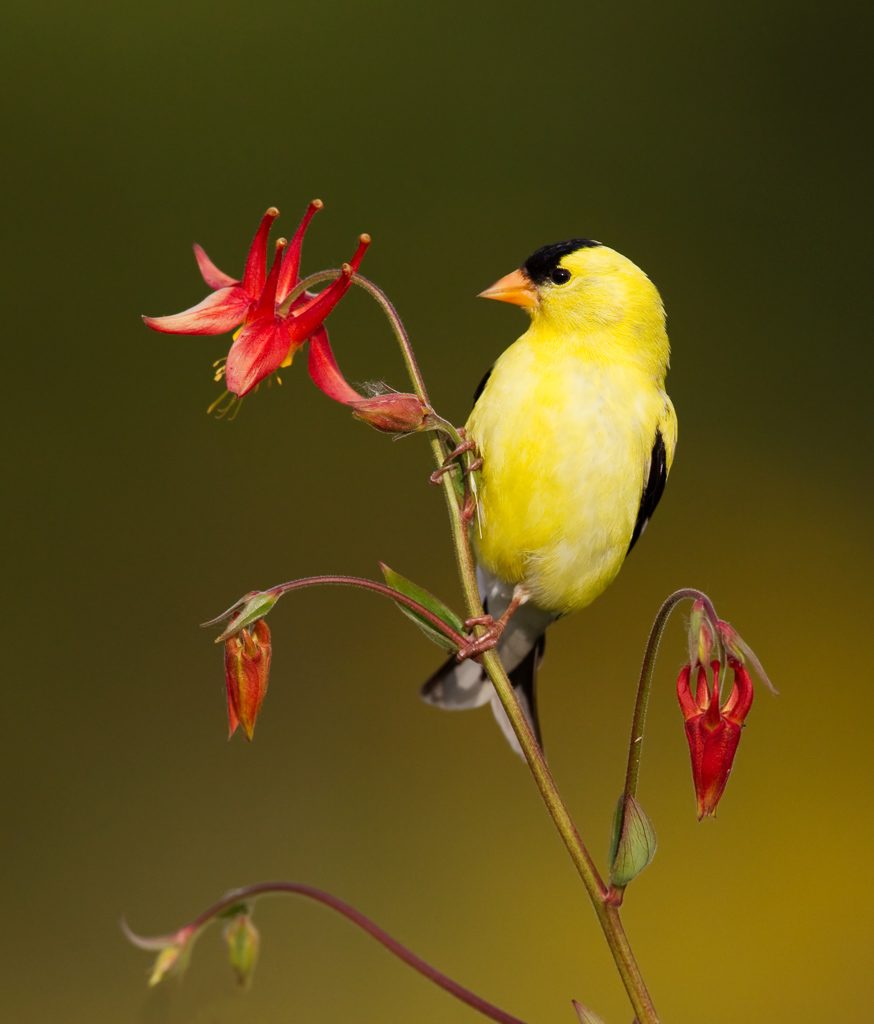 American Goldfinch perching on Columbine. One of my all-time favorite photographs. Photo by Dennis Plank

This coming week we’ll be having a couple of guest posts on restoration of rarer species of birds on the South Sound Prairies.

Stay safe and find a prairie to enjoy,