Prairies Can Have Resolutions: And Won’t Break Them

Resolutions: a note from the editor

Now that it’s Groundhog Day and all those resolutions we made have been blissfully ignored into oblivion, maybe it’s time to sit back and look at what went wrong and make some new ones that we can actually achieve. Our regular contributor, Ivy Clark has some great ideas. And maybe we can all resolve to get out and help the planet a little more-whether it’s the prairies or the waters or the forests.

Prairies Can Have Resolutions: And Won’t Break Them, Self-help lessons from the prairie,  Post and images by Ivy Clark

Prairies Can Have Resolutions, and Won’t Break Them:

Self-help lessons from the prairie

Yes…we’re using that January buzz word in the prairie blog, like pumpkin spice in October. And it may seem too unpredictable and scary in the world outside the gentle rolling mounds of winter-golden prairies right now, but I promise to make it fun & maybe even helpful to YOU if you keep going. Here’s a pretty sunset to remind us the world keeps turning on its axis and the sun will rise again with a new day’s hope and possibilities; or something else from a greeting card. 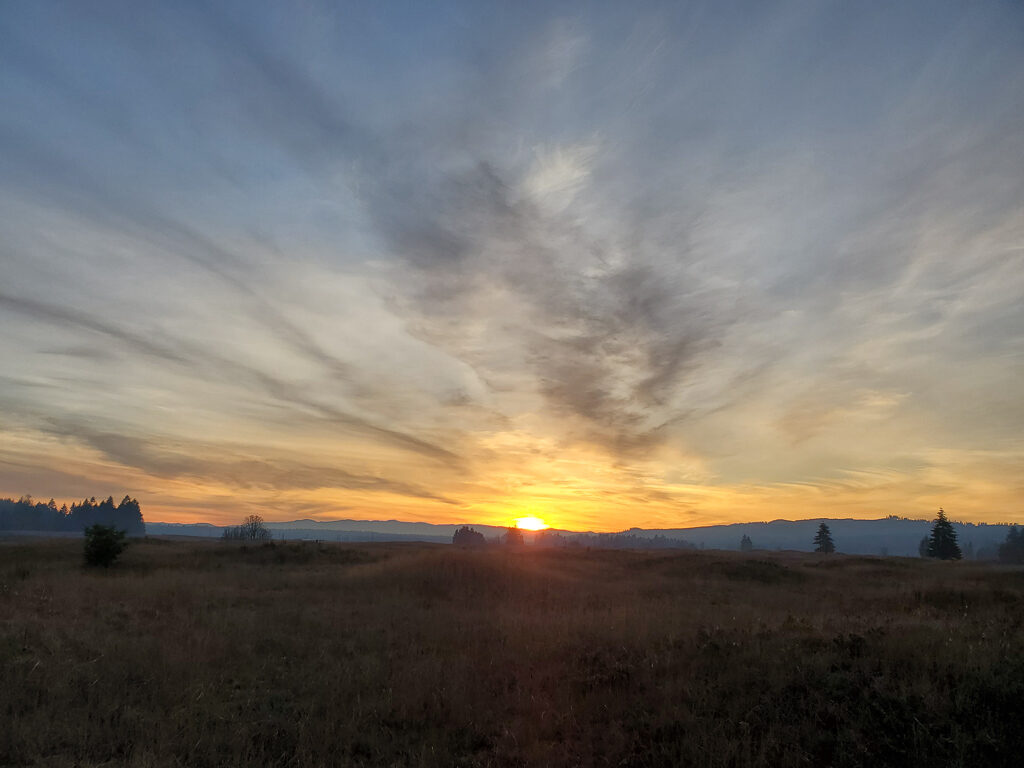 Recent lovely cloud streaked sunset over Glacial Heritage with smoke from neighbor’s burn pile, not ours. Photo by Ivy Clark

In restoration, we always have a goal- a determination- for our prairie sites, usually set at specific times like the start of a new grant or acquiring a new site. Probably more than the average person, we work very hard to keep these “resolutions” for our prairies; the resolution to shed those pesky extra pounds of invasive species, and gain a new six-pack of native ones.

Since you probably have already slacked or even failed on a resolution, if you took part in the custom this year, I have some helpful tips about them to go along how we do them on the prairie. You may have heard before- it’s important to set attainable goals. According to Forbs.com, about 80% of people’s New Years’ resolutions have already failed by February. So maybe our own six-pack abs should be a goal for later years. Make the baby-step goal of a healthier diet, then some added cardio activity once a week, then an attainable reduction in pounds. You get the idea. If you aim too lofty you are likely not only to fail, but also feel terrible and give up entirely, even slip back further from your goals. Our hearts are delicate organs when set on anything. Don’t set them up for failure right at the start. You won’t see us deciding to eradicate every SINGLE non-native plant from a site all in one year, while also keeping the native species- entirely unrealistic. That’s not how we roll… 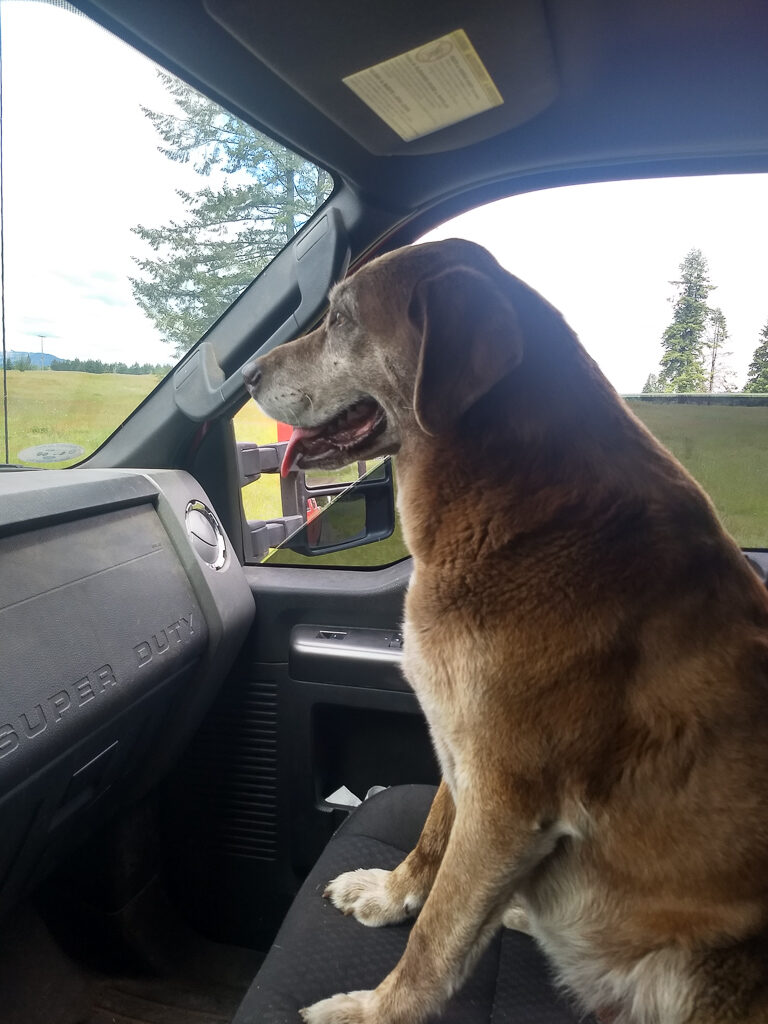 A furry volunteer-greeter, dubbed “Loppers” by me. Hitchin’ a ride to work! Photo by Ivy Clark.

There is also an inverted bell curve in our motivation, which affects a resolution’s success. In the beginning, we are pumped! Our aspirations are sky high, we make a plan, and then jump in! Then the novelty wears off and it feels like work but without any visible gain yet and after the first few all-out efforts, our motivation quickly sounds like a slow trombone slide- fizzles out. If you manage to stick with it, the closer you get to the goal the higher your motivation will climb again. But it’s that valley between that kills most resolutions. Call it “motivation death valley”? It’s actually called the “middle dip of motivation”, but that seems less imaginative. And it can happen fast when we set too high a goal. The cliché personal resolution is fitness and that’s often tackled at a gym (in other years obviously). We can see the results of this motivation death directly through gym memberships, or maybe for this year online workouts enrollment. We see it year after year go up early January then drop dramatically heading into February. One month! That tells me the membership was from a too distant a goal set by a lot of people. But whether it is a goal to get in shape, save more money, volunteer more, get a raise, build a tree house, or learn to cook more than just a peanut butter and jelly sandwich (I’m looking at you sis…) the trick to successfully navigating “motivation death valley” is to not make it so extreme; set the end within reach by setting a series of smaller goals on a longer timeline. We won’t get rid of ALL the weeds on the prairies, but we can pull every visible Scotch broom within a certain unit of set acreage. Then next year, pull the neighboring unit. This taps into what’s called the “progress principle” where the perception of some forward momentum will itself give motivation. I’m sure that’s a law of motion too. It will become self-perpetuating if you can make some early progress. If only we could get abs one at a time… right? Similarly, in prairie ecology, initial achievements will lay the foundation for the end goal/ecosystem, such as clearing the trees from an area to open up new sunny land for prairie plants to expand to and that will support butterflies for the end goal of reintroducing our endangered butterflies. You definitely can’t just toss them in a forest edge and expect establishment. Shudder to think! 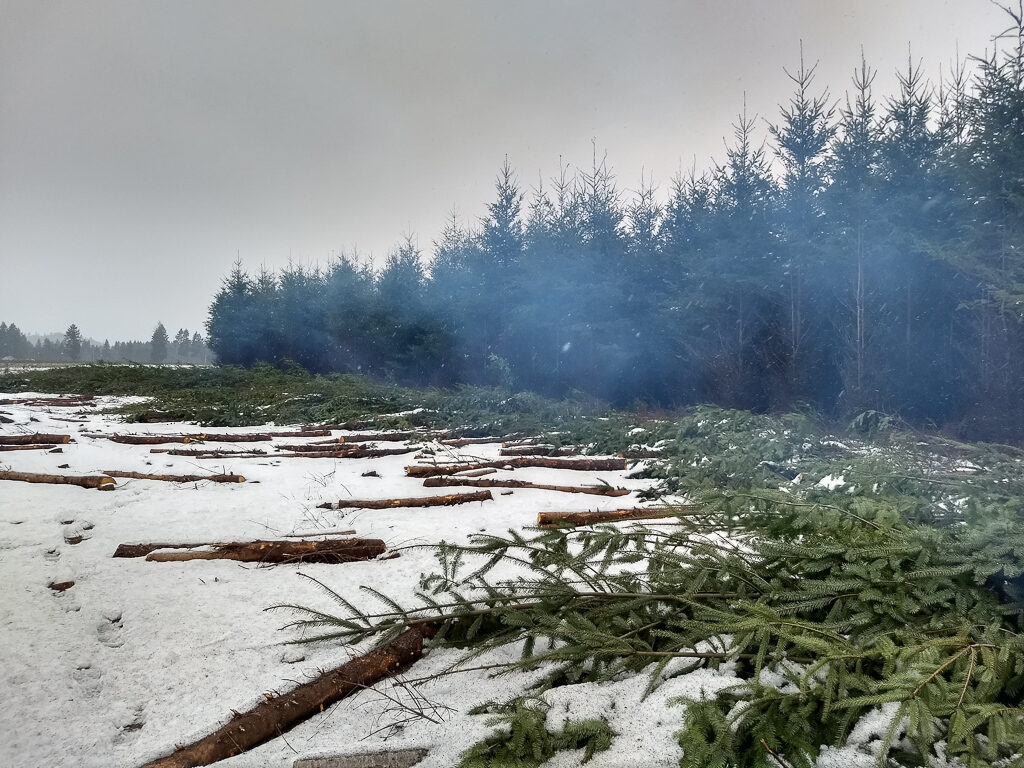 Just like a personal resolution, our prairie goals require a lot more work in figuring out how to achieve them than to pick which one to aim for. We can’t expect 10 more native species to show up on a site without doing anything to make it happen. This is where we set ourselves up for success, the “how”. We figure out where to get the seed from, what’s obtainable in the numbers we need for establishment, and how likely to succeed they’ll be with all the other conditions there. We figure out the many details of a budget, worker hours, timing, etc. And then we get to work and assess progress as we go.

Once you have attainable goals, and planned hard, you can keep motivated and probably won’t fail. That’s good, because failure will come with consequences, even if only as mild as feeling a little bummed and then forgetting about it. Luckily we have a lot more motivation to avoid failing than the average champagne-infused New Year’s Eve aspirational planner, and more risk. It’s like there’s a twisty rope bridge across the “motivation death valley”. It may be scary and very difficult, but we WILL get to the end. Of course life in the field is unpredictable and big things happen like major droughts, sudden budget cuts from economic shifts, or say… pandemics. But those are set-backs, not total stops. Like when your personal trainer understands you can’t do the usual work-out with a broken leg, but you can do some upper body strengthening. 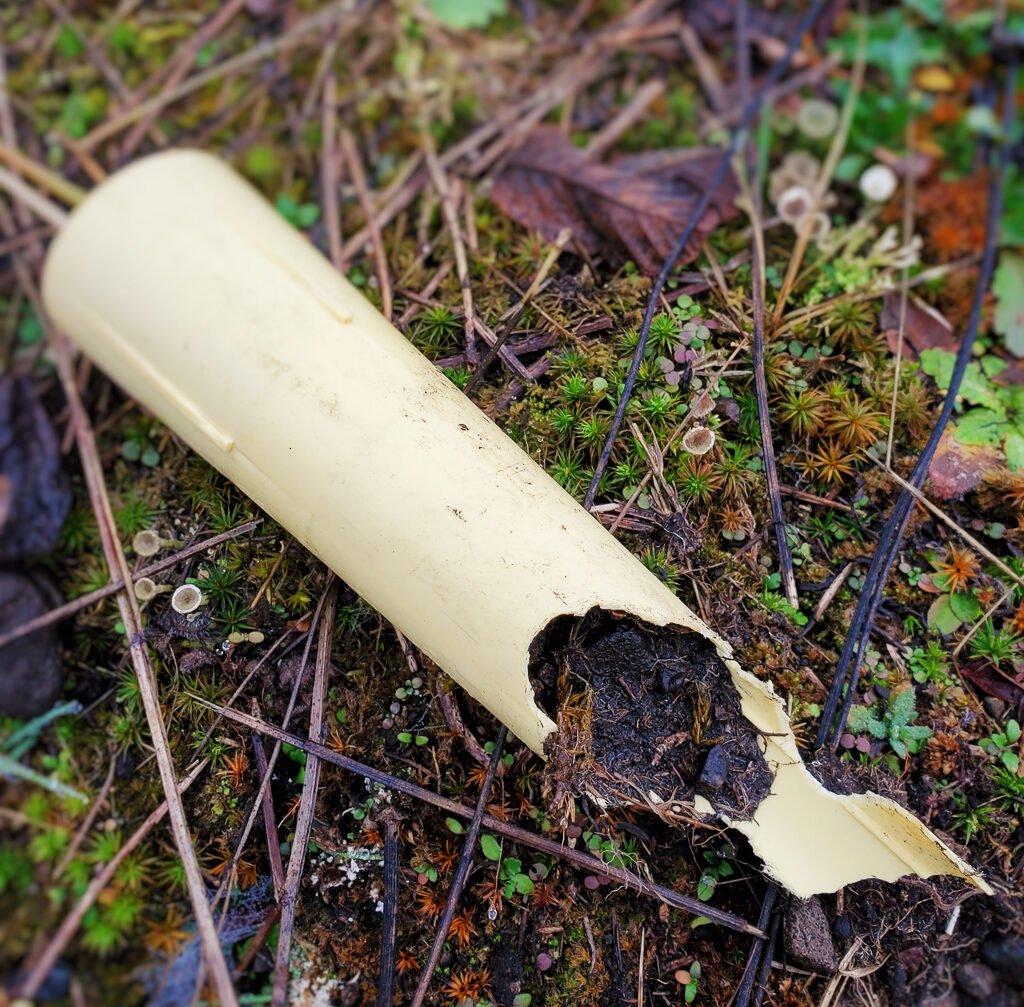 If we are all wise, we put buffers into our resolutions, both personal and for prairies. Add a few weeks of wiggle room for finishing some steps because the one thing you can rely on is unpredictability. And it’s all the better to finish early. If all goes well, then we wake up one morning with that savings account already at the set goal amount, or the four pack abs you were going for turns out to be a six pack. Can you get an eight pack, or is six the max? I’m a botanist, not a kinesiologist. Anyway, there is one special distinction that separates the personal resolution path from the prairie resolution path, and that’s the fact that us restoration workers will probably never give up even if we have a big set-back. That’s just not a viable option. We care too much and know there is so much at stake and the scope of effects reaches far beyond the area we can see or touch, probably even imagine. You don’t go into ecology work for the six-pack abs (why is that the example at the forefront of my mind??); aka- a single goal. We have an emotional commitment that most people would lack for mere resolutions. Sorry, but the prairie is bigger than your New Years’ resolution. It’s the special magnetism of such a complex interwoven world that also needs help and has so many interesting organisms in it. We’re suckers for the butterflies, the bees, and the balsamroots. That’s our rope bridge.

Here are some Prairie Resolutions I know we’re working on. 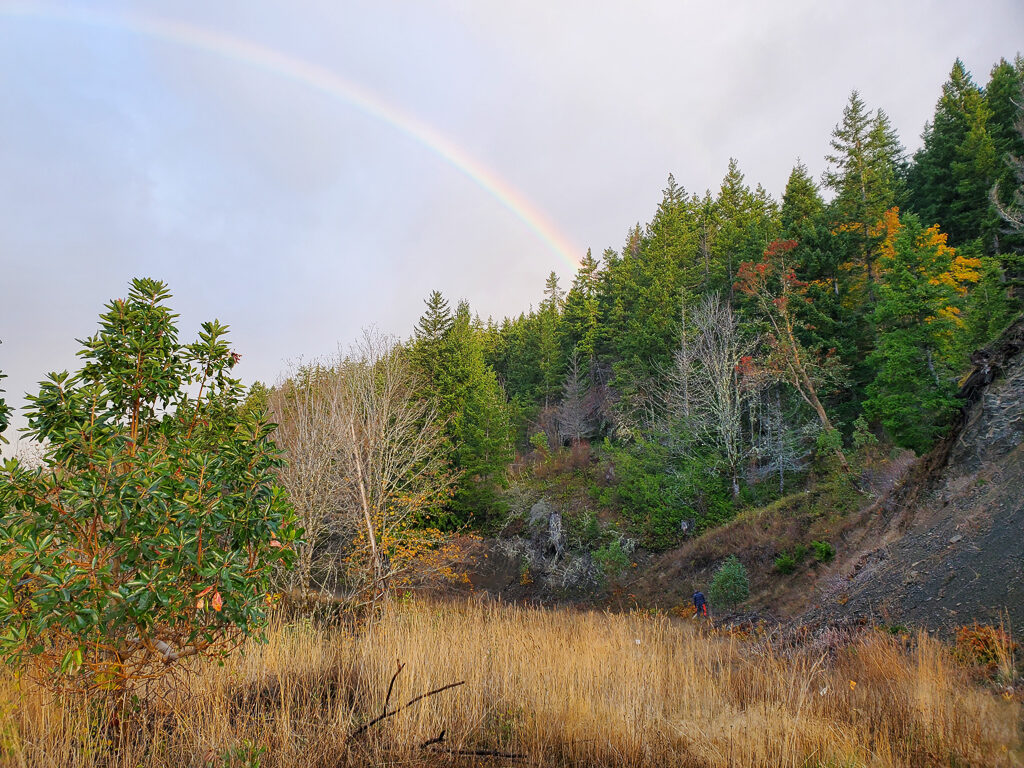 The boss working along Dan Kelly Ridge by Port Angeles, making room for more colonizing Taylors checkerspots, working under what would become a DOUBLE rainbow. Can you spot him? “Where’s Wal-ders” 😉 Photo by Ivy Clark.

I hope you feel more inspired to tackle any resolutions you may have, knowing that the prairies are working hard toward their goals with a whole lot of motivation. One last tip: try to think of all the other people your goal will be beneficial to like how widely beneficial prairies are. If you need to save up money for your children’s college fund (not just to reach a number for “future stuff”), then you are more likely to succeed. From us among the mounds, we’re ‘rooting for you’.