Fun in the Field – Memories of the Christmas Bird Count

Fun in the Field – Memories of the Christmas Bird Count, post by Mary O’Neil, photos as attributed.

Mary was born an Oregonian, but adopted Washington as her home state in her early 20’s. She lived most of her life in the Puget Sound/Seattle area relocating to Grays Harbor in 2005 when she retired from her career as a Ship Agent. After retirement she took a part time job with the Lake Quinault Lodge as an Interpretive Program Worker leading guided walks in the woods pointing out the birds, animals and plants of the Pacific Northwest Rainforest.

Mary was inspired to take up Bird Watching by her sisters, all 3 of which are avid Bird Watchers. She studied with the Rainier Chapter of Audubon of Washington and continues to expand her horizons with private study through Cornell University and its Ebird extension as well as Bird Canada’s study programs.

Mary has worked with Dan Varland of Coastal Raptors doing Beach Surveys for raptors like Peregrine Falcons and Bald Eagles. Prior to moving to Grays Harbor, she had assisted in the monthly Kent Ponds Survey which was conducted to prove to the City of Kent, Washington, that the little area surrounding these ponds was vital for the preservation of wild life, particularly birds and water fowl. It was there she enjoyed the very rare sighting of the Baikal Teal and rare to Western Washington Yellow Breasted Chat. Mary has worked with the Shorebird Festival over the last 15 years assisting in guiding various tours. Mary currently serves on the Board of the Grays Harbor Audubon Society. She is active in the Habitat Committee and is the current Field Trip Coordinator.

FUN in the FIELD

Memories of the Christmas Bird Count

The Christmas Bird Count got its start at the beginning of the last century, but I didn’t get involved until the beginning of the 21st Century. In the fall of 2001, I took a bird identification class through the Rainier Chapter of the Audubon Society (in South King County). Our teacher kept us involved with field trips and bird surveys over the next couple of months. She invited us to join her on the Christmas Bird count although she let us know this was very serious and not normally open to beginners. A number of us tagged along behind her as she methodically counted her territory – the DesMoines, Normandy Park area of South Seattle. I remember we took a break around 2 pm at her friend’s place off of S. 200th and DesMoines Memorial Drive. While some were sipping tea and relaxing, others of us walked a side street where we were very much entertained by a flock of drunken robins. It was fairly easy to count the robins as they would feed on the fermented berries until they would litterally fall out of the tree and flounder on the ground until their stupor wore off enough to return to the tree to continue feasting. The festive mood got a little intense when a Sharp-Shinned Hawk moved in to watch the drunken brawl as well. Our teacher was trying to get us to move along and was a bit reluctant to check out a bird I spotted which looked quite different to me. Finally at my insistence, she set her scope and zeroed in on the Townsend Warbler. It was my first, and she ended up being very delighted to add it to her CBC list. 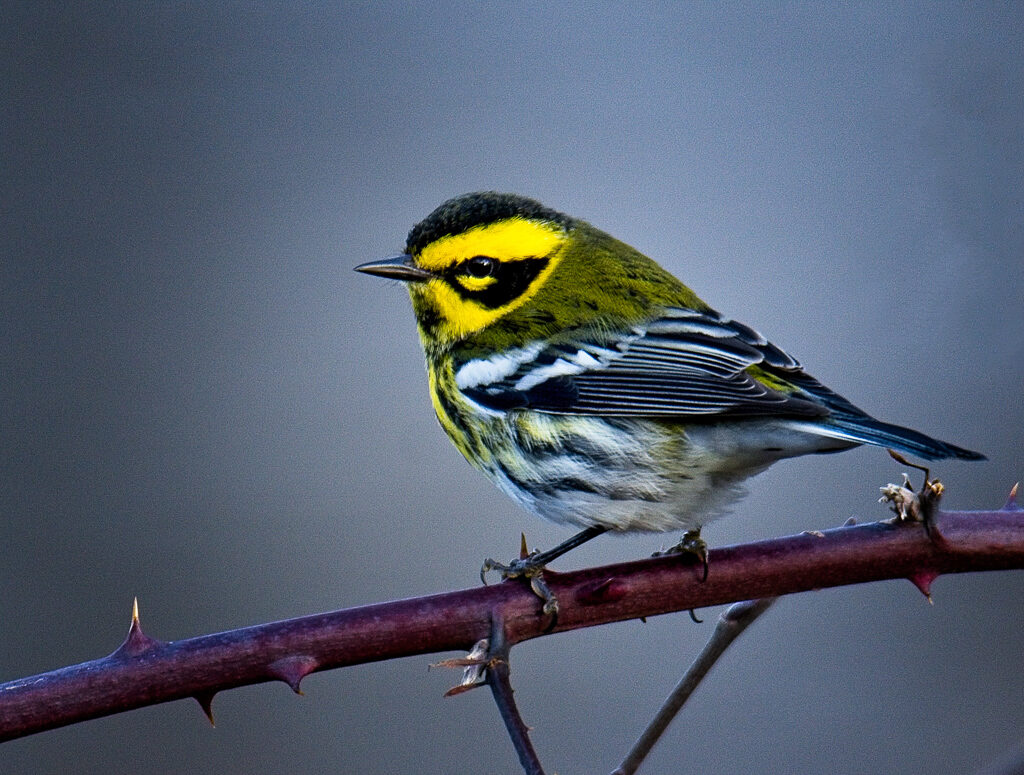 After moving to Grays Harbor, I eagerly signed up with the GHAS chapter of Audubon and have participated in their CBC ever since with minor exceptions. One year I helped with a group that covered the Westport area of the Grays Harbor Circle. We parked at roads end near the (now) Shop’n Kart Grocery. One in our group who was far more physically fit than myself and another older gentlemen offered to scout along the edge of the marshland. Meanwhile we were to check out the side streets and park area. It was a biting cold day and few birds were showing themselves. The older gentleman and myself settled in the van waiting for the third person to return. While in the van, I pointed out a distant leafless tree – Big Leaf Maple, perhaps. At the top I could see some birds flitting about. At the time, my optics were very poor and I could make out no details on these distant blips. I tried pointing them out the fellow with whom I was sharing the van. Once he caught sight of them, he said: Common Redpolls. I said, “No. We are too far away for you to be able to say what kind of birds those are.” “Common Redpolls” he said again. “You can tell by the way they are behaving.” Finally he sacrificed the security of the van to brave the icy weather. He set up his scope and, sure enough, Common Redpolls. This was my first and only time I have ever seen Common Redpolls. When the third person in our party returned, he was very cold but very excited about finding one of the rarest birds of that CBC, a Harris Sparrow. 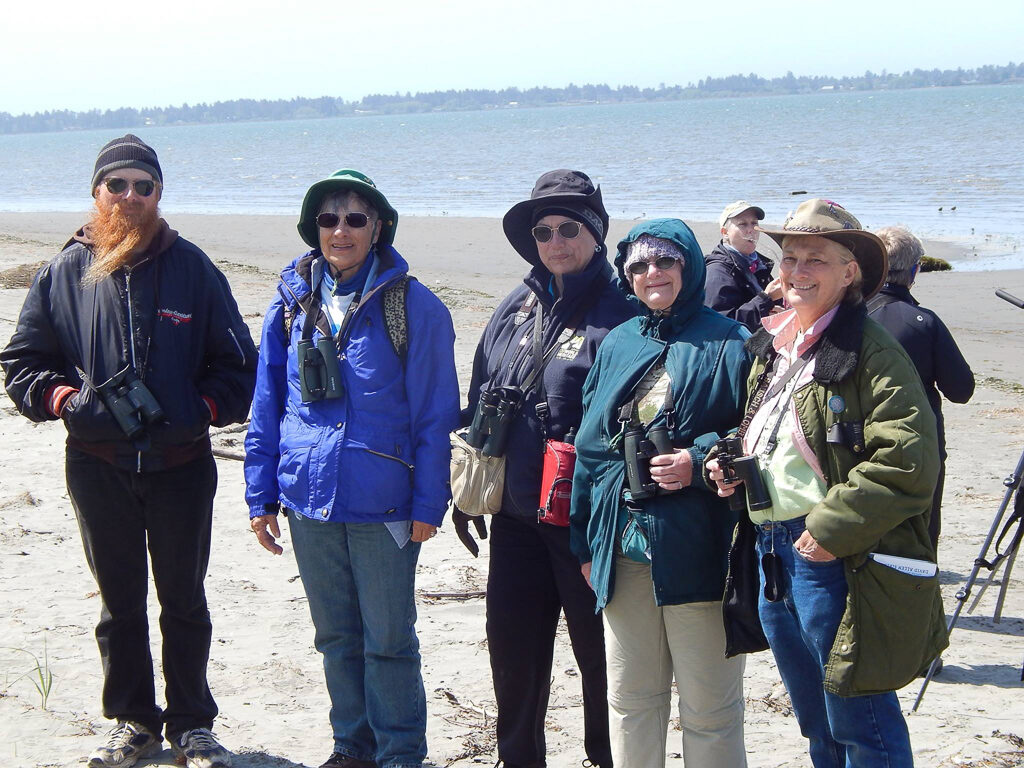 The rag-tag crew is me and my sisters and a nephew: l to r: Tanner Pinkal, Rita Schlageter, Mary O’Neil, Margaret Beitel and Cecilia Pinkal at Ocean Shores

I think the point I am trying to make is: Even if you do not consider yourself and Ace Birder, your ‘third eye’ is going to be a valuable contribution to the group effort. Beginner, Tag Along or Master Birder – it’s calling attention to that brief flick of motion that creates a scientific record dating back 120 years now. I’ll miss the compilation party this year but hope to make up for it in years to come.