I’d like to preface this post with the caveat that I have a personal interest in the outcome of this issue. I live on five acres a couple of miles south of the southern boundary of the proposed airport complex. We have put enormous amounts of labor and money into maintaining that five acres as prairie and turning it into extraordinary wildlife habitat. We have also put a lot of hours into restoration of the local prairies, such as Glacial Heritage, Mima Mounds and Scatter Creek. I do not want to see all that torn up and turned into another city.

There have been articles in The Daily Chronicle and The Olympian on the need for a second SeaTac size airport in Washington and the possibility of siting it in South Thurston County. The article in The Chronicle included a map indicating it’s location. I’ve approximated it’s boundaries on a couple of Google maps and indicated some features that I think relate to the environment in general and prairies in particular that would be affected by such an airport. 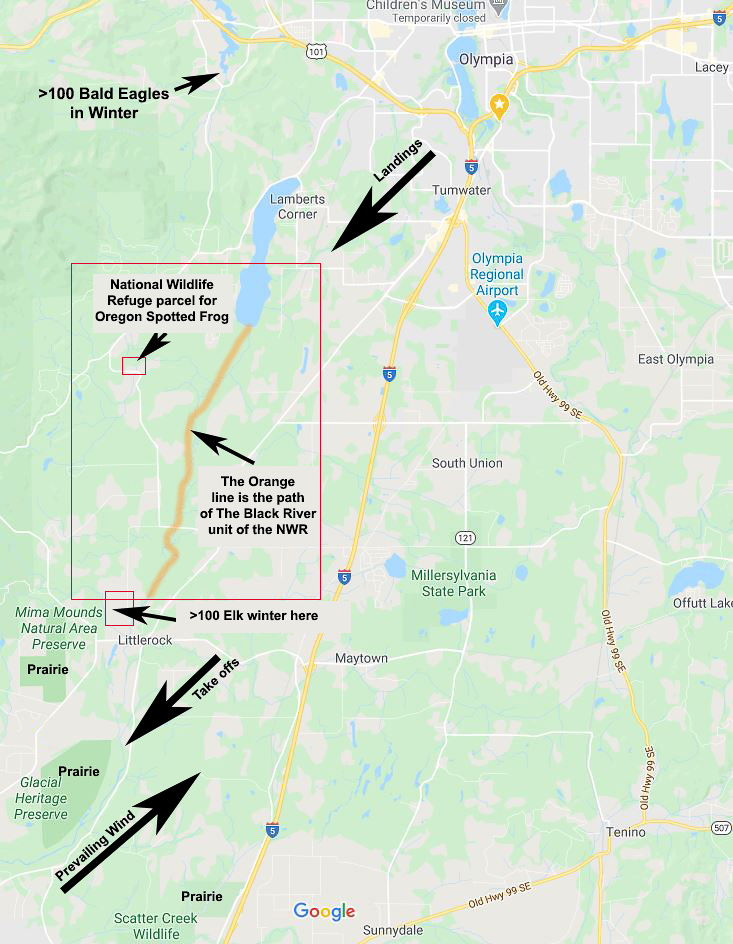 This map shows the specific environmental areas of concern of which I am aware within the immediate vicinity of the airport.

The estuary of McLane Creek hosts in excess of 100 Bald Eagles during the winter Chum run. Eagles and commercial aircraft do not get along well together.

The Black River Unit of the Billy Frank Jr. Nisqually National Wildlife Refuge runs from the south end of Black Lake along the Black river for the entire length of the proposed airport area as indicated in this map of the refuge. 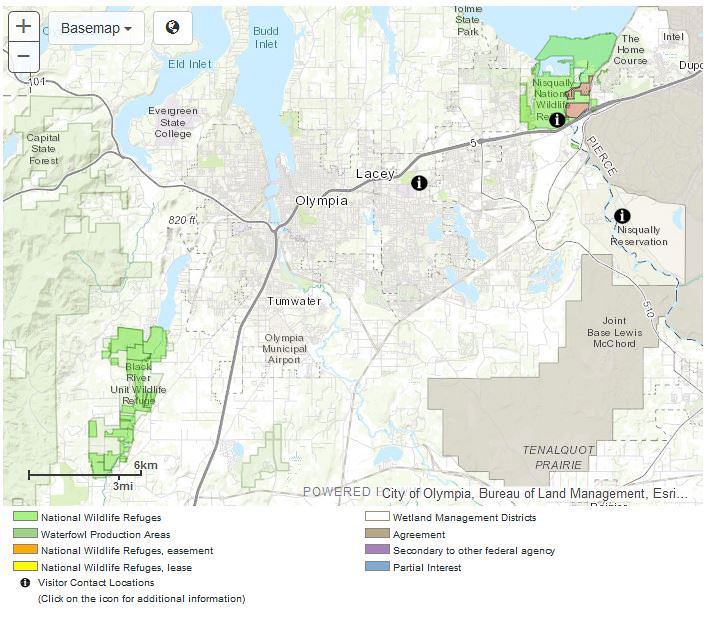 The Description of the Black River Unit according to the USFWS is:

The Unit is southwest of Olympia, Washington (see Map 4). The Black River is an important tributary of the Chehalis River, the second largest watershed in Washington State. The Unit boundary encompasses the northern portion of the Black River, the most intact lowland river system left in western Washington. The Unit consists of a large, complex mosaic of wetland, riparian, and some upland habitats surrounding the low-lying river. The Unit’s diverse habitats include river and tributary channels, bog, shrub swamp, riparian forest, emergent marsh, seasonally flooded nonnative grassland, dry nonnative grassland and mixed forest (see Map 5). Bog habitat is considered locally rare. Both the upper Black River and associated wetlands are some of the last remaining lowland wide floodplain systems in the Puget Sound Trough/Willamette Valley Ecoregion. The Unit contains spawning and rearing habitat and migration corridors for steelhead and cutthroat trout and Coho and Chinook salmon. At least 150 species of migratory birds, including waterfowl and neotropical songbirds, use the wetland and riparian habitats. The Olympic mud minnow, State-endemic and State species of concern, is found in the Unit. The Unit is one of only three sub-basins in Washington to support the federally threatened and Statelisted and endangered Oregon spotted frog. The complex system of wetlands within the Unit supports two major areas of frog activity, and drainages into the river support other frog activity areas. Management programs on the Unit are focused on protecting and enhancing the unique habitats for fish and wildlife, including rare or declining species, migratory birds, anadromous salmonids, amphibians, and other wildlife. Land areas within the Unit are closed to public access. The river bed is State-owned aquatic land managed by the Washington State Department of Natural Resources (WDNR). The river itself is open to the public by boat only, with boat access at one location on county land.

Not included in this description is that at the south end of the refuge, just north of Littlerock, the refuge hosts in excess of 100 elk (I’ve counted them) in the winter and they are occupying the area during the spring and summer in increasing numbers and appear to be coming into it earlier in the fall.

According to the prime contractor for the Seatac 3rd runway project, Icon Materials, the surface area of the runway and shoulders was 260,000 square yards. Therefore, three runways would cover 780,000 square yards. With taxiways, roads, parking areas, and buildings, the total impervious area would probably be in excess of 1,500,000 square yards. This cannot help but affect the hydrology of the Black River system no matter what kind of precautions are taken.

There are several preserves further south on the Black river, most of which is in one form of conservation or another all the way to the conjunction with the Chehalis.

Three of the premier prairie preserves in the South Puget Sound region lie within 5 miles south of the airport as well. Although they will theoretically not be directly impacted by the airport aside from noise and air pollution issues (note that airports still run during smog advisories and a large percentage of the fuel for a flight is burned in take-off and shortly thereafter), I believe that they would be impacted by the surrounding development that comes with a major airport.

The Port of Seattle’s Economic Impact Statement for 2017-2018 stated that there were 46.8 million passengers through Seatac in one year and over 87,000 direct employees. There were over 8,000 Hotel rooms in the area of the airport. These facts are cited because the greatest danger to the prairies in the South Sound is not the direct impact of a large airport, but the implications for development of South Thurston County. Most of this part of the county is zoned for agricultural use or 5 or 10 acre minimum residential parcels. These parcels provide some ability for exchange of genetic material and movement of species from one isolated prairie pocket to another. The building of a large airport would turn the surrounding area to commercial and industrial uses and the necessary transportation infrastructure to handle all those passengers and workers would further isolate various fragments of the remnant prairie ecosystem (see map below). The additional population pressure on the use of areas like Mima Mounds and Scatter Creek (and probably the glacial Heritage County Preserve) could not help but overburden the already strained ecosystems on those properties. The vast increase in impervious areas in south Thurston county would also inevitably impact the flows of the creeks and rivers that run through or adjacent to these properties. 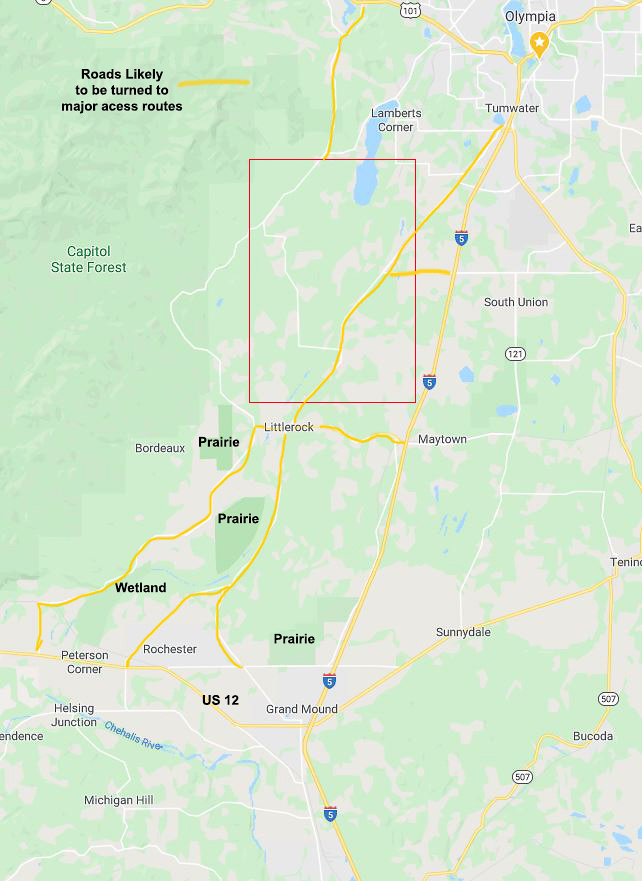 A larger Scale Map showing the proposed Airport location and the roads likely to require major widening and reworking projects and likely to support large traffic volumes. This assumes that existing roads would be used as starting points, rather than building all new roads. However, certain areas would require straightening to support higher speed traffic. Those areas are primarily near rivers.

Also, please take a look at the Black Hills Audubon Society article on this subject.

The most pertinent part of that article by Charlotte Persons is quoted here:

“At their meeting on June 22, the Thurston County Commissioners unanimously voted “no” to the early July deadline because of lack of information about the proposed airport. They may revisit it later if contacted by the State Commission.

However, the Port of Olympia Commissioners have not yet voted, and two of the three commissioners seem to be leaning toward a “yes” vote. At the suggestion of Port Commissioner E.J. Zita, they agreed at the June 18 Special Meeting not to vote until there are opportunities for citizen input at public meetings.

Please check the POO Commission website to weigh in on this important issue. Follow this link and click on Agendas to see when public meetings will be scheduled on this topic. However, the next regular meeting will be 5:30 p.m. Monday, July 13, and probably will be the next opportunity for your comments.

At the date of writing this article, during the Covid-19 shutdown, POO Commission meetings are on-line. Citizens must send written (emailed) testimony by 9:00 on the morning of a meeting and must sign up by the same time for live testimony. Please check to see if meetings are on-line on July 13–if not, protocol for public comments will change.”