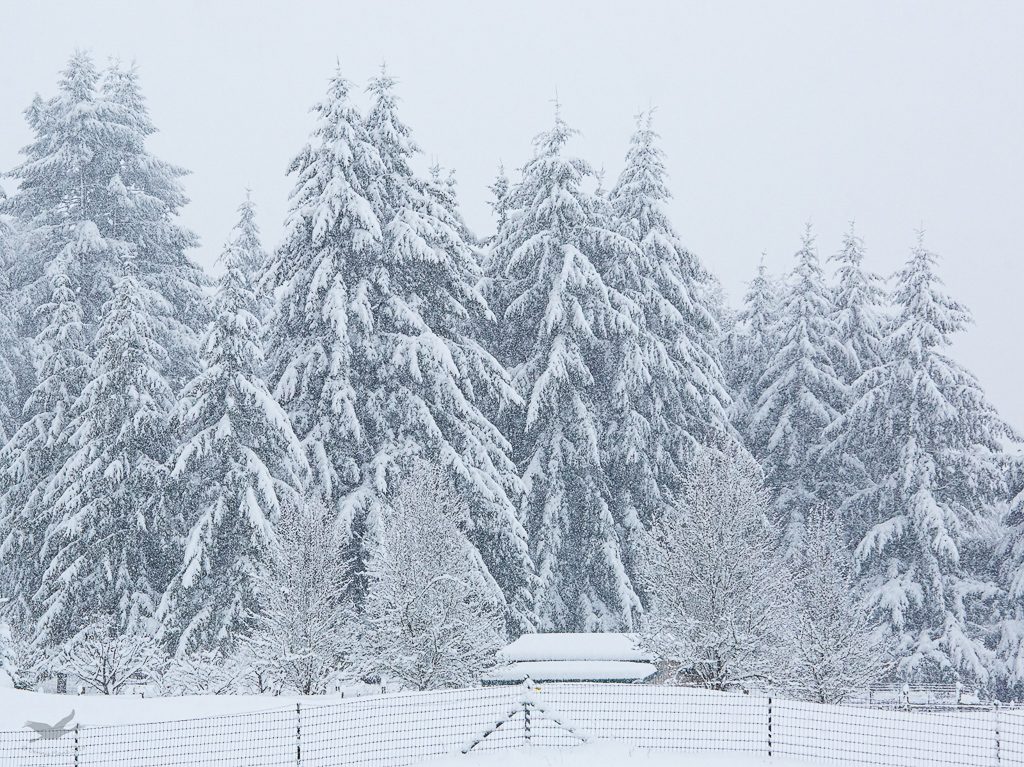 Not our favorite winter scene. Photo by Dennis Plank

Birders and bird photographers are fond of whining about the paucity of species to be found in the winter months, though luckily our winters rarely look like the picture above. When I started thinking about this post, I was predisposed to thinking I could count them on my fingers. Then I started listing them and before I knew it, I had a list of forty species that could be seen on our property. To verify my list, I asked my wife, Michelle, to compile her own list and then combined the two. That added nearly another ten.

While we are on prairie, we are bordered on the back by an old gravel pit that’s grown up to alders and a belt of youngish Douglas fir between it and our property line. We also have a small clump of Douglas Fir on the property, and I have a feeding station and my photography blind there. This obviously helps with the count. There are some species, such as the Varied Thrush that we only see when it snows. 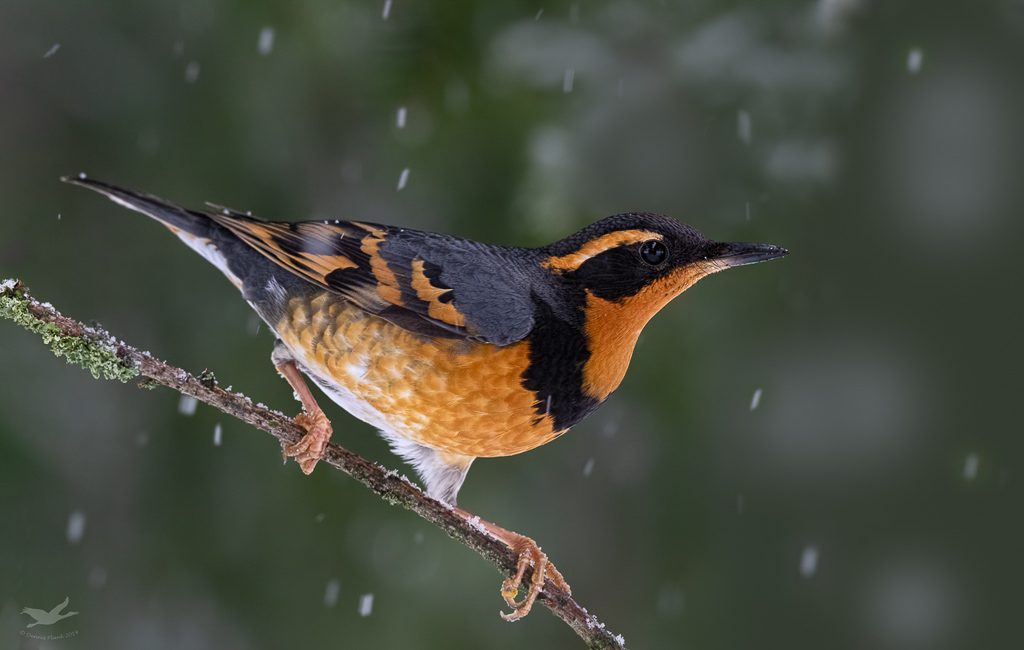 Others, such as most of the owl species, that we’ve identified only by their calls.

The most abundant species on our property is the Dark-eyed Junco and we have almost exclusively the Oregon race. 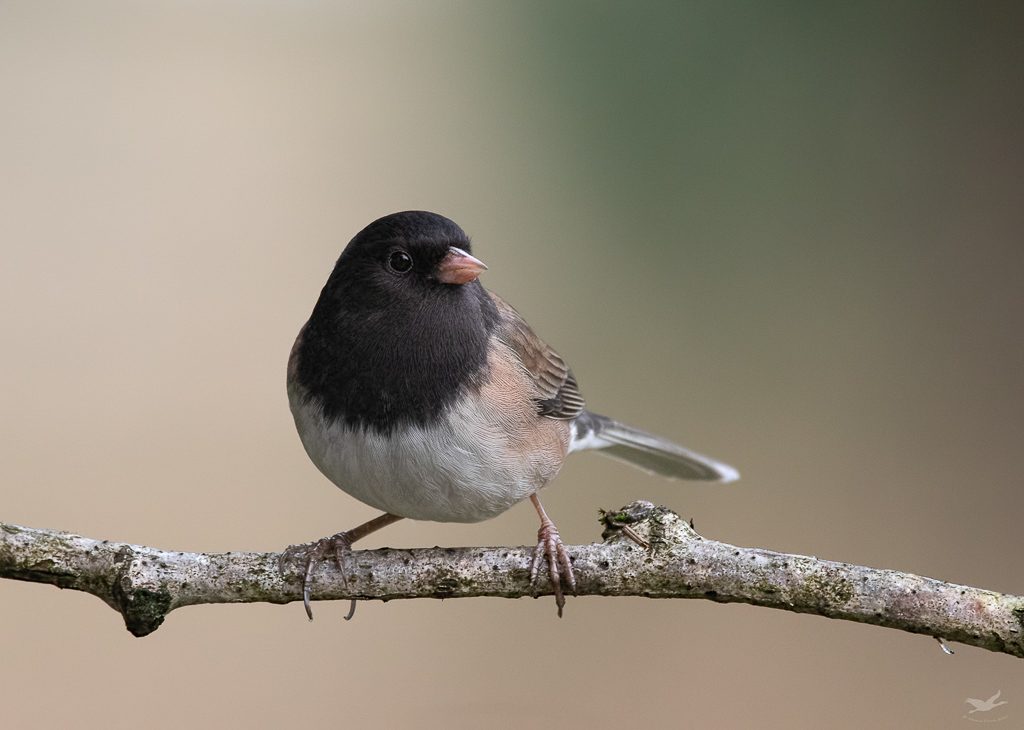 Dark-eyed Junco, Oregon Race. This is our common Junco in the northwest and is present year around on the prairies. Photo by Dennis Plank

However, last winter we had a stray from further east in the form of a Slate-colored variation. 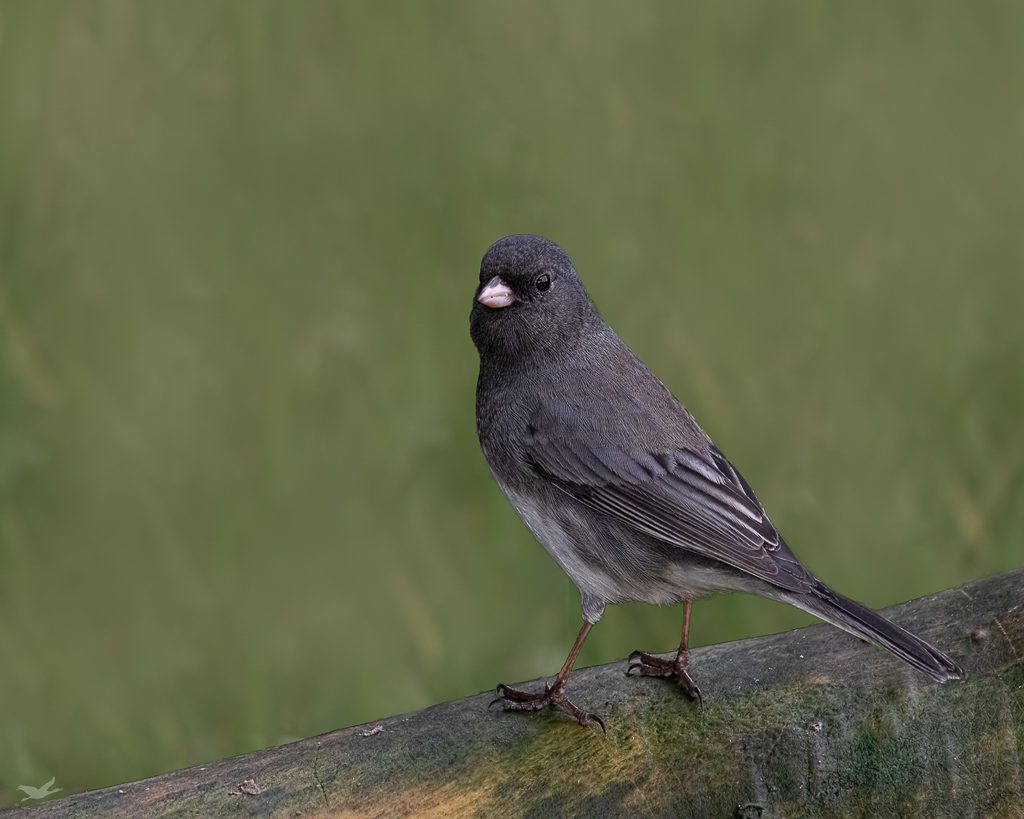 Dark-eyed Junco, Slate Colored Race. While the range maps show this area as part of their winter range, they list them as rare to uncommon and this one from last winter is the first I’ve seen. Photo by Dennis Plank

The second most abundant group is the Black-capped Chickadee and Chestnut-backed Chickadee, which are hard to separate, though they don’t really seem to hang with one another. The numbers and proportions of the two species vary quite a bit from winter to winter.

Chestnut-backed Chickadee (left) and Black-Capped (right). Both common feeder birds in the winter, though I haven’t seen the Chestnut-backed at my feeders yet this winter. They tend to summer in the mountains and move down, but we did have a pair nesting here this past summer. Photo by Dennis Plank

We have discovered an interesting phenomenon in bird psychology here. In the eastern part of the country, it is very common for people to feed Black-capped Chickadees from their hands. Here, we have never been able to get them to do more than a touch and go, though the Chestnut-backed Chickadees are quite willing. 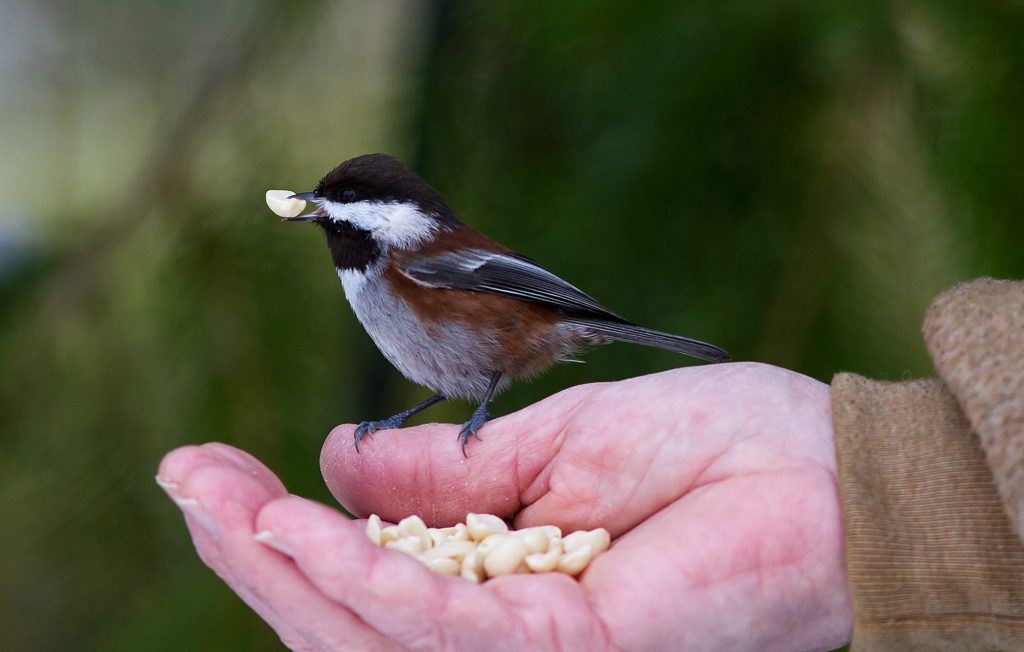 On rare occasions (it’s happened once in the 15 winters I’ve been here) we get a heavy influx of Red-breasted Nuthatches competing with the Chickadees. They’re not big sunflower seed consumers, but they do like the peanuts a lot. In the winter when they were so abundant, they got to the point where I would have more of them eating from my hand than I would the Chickadees, though most years it’s difficult or impossible to entice them. 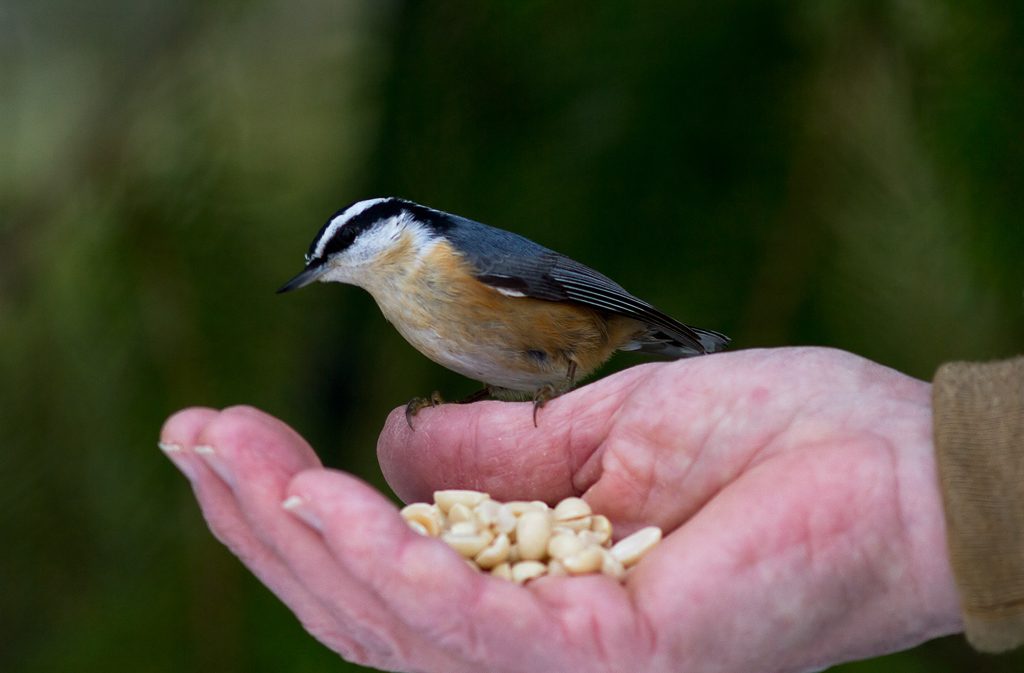 Red-breasted Nuthatch taking peanuts from hand. The same session as the Chickadee photo above. My hand using a remote shutter release. Photo by Dennis Plank

Away from feeding stations, the Chickadees tend to form mixed flocks with Bushtits and Kinglets foraging through the trees and shrubs, but neither of those species is attracted to feeders so seeing them is a very rare occurrence.

Another common set of feeder birds are the “red” finches. We regularly have Purple Finches and House Finches in the winter, with their relative populations again varying quite a bit. Some winters it seems like we have all one species. When I first started doing bird photography we also had Cassin’s Finches, but I haven’t seen one since 2016. They are typically not Western Washington birds, but the prairie tends to attract plants and animals more typical of the drier side of the state.

Feeding the birds can have it’s drawbacks for a bird photographer. The last few winters, I’ve had difficulty with our local deer population photobombing me. 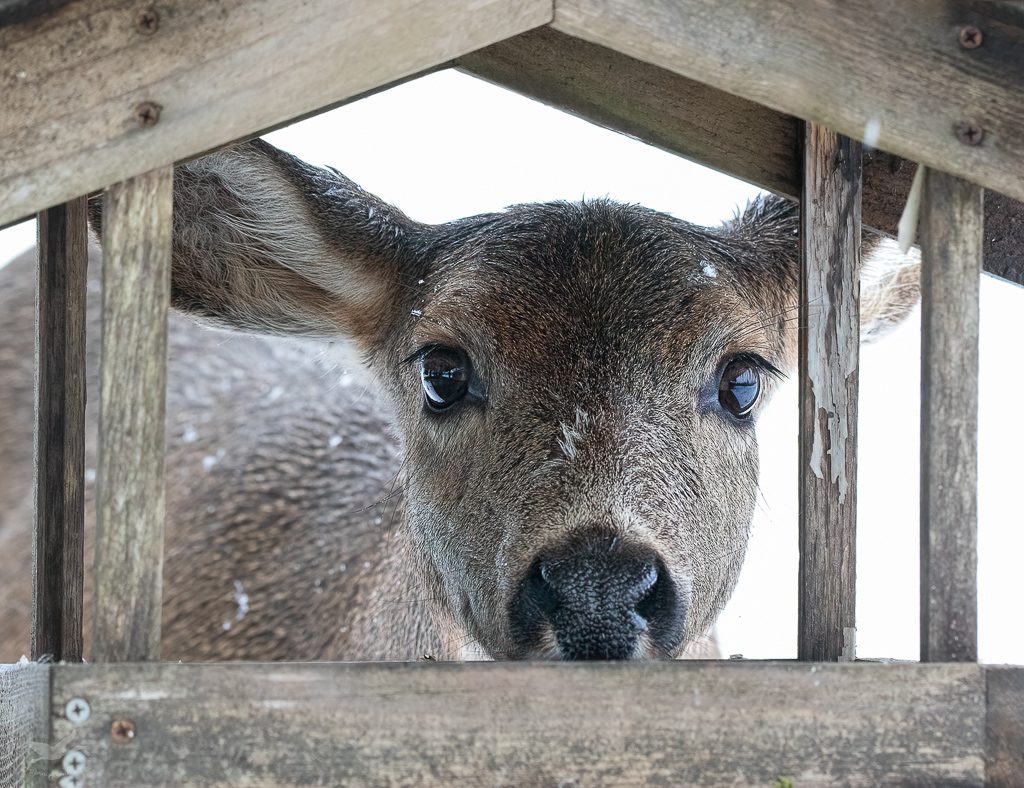 Photobombed by one of our local deer. Photo by Dennis Plank.

Another species with a surprisingly large presence on our property is the Western Bluebird, that comes through in flocks of up to a dozen birds once or twice a day and lets us know that they’d like us to put out some mealworms for them (see the Aiding the Bluebirds post my wife wrote). 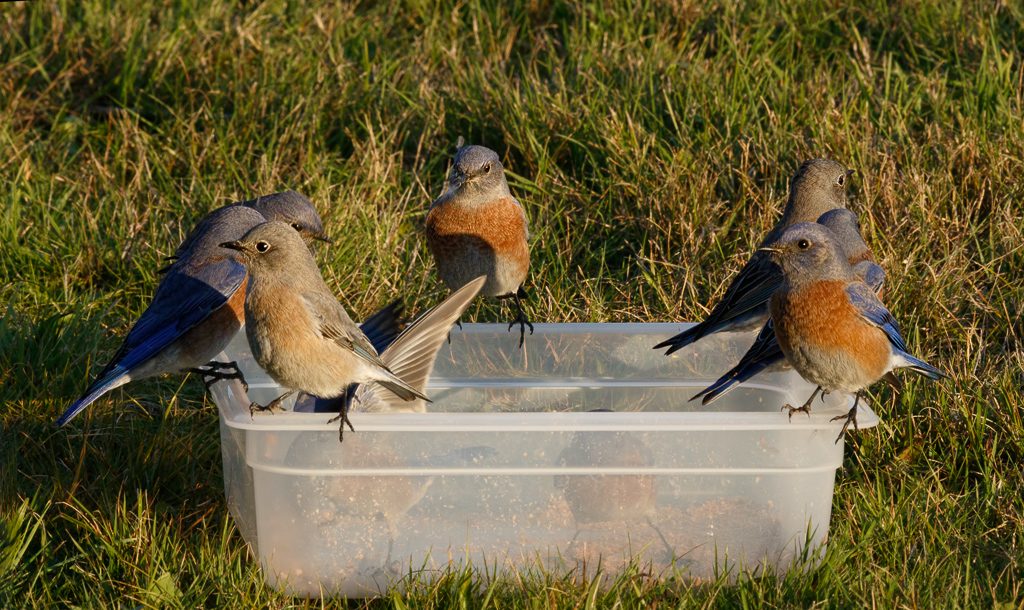 Winter Bluebirds at a snack of mealworms. Photo by Dennis Plank.

They are invariably accompanied by a few Yellow-rumped Warblers and a horde of Juncos. 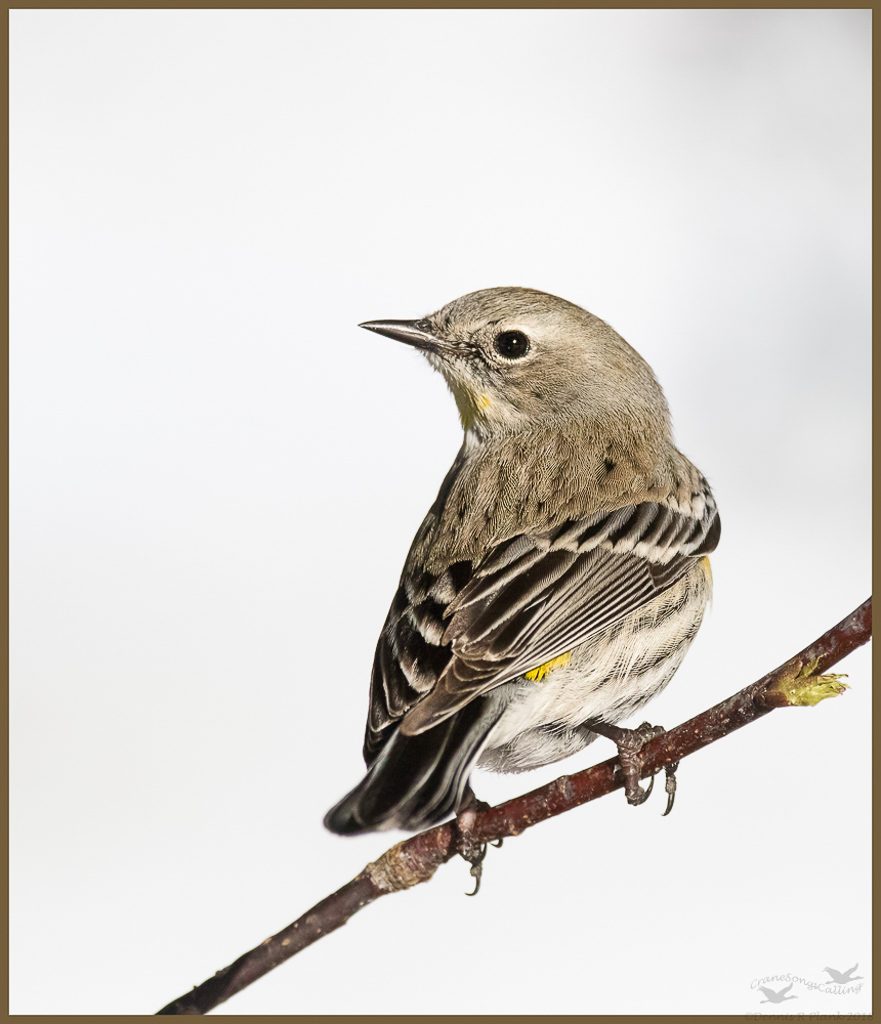 Yellow-rumped Warbler in winter from a few years ago. Photo by Dennis Plank.

This year, they have also been had an American Kestrel following them in. Thus far we haven’t seen it succeed in taking any birds, but I suspect it’s done so or it wouldn’t be so persistent. 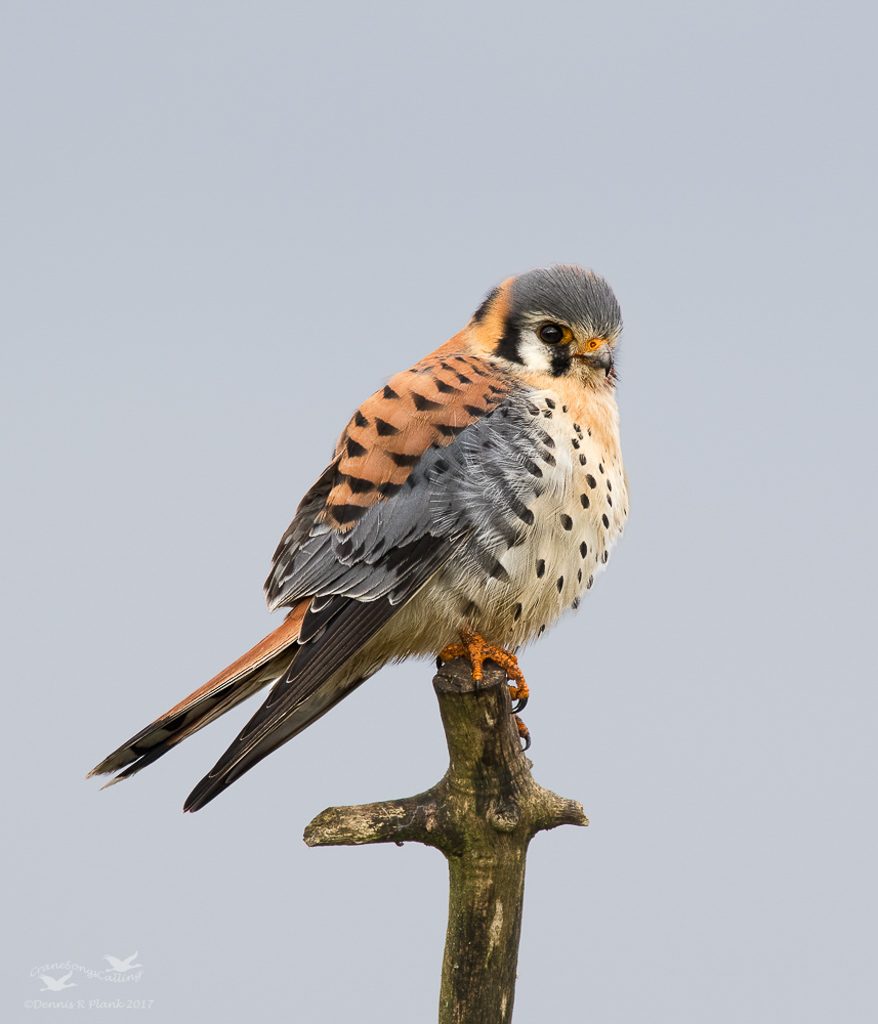 My Christmas present a few years ago was this beauty posing for me. Photo by Dennis Plank

The Kestrel is one of the iconic prairie birds of our area and seems to be on the increase. They’re a common sight on the wires along the road in prairie areas. I’ve been seeing one this winter along the Elk Refuge north of Littlerock where I’ve not seen one in the past.

Another iconic prairie species, that unfortunately does not pay us visits, is the Western Meadowlark. They can be found on prairies like Glacial Heritage in flocks at this time of year and on any half-way sunny day, if you’re out pulling Scotch broom like a good volunteer, you’ll hear the males singing. 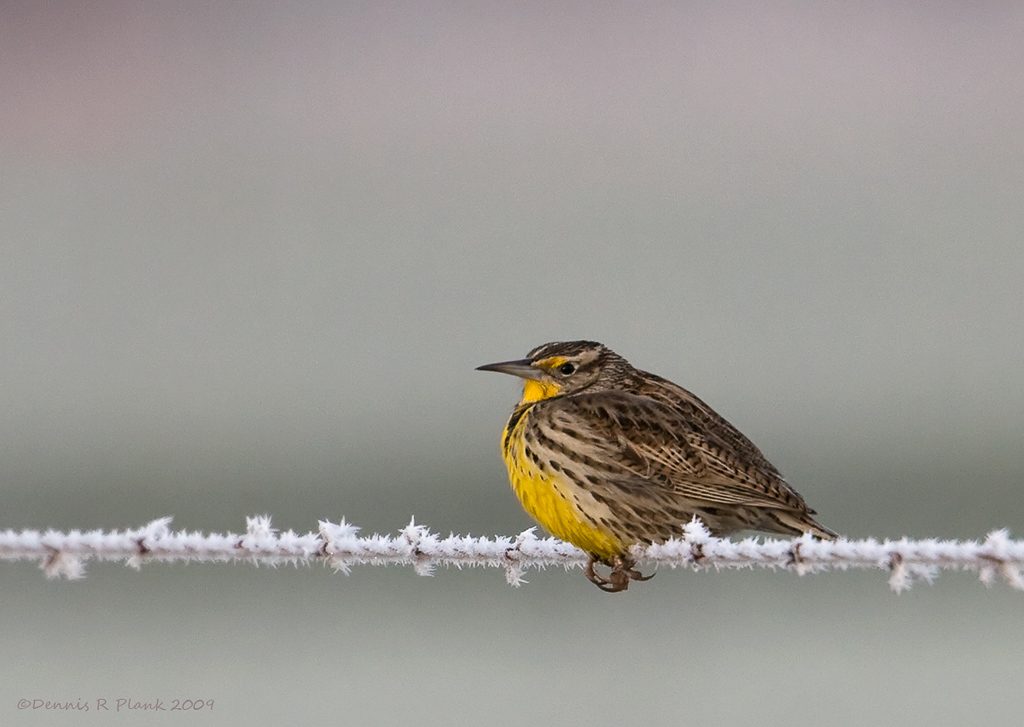 Western Meadowlark on frosted wire. I ran across this in my files. Taken on Glacial Heritage. Photo by Dennis Plank

A prairie species that I haven’t included on the list because we’ve only seen it on Glacial Heritage once and that on only one Saturday workday a number of years ago, is the Short-eared Owl. They look and hunt amazingly like a Northern Harrier and when we first saw them that day, we mistook them for Harriers.

Male Northern Harrier (left) and Short-eared Owl (right). The female harriers are brown instead of gray and the owls look a lot like them except for the absence of the white rump patch. The owl photo was taken in the Skagit Valley. Photos by Dennis Plank.

In the winter, our female harriers seem to leave the area, but we do sometimes see a male and some years they include out property on their regular hunting route. 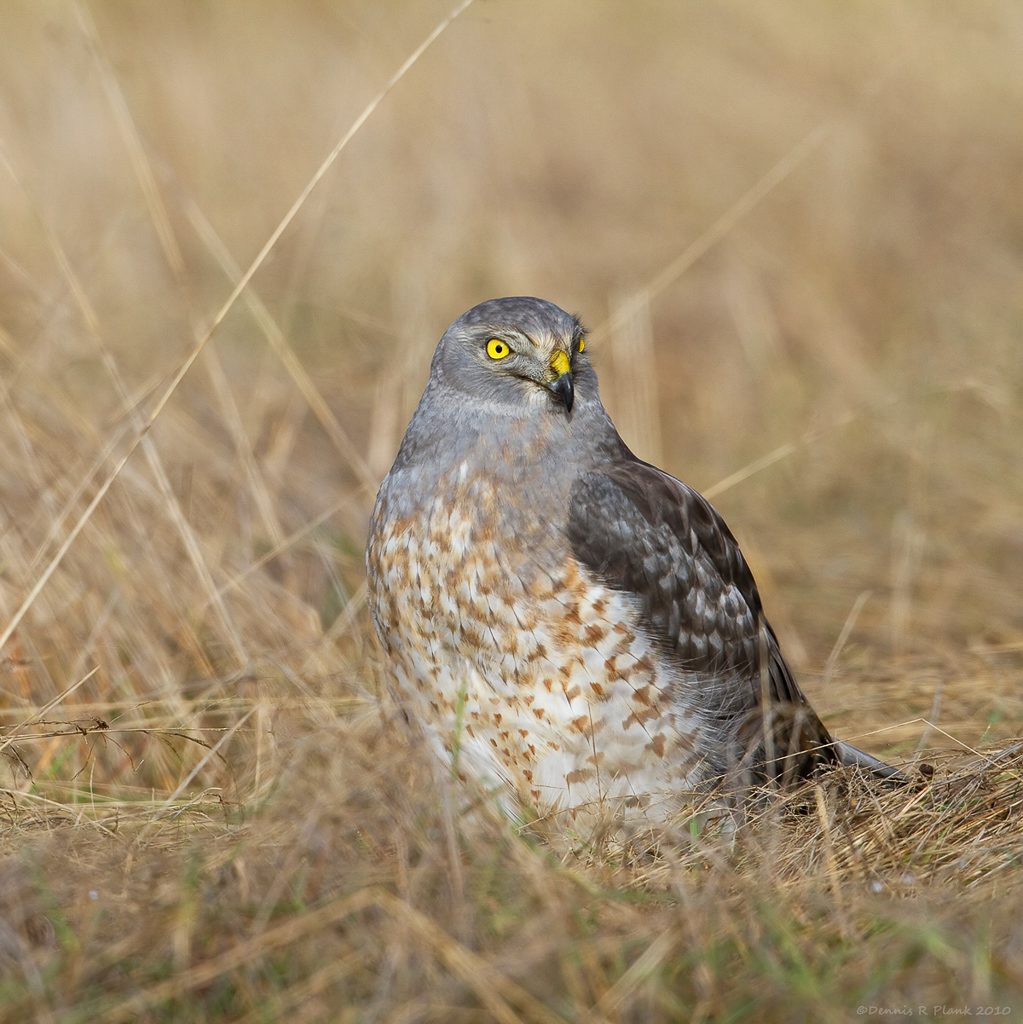 This Male Northern Harrier had taken a vole in our front yard and wasn’t about to fly despite me and my camera. Photo by Dennis Plank

Our list of winter birds is below. For simplicity, I just arranged them in alphabetical order by common name. If anyone has additions to this list, please leave a comment and we can augment it for later use. Please note that I’ve deliberately left off the water species other than Canada Goose since it spends so much time in open fields.