I’d like to go a bit into how the restoration team works at restoring the prairies. But first, a little background to chew on. The prairie ecosystem of the South Puget Sound and the greater Pacific North West, running from the Willamette Valley through Oregon to the south and up north into British Columbia, is a truly unique habitat. You may have heard of the grand vast prairie land of the Midwest, the Great Plains. Imagine the bison freely roaming through tall thick grasses that would brush the bellies of horses, surely carrying cowboys. Yet this is not the image you would see in our healthy PNW prairie. Actually the sight line is much better, and dare I say more interesting. Perhaps a biased opinion, since I work on these prairies, a transplant from a truly cowboy-littered southern state. But a key difference here is height. The native grasses of the PNW prairie are much shorter than those of the Great Plains. Hence, you can see even more. More hints of the little vole tunnels persistently nudged daily through the foliage, more unique puffy crunchy lichens, more elk antlers and many of the tiniest most adorably interesting mini plants you may ever see. 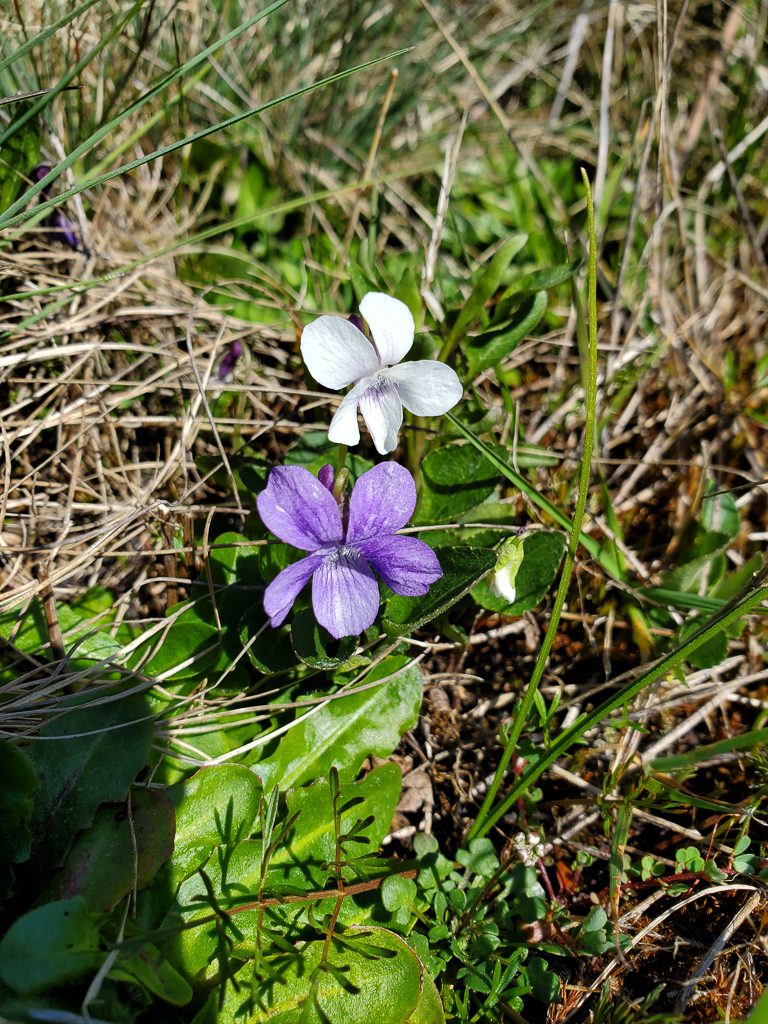 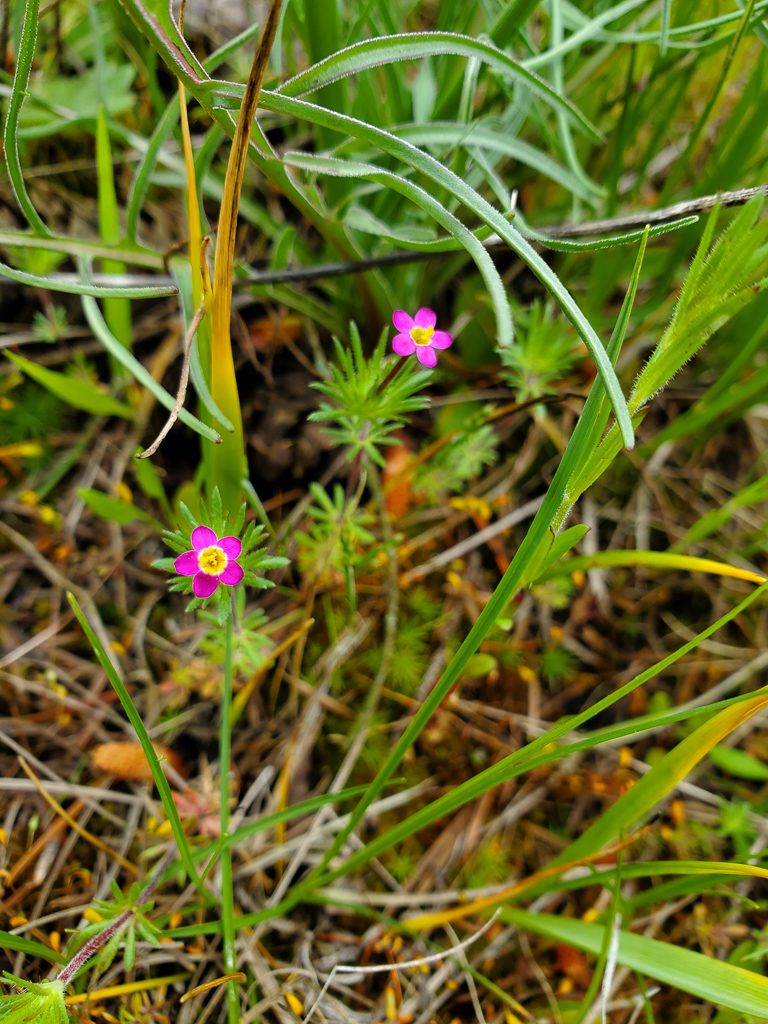 Every step can be distracting because there is some new small beautiful thing just about to be underfoot. “Tread softly, for you tread on my dreams.” I have been lucky to help restore these short grass prairies, and see them slowly transform from degraded, non-diverse, and even simply junk fields of weeds, into vibrant, healthy oases of rolling color among short puffs of wispy green Fescue grass. 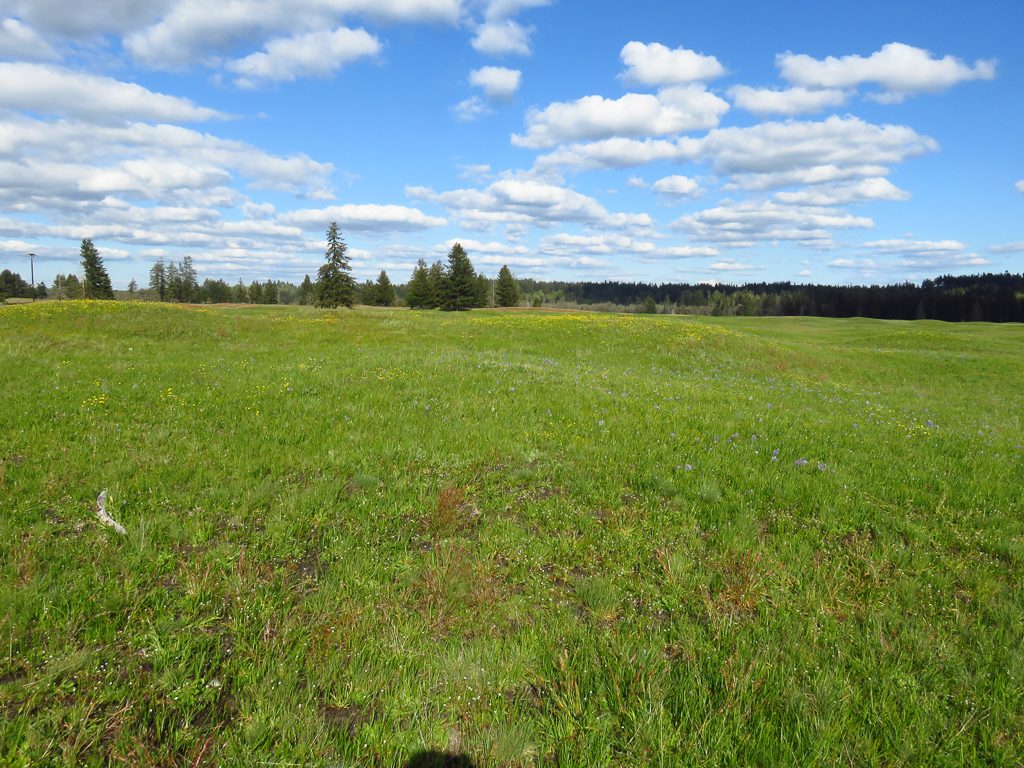 So many paths are cycles, and the path of the prairies starts with fire. That so scary thing some learned to fear, and then taught others to fear it until nearly everyone did. It turns out the more we fear fire, the more we keep it away and then the more dangerous it becomes. Like stress. The more you suppress it, the more it will rage and destroy once it finally escapes. Fire has always been part of the prairie life cycle. Lots of little fire, more gently smoldering and sweeping away the taller woody species and those less tolerant of drought, like shrubs and the coniferous Douglas firs. The tall slow growing Garry oak can handle both drought and fire, so it stands scattered in clumps in oak-prairie woodlands or following rivers as a ribbon of forest dividing prairies. 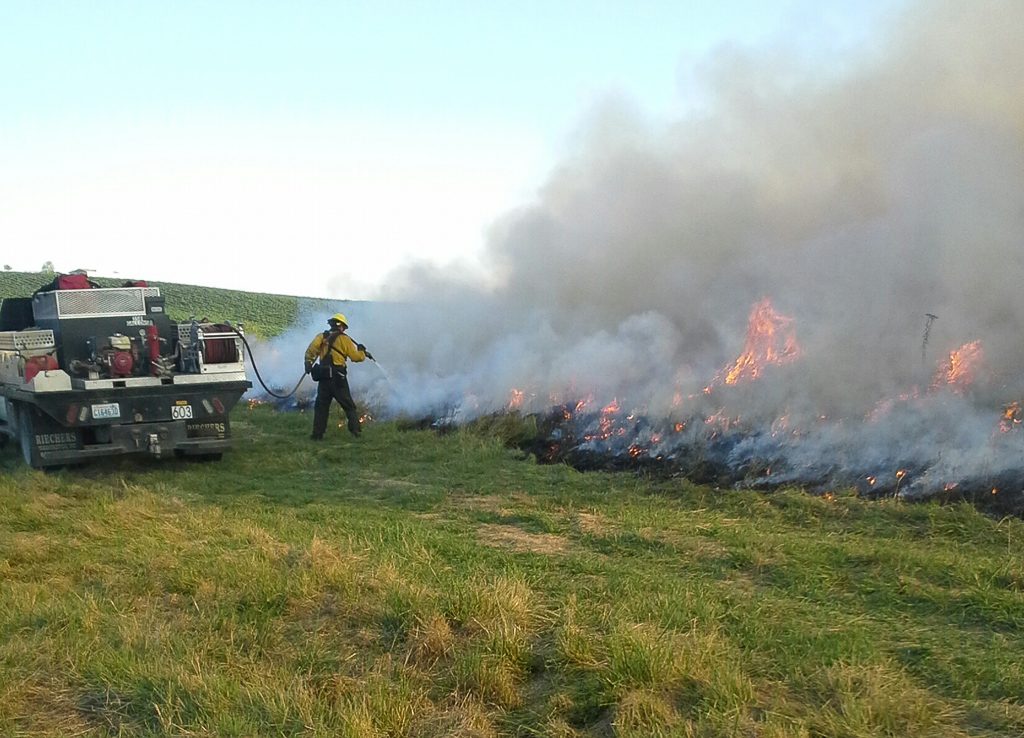 FF2 firefighter & engine suppressing flames along the fire line on one edge of unit on Oregon burn, creating “black” border around fire to burn as it burns safely interior. Photo by Ivy Clark

Despite our fears of fires, and the great damage they do in certain areas for a variety of reasons, we regularly light the prairies of the PNW, safely with great care and lots of water on hand (or our back). Because it starts the cycle of healing that they need to stay diverse and functional, to house the butterflies and birds and elk and gorgeous flowers and oaks with their branches meandering in the sky. 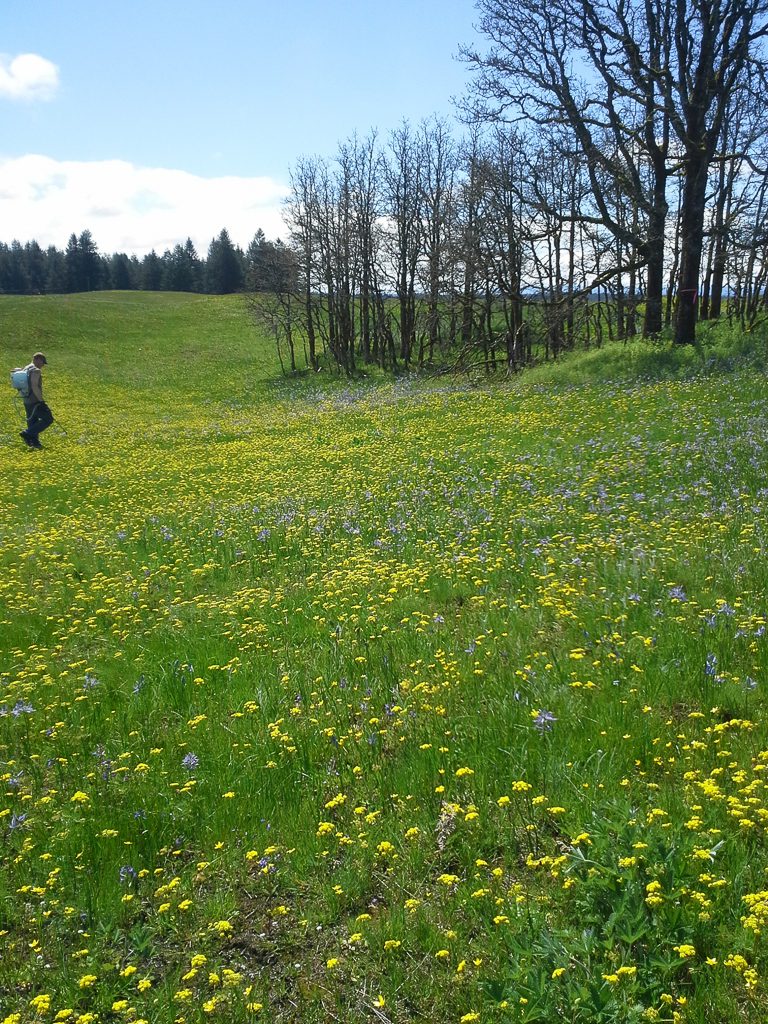 But of course, you can’t just light a huge old nine foot tall solid broom field, reclaimed from abandoned ranch land or homestead. Scotch broom burns hot and fast and dangerous. And that is often how we find sites to restore that were long ago prairie, and long since been so. If it isn’t infested with invasive Scotch broom, then it is likely mostly invasive grasses, which also grow too big to just light on fire safely. So fire is the first step in the life cycle, but not necessarily the first step in restoring a prairie to life. Often we have to start by mowing the area, sometimes through broom taller than the tractor, or broadly spraying herbicide when there is little to no native plants left. Then we can start reestablishing the native short bunch grasses (Festuca roameri, Danthonia spicata, Koeleria macrantha, etc.) that will burn slower and less hot, and less dangerously than all the non-native invaders. Then we burn. And what a cycle of life that starts! 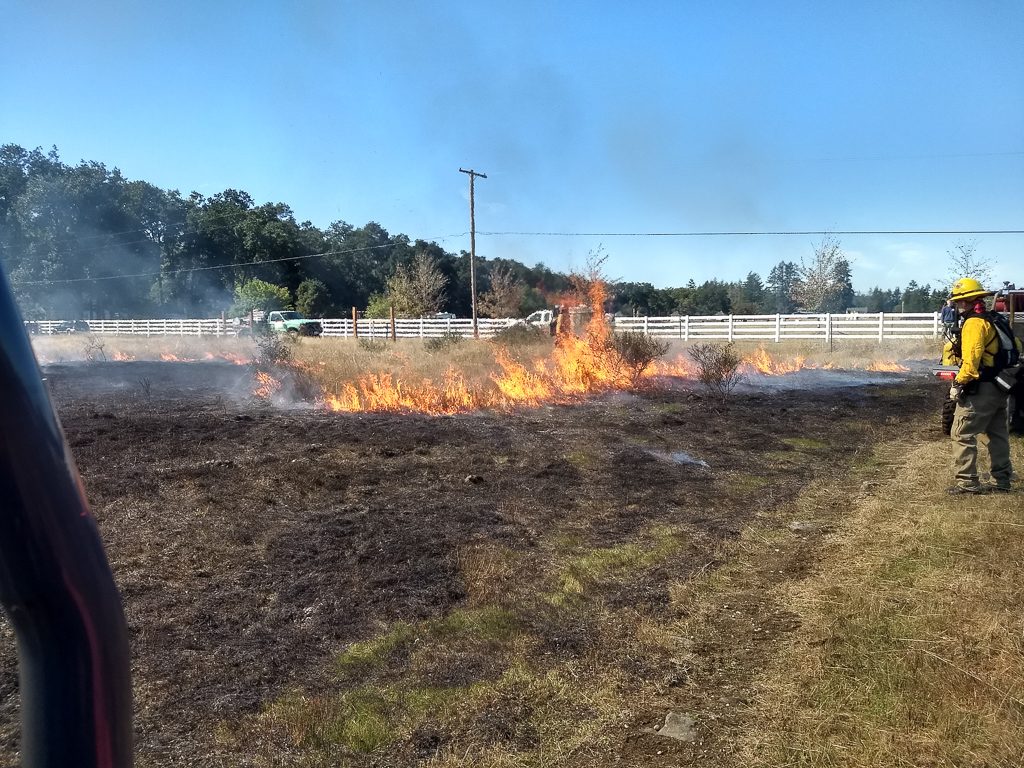 After a burn the prairie isn’t dead or as barren as it may look. The camas bulbs that were barely surviving through years of smothering by weeds are there underground waiting. So are a few native seeds. But before they can pierce through the soil, the weeds that are so good at growing where they don’t belong get a head start. That’s why they are so good at taking over. But that is their downfall during restoration. They get sprayed with specific selective herbicide, so that only the weeds die, giving the native plants more growing and seeding room. Now they have a fighting chance. For a second blow against the weeds, we cast a diverse mix of new seeds, reintroducing species long lost from that site and adding to the numbers of those that clung to life. 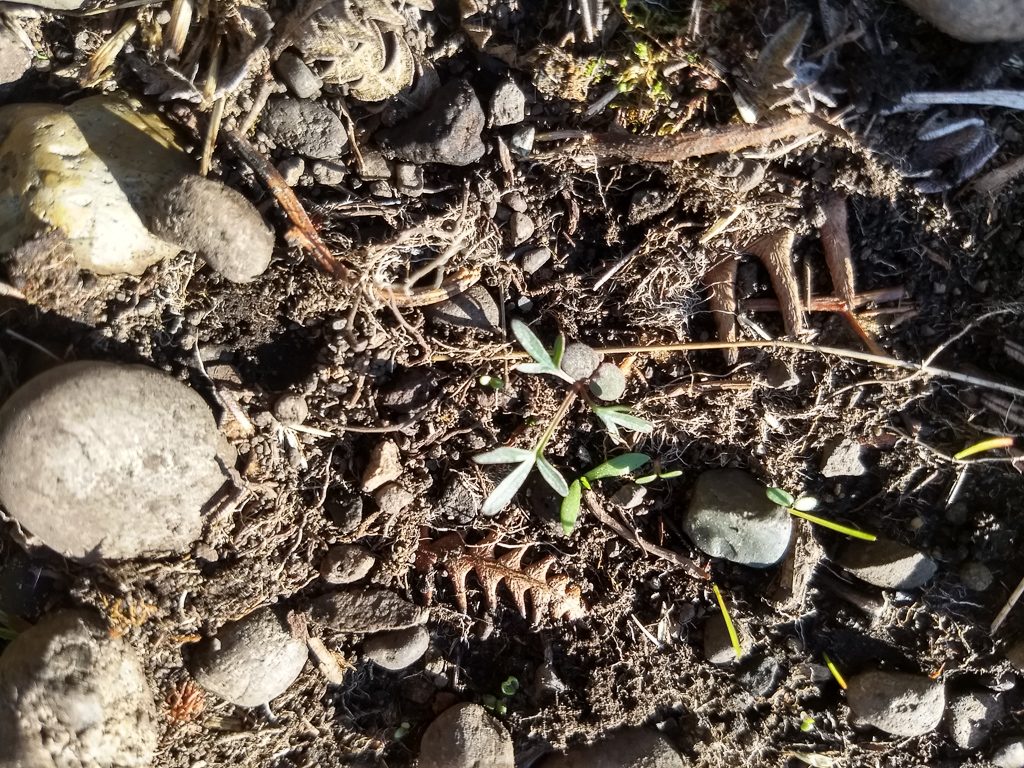 Prairie plants, like their habitat, are amazingly hardy. Within a few years of active restoration work, a prairie can go from an area you’d tell your kids to stay out of to an oasis of color and bird song, where even the parents want to play. Just don’t pick the flowers okay? They are still getting their seed bank established and need to make as many seeds as they can because the weeds are still lurking nearby. Unless you see some blooming Scotch broom we missed. Help us out and take that home with you as a trophy of prairie restoration. After all, there is only about 3% of the short grass PNW prairie ecosystem left. That’s 97% of an entire ecosystem, unlike any other in the world, gone. Or is it 97% waiting to be restored? Well minus the percent with homes, and active farms, and ranches, and businesses. Still, there’s more work we can do and we look forward to bringing this interesting, valuable and all around attractive ecosystem back, one step at a time, treading softly.