I am really enjoying doing this blog. Over the last twenty odd years of volunteering on our local prairies, I thought I’d learned something about the succession of the plant species as the seasons progressed, and indeed, I do have some vague idea of early and late bloomers, and an intimate knowledge of when the worst weeds bloom! However, the exercise of going out almost daily to look for new arrivals and documenting them with photographs, has already shown how vague that knowledge has been.

I’ve been looking for Prairie Violets (Viola adunca) for three weeks now and Friday afternoon (April 10th), there they were. And it wasn’t just a couple. There were clumps with three or four or more blooms and several clumps on every mound on our property and even in the “orchard”. I’m sure there are many more that will make their appearance over the next few days, but I was astounded by their sudden appearance. 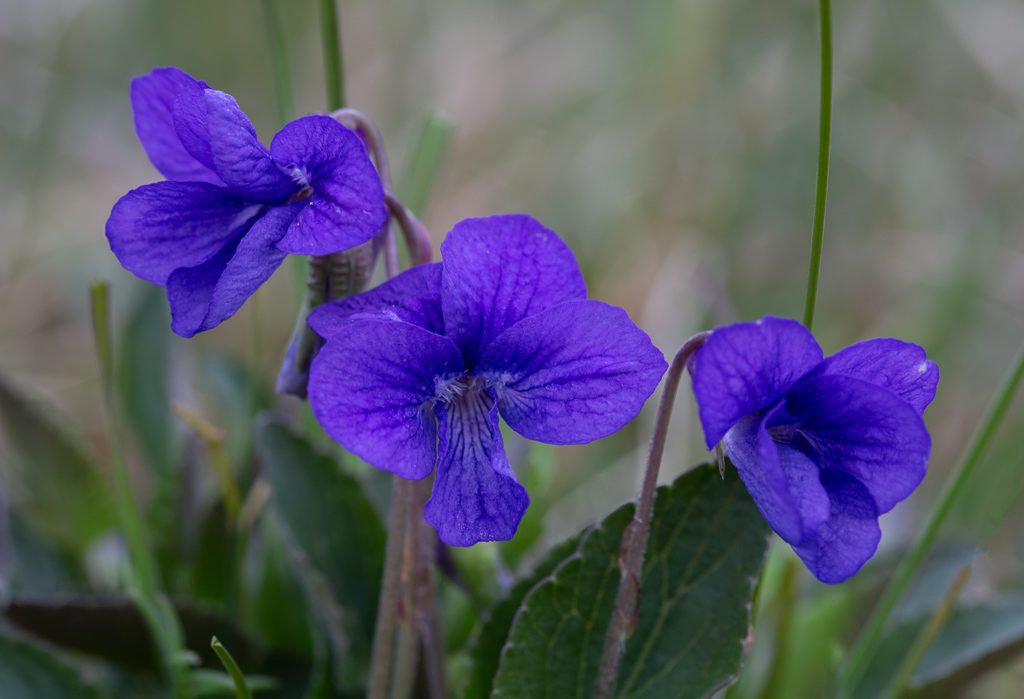 A trio of violets in prime condition 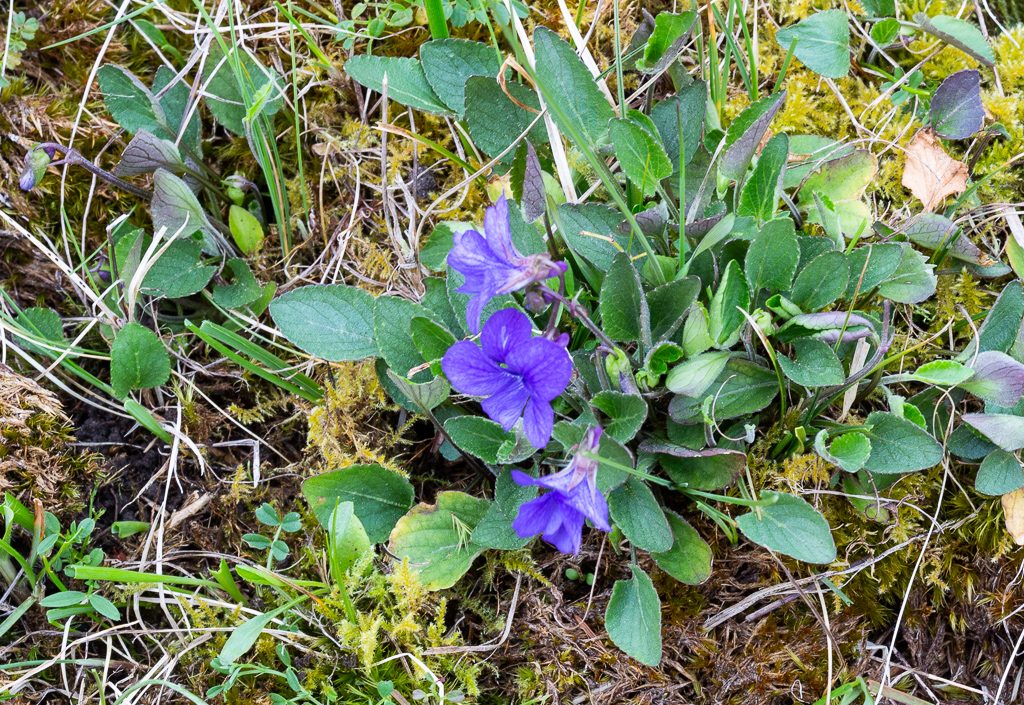 The entire plant showing the leaves 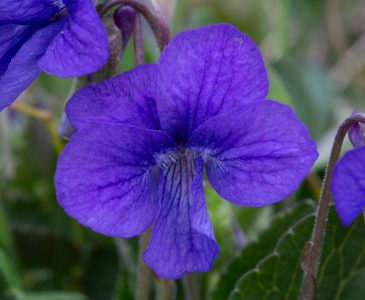 A detailed look at the center flower

The title of this post is a bit of a play on words. These while the flowers are on them and as the seeds are maturing, the flower stem forms a graceful goose-neck arc, but just before the seeds are rip, it straightens out to raise the seed heads as far as possible and then the seed pod bursts open and the seeds are expelled almost explosively. This has been very frustrating for the wild seed collection volunteers. They actually put a fine mesh snood over the blossoms to try to collect the seeds because when they’re ripe the slightest touch can make the seed head pop. 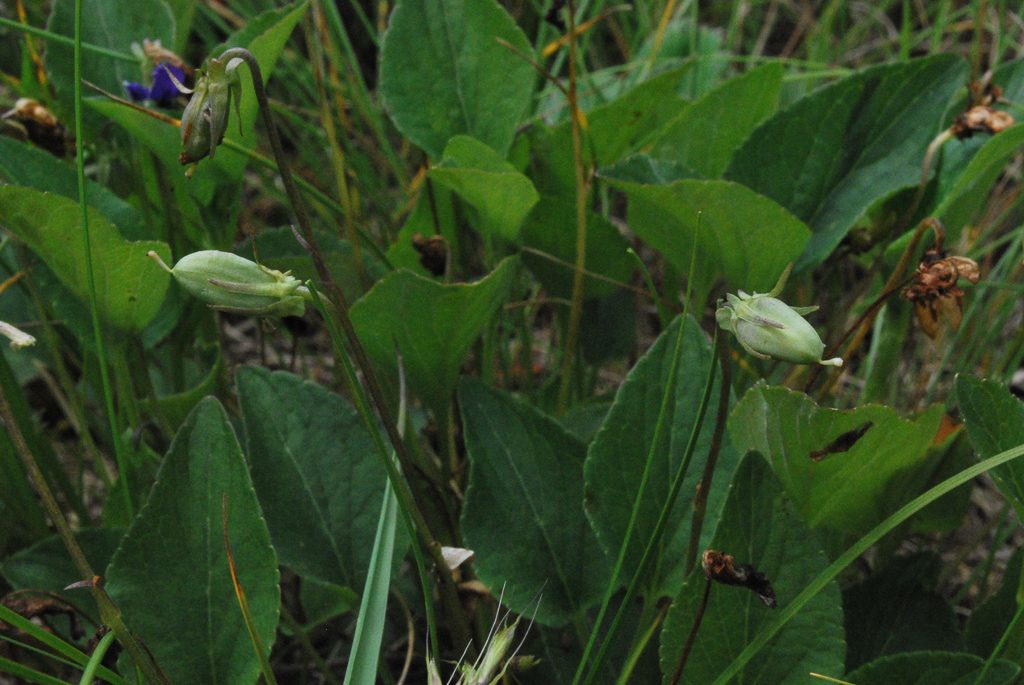 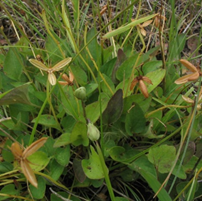 Another cool thing about these violets is that they keep blooming and setting seed as long as they can keep getting some moisture. We regularly find them in bloom during the fall planting season in November.

I am also finding it enjoyable to integrate the various flowers bloom cycles with one another and even with the arrival of our prairie birds. So now, I’m aware that the blooming of the first violets coincides with the peak of the Shooting Star bloom and a week after the first Balsamroot starts poking its nose out of the ground. 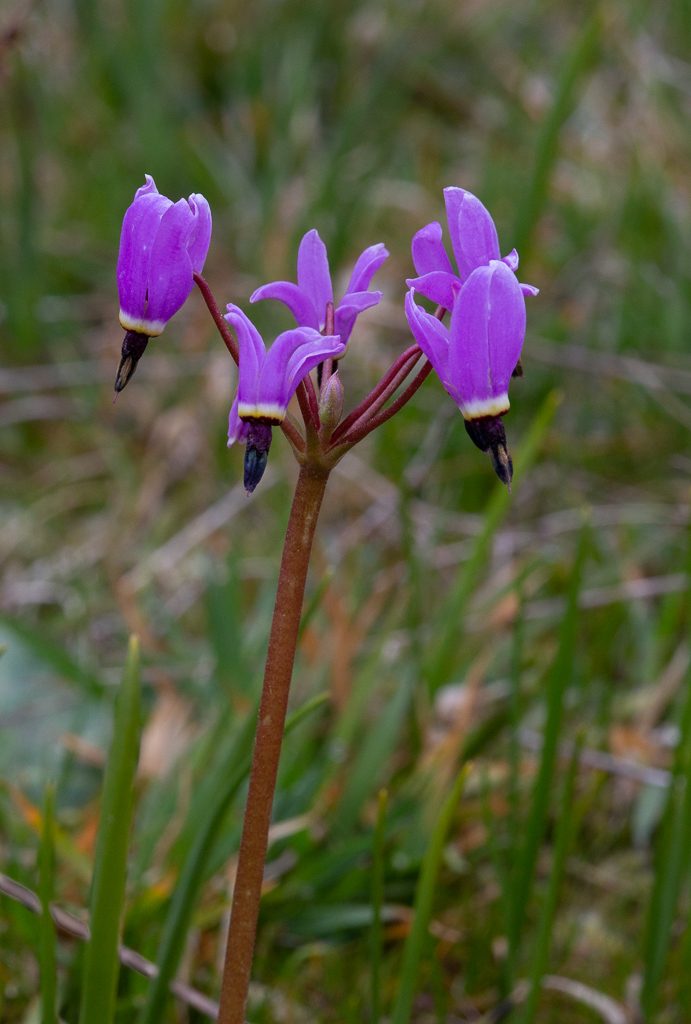 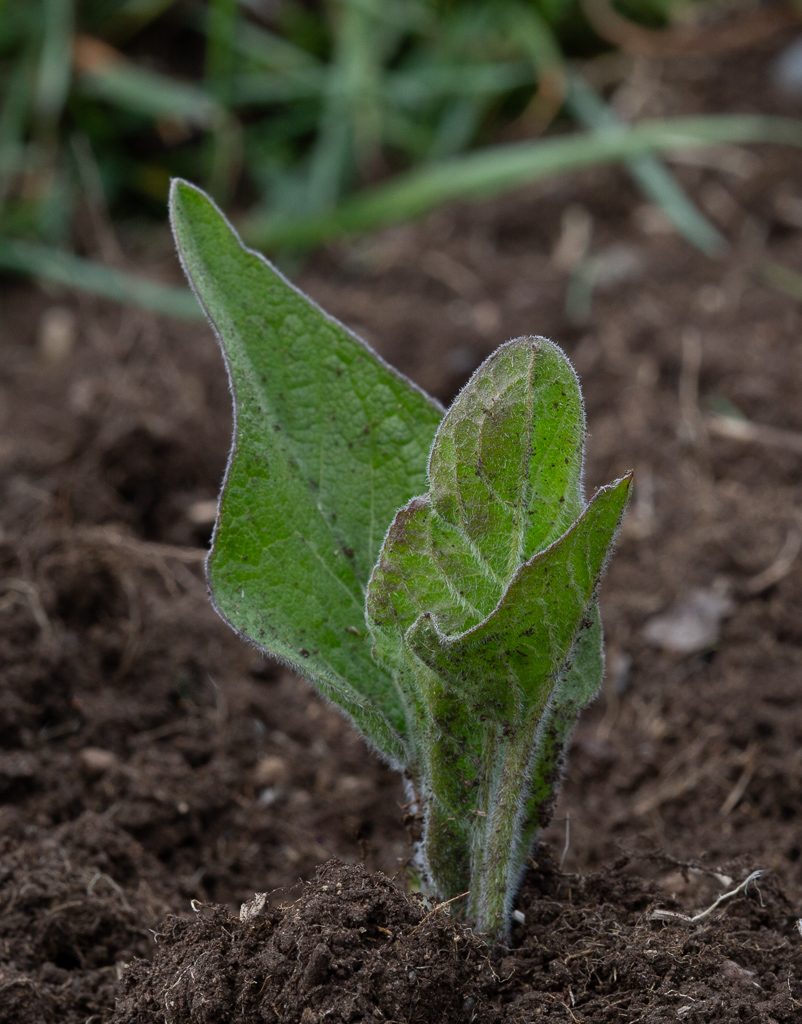 Balsamroot Poking its Nose Out  (In a garden bed. We don’t have them naturally occurring on our property)

And both of them coincide with the very first Camas flower buds showing. 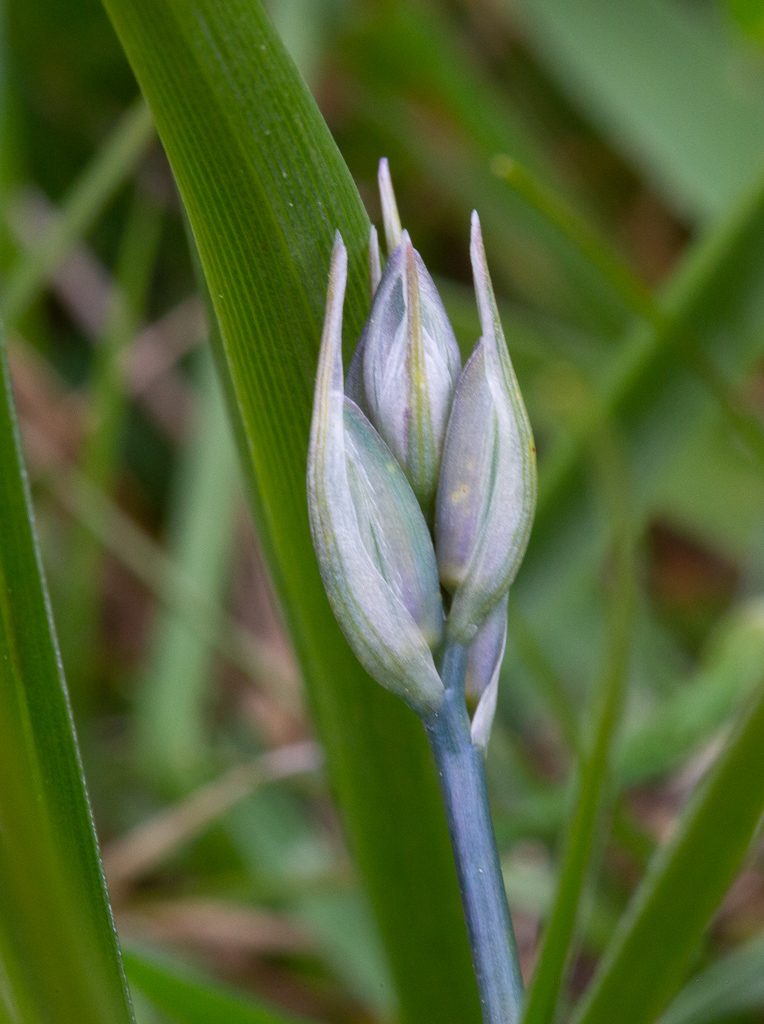 If you check out the post on Tenalquot, you’ll see just how many prairie flowers are starting to bloom now. All these flowers come at the same time that the Savannah Sparrows and White-crowned Sparrows start singing on territory and most of our winter birds have gone except for the pairs that set up their territories here, so my bird feeding station is getting very little attention. However, the first three male Goldfinches passed through on the 11th, so that horde won’t be far behind. My wife has worked to attract them for nearly thirty years and has been tremendously successful. We probably have over 200 coming to our feeders, and that’s before the juveniles fledge and join the mob. 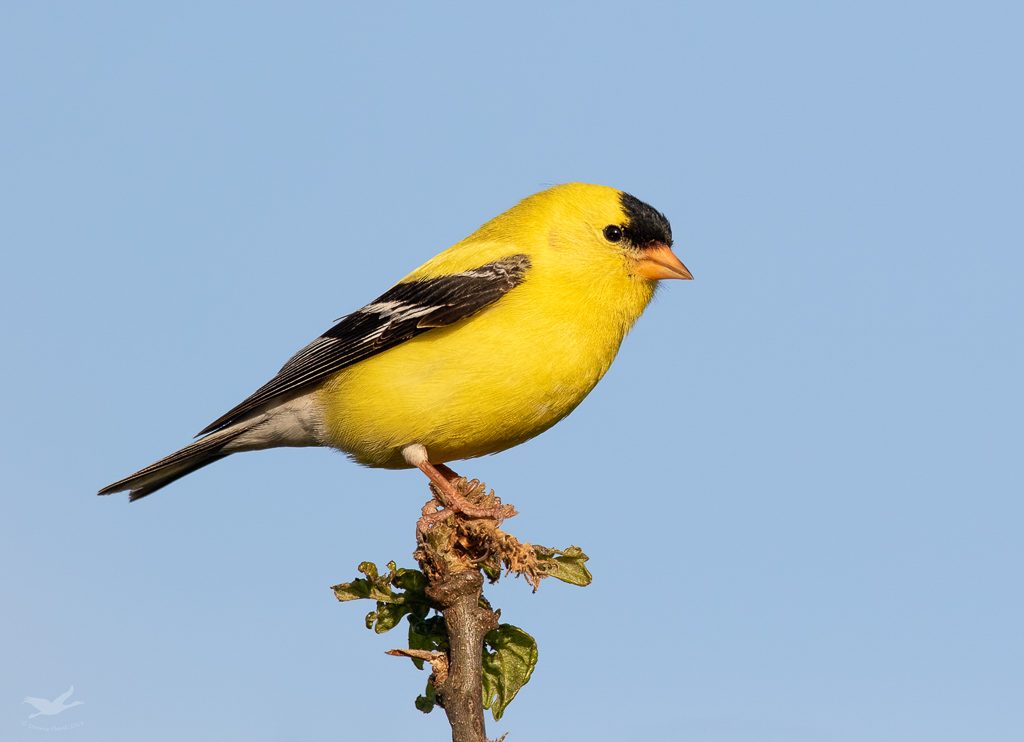 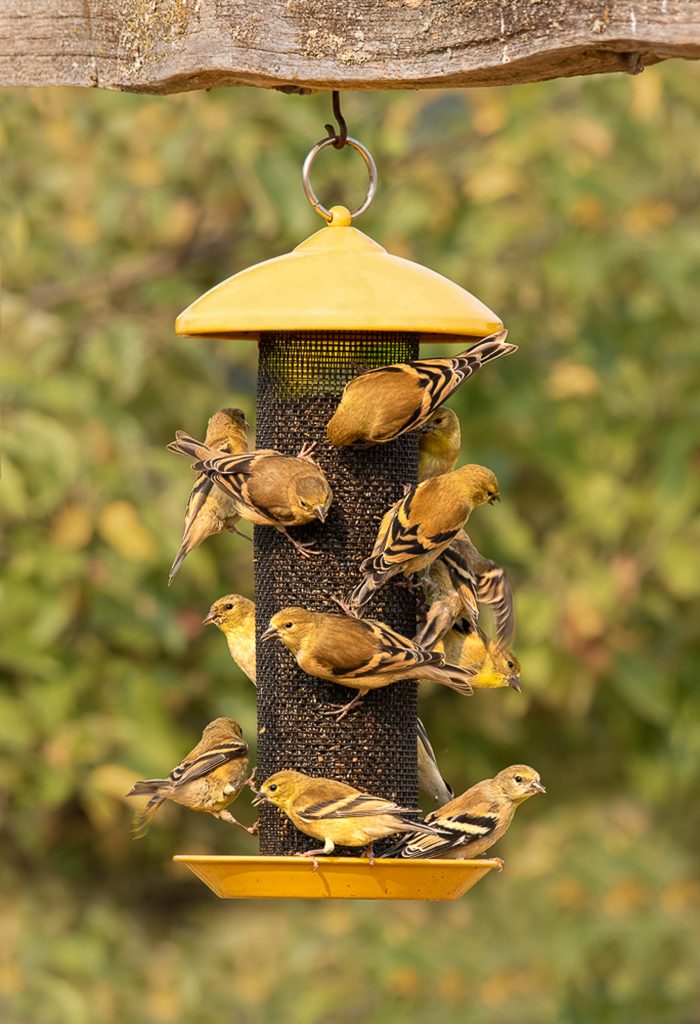 Juvenile American Goldfinches on one of several feeders