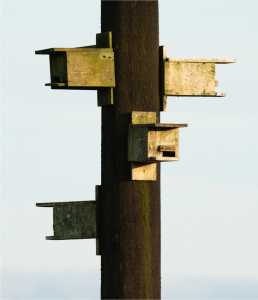 When we think of Purple Martins, our natural tendency is to visualize them in wet areas. Near rivers, lakes or marshy areas, preferably loaded with mosquitoes for them to eat for us! Indeed most of the Purple Martin housing that’s been put up in this area is in or near our estuaries or rivers. Years ago, I remember a volunteer day led by Dan Grosboll when we attached Martin boxes to old pilings from a defunct bridge that used to span the Black River at Thurston county’s Glacial Heritage Natural Area. Even with two canoes lashed together, it was a precarious operation and I don’t recall it being repeated. However, there are a number of old power poles on Glacial Heritage that were left bare when lines were rerouted and about ten years ago PSE used some of these and some additional poles to put up Osprey platforms on the preserve. At about the same time, it occurred to someone that they would be ideal for mounting Martin boxes. This was done and the Martins started occupying them within a couple of years. A little experience showed that while the Western subspecies of the Purple Martin doesn’t much care for the apartment building housing they tend to use in the Eastern US, they do like nesting in colonies. To aid them more boxes were added to poles, so that most now have at least four.

On our parcel near Glacial Heritage and nearly a mile from the Black River, we decided to try to attract Martins and put up a couple of boxes shortly after they started nesting at Glacial. Unfortunately, we didn’t really understand their desires and put the two boxes up some distance apart. While we had some birds come by to look, none ever nested. Finally, about five years ago, my wife, Michelle, decided to just buy a commercially available Martin Gourd system with a pole and six gourds. Our unused boxes were donated for the Glacial Heritage arrays. The first year the gourd system was up we had a bunch of 1st year birds using them, though they only raised one brood of chicks. The second year, all six gourds were full and they all fledged chicks.   They’ve been full ever since. 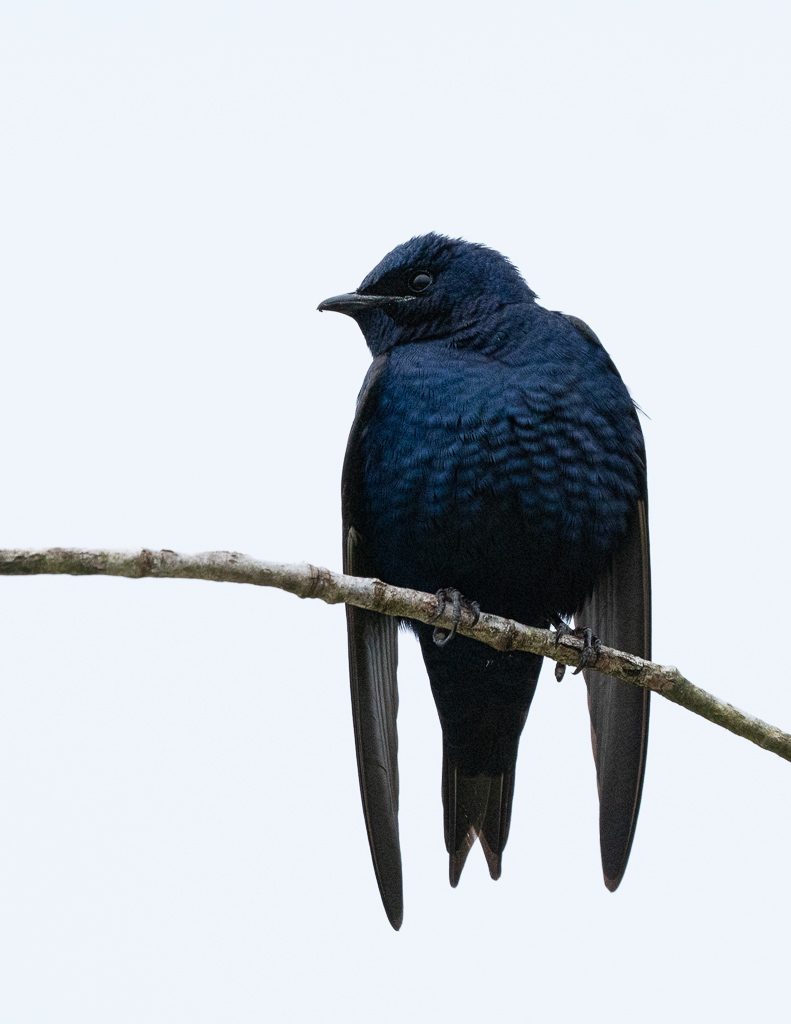 Yesterday, April 5th, the first male of this year arrived. 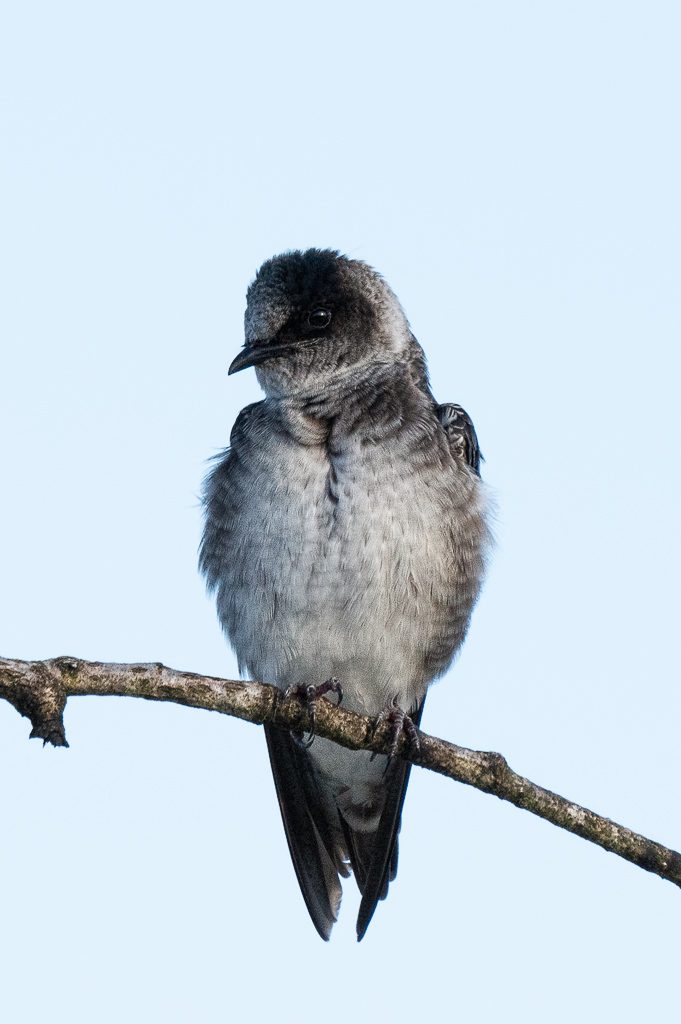 Today, we had two females arrive (unfortunately, I only managed a picture of one) 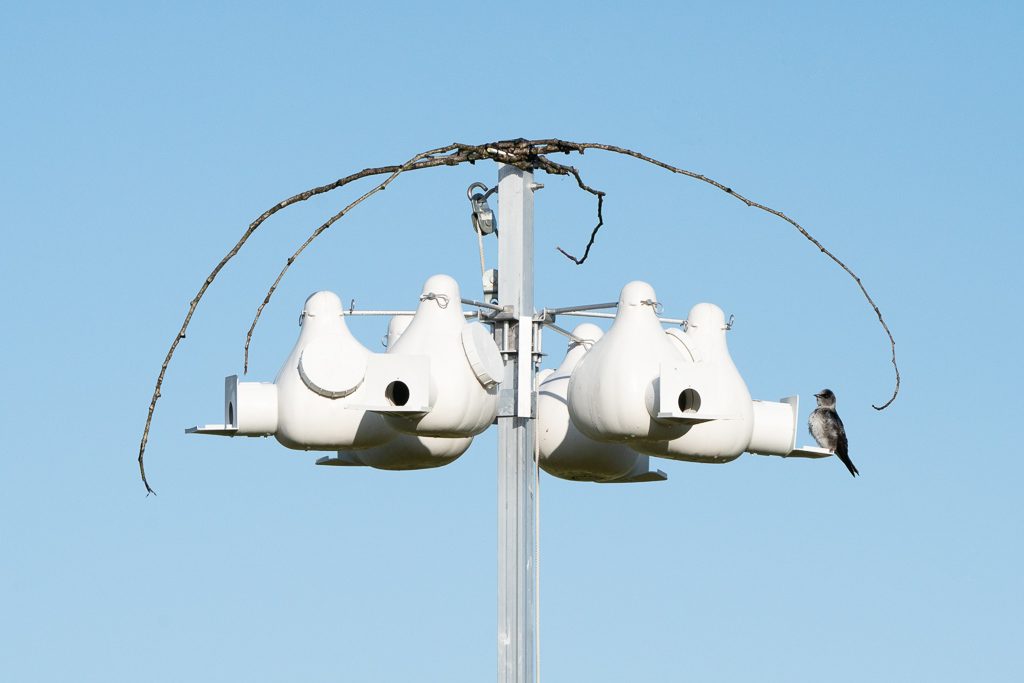 This female appeared to arrive ready to set up housekeeping, and had her gourd already picked out.

The gourd system comes with a couple of aluminum rods at the top as perches, but I’ve replaced them with sticks as a more photogenic option. The Martins don’t seem to care one way or the other.

This system is sold through the Purple Martin Conservation Association (PMCA) and they ask people to monitor the nesting success, hence the pulley and rope for easily raising and lowering the gourd array and the observation ports on the sides of the gourds (which also make cleaning easy). There are other sources for gourd arrays and plans for houses. As mentioned above, if you want to build houses, four is probably a minimum and all attached to the same pole is best. If you make your own boxes, it’s critical to get the entrance dimensions precise or you’ll end up with as many Starlings as Martins. If you do put up a system, you will probably get 1st year birds, all of which look much like the females shown here. They will arrive quite a bit later than the April 5th date of our experienced birds and will likely not nest successfully the first year. But don’t despair-they will probably be back as they seem to be expanding as fast as nesting sites are created in this area. We could easily fill another rack within a year or two.

While I didn’t manage to get a picture of a male and female together today, here’s one from a year or two ago 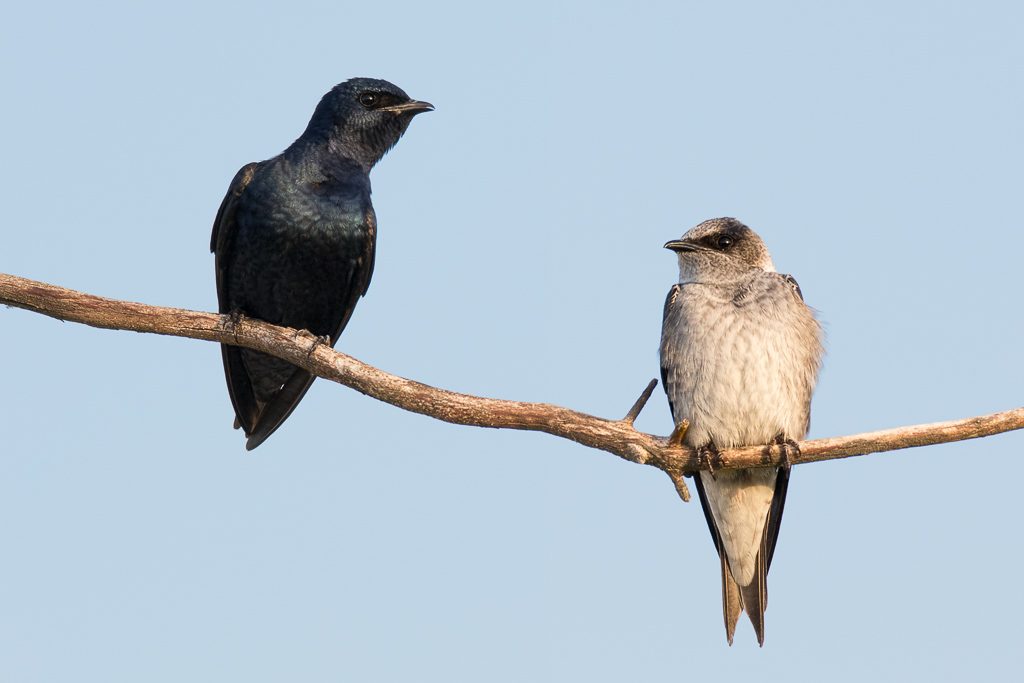 Martins do a tremendous amount of talking to one another as they are very social birds. Sometimes in the morning and evening we will count several more birds than we have housing for and everyone seems to be chatting up a storm. Luckily, they have very melodious voices.

A couple of other new prairie arrivals have announced themselves by voice, but have yet to be sighted by us. The Savannah Sparrow and White-crowned Sparrow have both been heard on my Michelle’s morning walk in our neighborhood. We should see them soon. Meanwhile, click on the hyperlinked names to listen to recordings of their songs on the xeno-canto website.