Since the Stay Home, Stay Safe order came out, all the public South Sound Prairies have been closed for access for all activities.

Since I am lucky enough to have a few acres in the South Sound Prairies, and we maintain most of it as prairie, I thought I’d take a post or three to highlight a some of our backyard bird species that seem to be having a fair amount of success in the last few years. If this closure continues long, I’ll have to hope my prairie starts to put out more blooms than Spring gold. 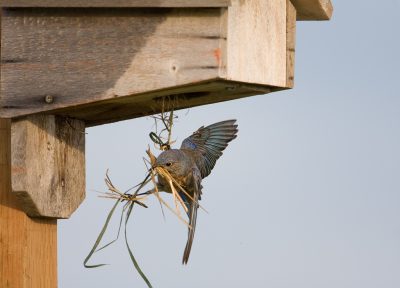 Female with nesting material. Note the hole in the bottom of the box intended for swallows.

The first species I’d like to talk about is the Western Bluebird (Sialia mexicana). We are at the normal edge of the range of this species and it was very rare in this area twenty years ago due to lack of nesting cavities and competition for them with European Starlings and other cavity dwellers. Dave Clouse and Jock Beal started a Bluebird box program in 1982 on what was then Fort Lewis. Sam Agnew, an avid volunteer helped expand the program on both Ft Lewis and McChord (now combined into JBLM) and twenty years ago The Nature conservancy started putting up boxes on Thurston county’s Glacial Heritage Preserve. As other prairies were acquired by The Nature Conservancy and later The Center for Natural Lands Management, more nest boxes were installed at those preserves and are regularly monitored. The last few years have seen very good nesting success (they seemed to like those hot dry summers we had. There was a slight dip in productivity with last year’s milder weather, but it was still a good year). 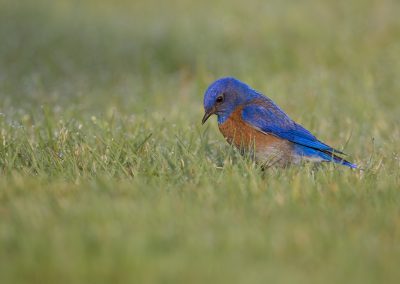 Our close relationship with this species began in 2008 when a pair showed up, chose the most inappropriate nest box on our property, and proceeded to raise three broods.

From the beginning, they were a fairly confiding species to deal with photographically, and with a little patience it was possible to get reasonably close as in the image of the male foraging in the lawn below.

Unfortunately, as some of you may recall, December of 2008 brought heavy snow to the South Sound and it was capped with freezing rain creating a coat of ice over the snow. Although the range maps in the field guides don’t show it, Western Bluebirds usually winter over in this area as ours tried to do in 2008. Since we were snowed in as much as the birds were snowed out, we tried putting out some feed that insectivores might be interested in, but they didn’t make the connection. 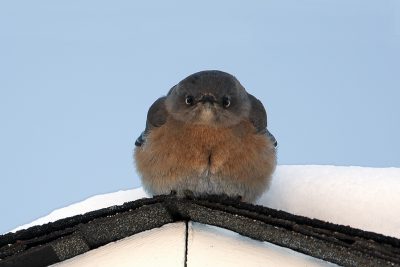 Puffed up young Bluebird trying to handle the snow and cold. We found it in the snow the next morning.

Most of the birds didn’t make it, but apparently at least one did because we had Bluebirds again in 2009 and almost every year since (they deserted us for the neighbor one year).

We decided that we didn’t want to watch so many Bluebirds die in the winter again, so when they had fledglings the next year we decided to try to train them to eat mealworms placed in a bowl. As usually seems to be the case, a fledgling was the first to try something new, but it didn’t take long for the others to catch on. 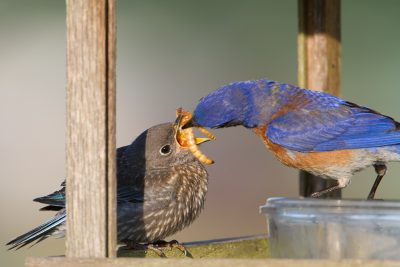 This image from 2013 illustrated the feeding process for new fledglings.

The young also get plenty of natural food with this program since we just give them a few worms a day to train them. Interestingly, Sue Danver forwarded a recent study to me done on Eastern Bluebirds that showed an increase in survival and decrease in parasite load for nestlings where there was supplemental food provided.

The first brood in the spring seems to mostly be fed on the abundant insect larvae available at the time, so the mealworms fit right in. But even in August, as in this image, they manage to find larvae.

Adult insects also form a large portion of the diet of the youngsters as these images of the adults carrying food to the nestlings show. 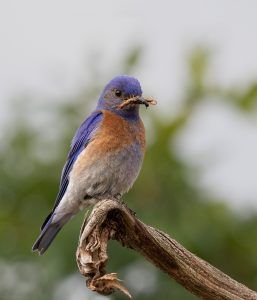 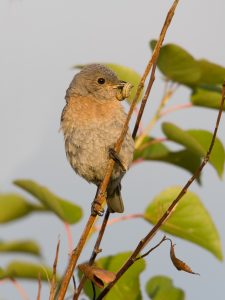 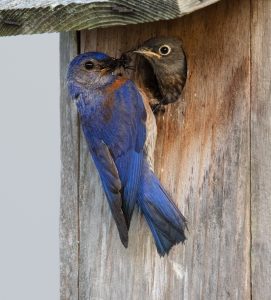 The Bluebirds have paired off for this year and I saw the female carrying nesting material a few days ago. We’ve started supplemental feeding and it’s great fun to have them waiting for me when I walk out with the bowl. 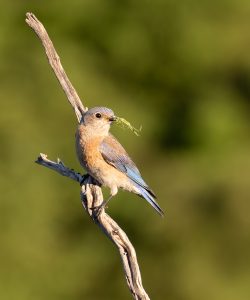 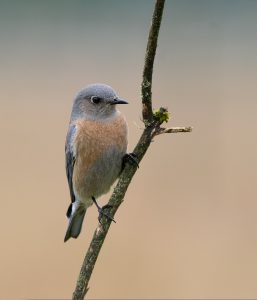 My hope is that they continue to multiply and eventually we get more than one pair at a time on our property. As a photographer, I would love to get more images like this one: 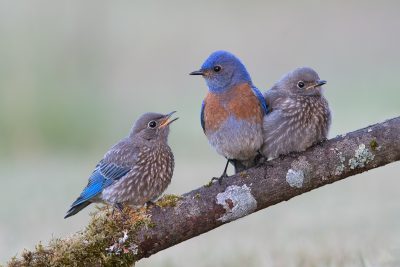 All photographs courtesy of Dennis Plank.

While we decided that holding Prairie Appreciation Day this year was not feasible given the uncertain conditions, Friends of Puget Prairies decided we should encourage everyone to get out and enjoy those prairies that are publicly accessible. To that end, we thought a “virtual” Prairie Appreciation Spring, accessible via the internet might spur people to get out of their houses and apartments and get some much needed fresh air. As an added bonus, it provides impetus to us to get out to the prairies to see what’s going on, take pictures and pass it on. This, then, is the first installment.

Today was a gorgeous day to be out in the open air enjoying the morning fog that does wonders to emphasize the Mima Mound topography of many of our prairies and creates an intimate and mysterious feel. Since the clear weather has created freezing temperatures overnight, the fog formed frost on all every leaf and spider web (yes, the spiders are out and busy). 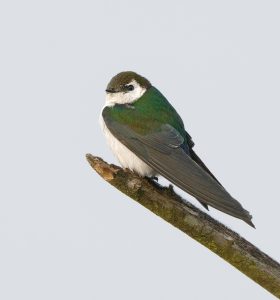 The Swallows are also back and actively arguing over nest boxes and even they acquired a bit of frost as evidenced by the drops of melted frost on this Violet-green Swallow photographed Wednesday morning. 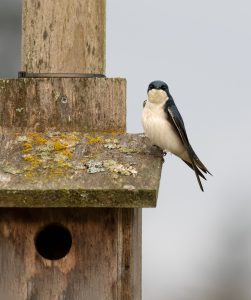 Our other species of cavity nesting swallow, the Tree Swallow is also back and looking for a place to raise their young this year. This one, in an image taken last week, seems to have laid a claim on a box already.

In addition to the swallows, Flickers are whickering constantly, Kestrels are setting up housekeeping, and the Red-tailed Hawks have been at it for some time.

As for the plants, the Spring Gold (Lomatium utriculatum) has gotten a nice start. 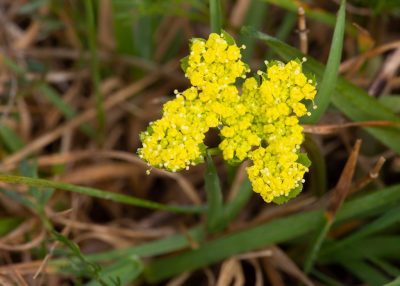 This is the first flower to bloom on our prairies in the spring and it lasts a long time, with the bloom heads multiplying on the same plant. It is still in very good form at the traditional Prairie Appreciation Day on the second Saturday of May. For the best specimens, look for a nice south facing slope. The earliest blooms are just little spots of yellow less than a centimeter in diameter. This one, taken Thursday, was about the size of a quarter. 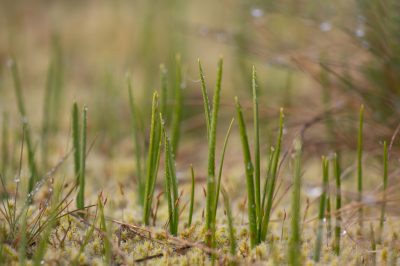 While you’re on that nice, warm south-facing slope, look around for the leaves of the Chocolate lilly (Fritillaria lanceolata). These were about 3 inches (7.5 cm) tall today. 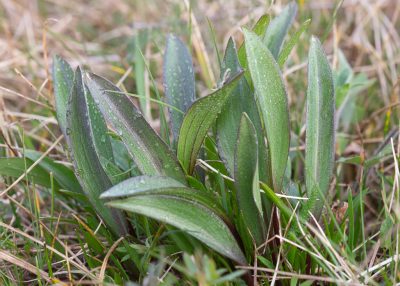 That star of our prairie flowers, the Common Camas (Camassia quamash) is coming along nicely with many shoots over two inches (5 cm) tall and some as much as four (10 cm). The moss, still nicely green from our winter, made a nice background for this little stand of Camas. 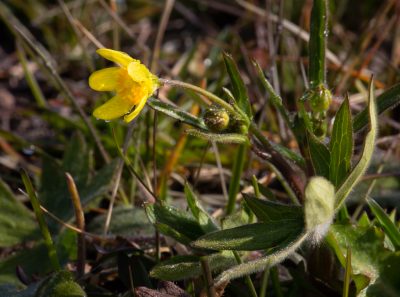 To top off today’s discoveries, Tim Leque of the Center for Natural Lands Management told me he’d spotted some Western Buttercup in bloom in a controlled burn area from last year. It didn’t take very long to find one.