Lizzie Carp moved to the northwest to work as a wildland firefighter, but after working in two communities devastated by heavy metal soil contamination due to mining, she decided to earn a master’s degree in soil remediation. She now works as a soil scientist for USDA-NRCS, where she is currently mapping the soils of Olympic National Park.

The Puget Sound prairies are a unique ecosystem supported by unique soils. Droughty and nutrient-poor, these soils provide a leaner existence for plants than prairie soils in other parts of the country, but that is in part what gives them their unique ecology. This post will describe the origins of these soils and why they matter.

The formation of Puget Sound prairie soils began about 15,000 years ago with the retreat of the Vashon ice sheet, a massive glacier that formed the Puget Trough and terminated in southern Thurston County, Washington. As the glacier melted, it left scattered deposits of sand and water-rounded gravel throughout Puget Sound. Since then, this glacial outwash has weathered to form today’s prairie soils.

Five factors influence how a soil develops and behaves: parent material, climate, organisms, relief, and time. Parent material is the geologic origin of the material that weathers into soil. Glacial outwash is a parent material that consists of larger, heavier mineral particles, like sand and gravel, that were deposited by the torrent of meltwater, which carried off the lighter silt and clay. This coarse texture gives Puget Sound prairie soils their low water- and nutrient-holding capacity. 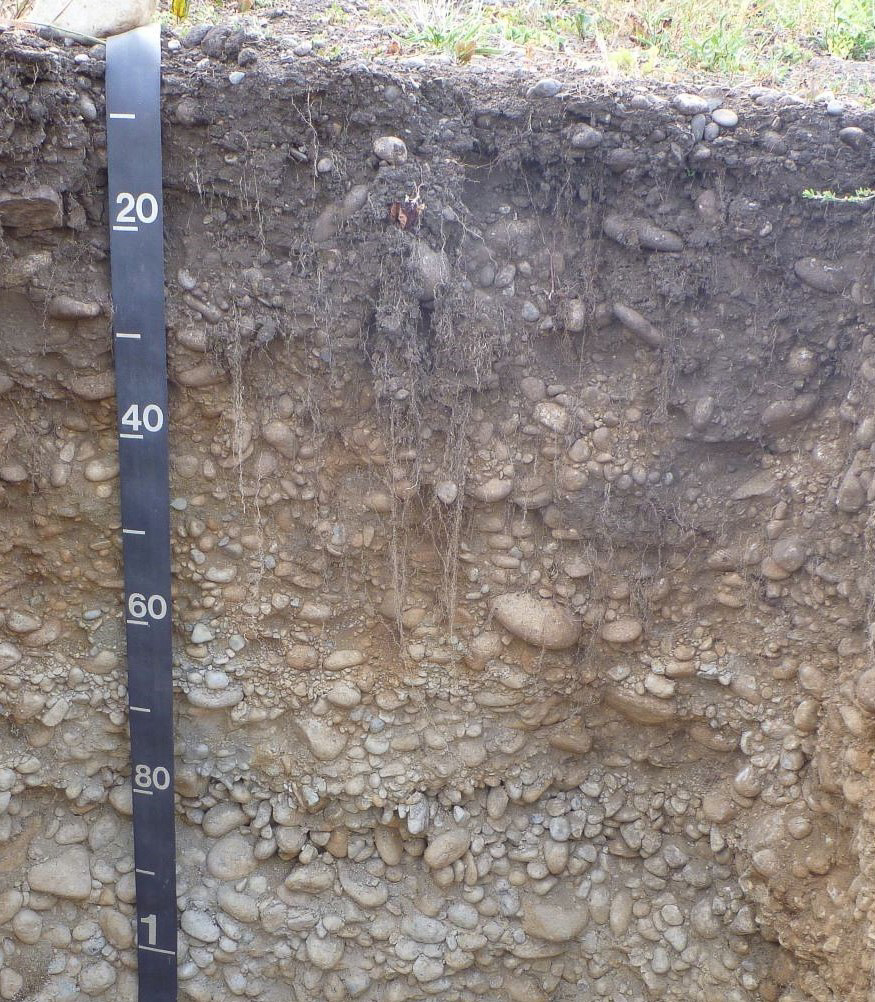 Climate influences what can grow in the soil, the rate of microbial processes like decomposition, and the mineral content of soils. Western Washington’s prolific rainfall washes away nutrients and minerals that balance pH, creating acidic and nutrient-poor prairie soils. 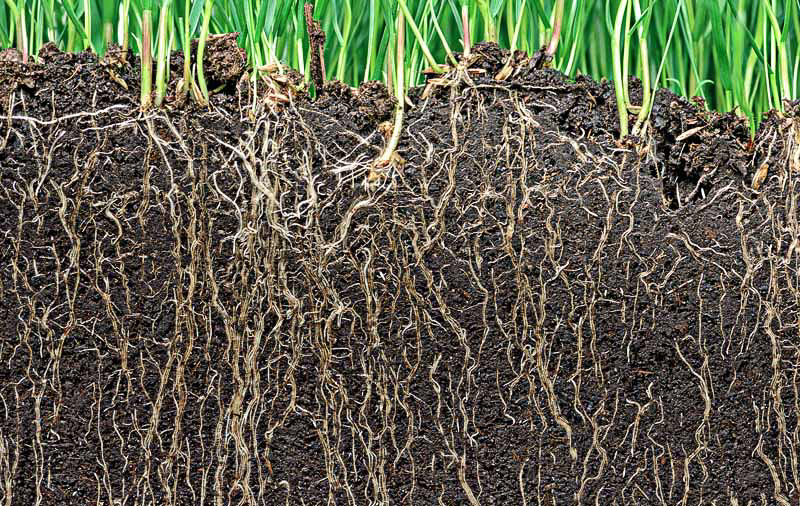 Relief, or topography, is the physical shape of the landscape: its slope, aspect, and tendency to collect or shed water and sediment. Soils on warmer and drier south-facing slopes support different vegetation than those on north-facing slopes, which tend to have more moisture. Soils that form on convex, erosive surfaces, such as the shoulder of a hill, are shallower than soils at the bottom of a slope, where they accumulate thicker surface layers. Soils tend to be drier on sloping or convex surfaces, which shed water. Spana, a Puget Sound prairie soil found in swales and depressions, is somewhat poorly drained while Spanaway, a geographically associated soil found on flat or convex surfaces, is somewhat excessively drained. 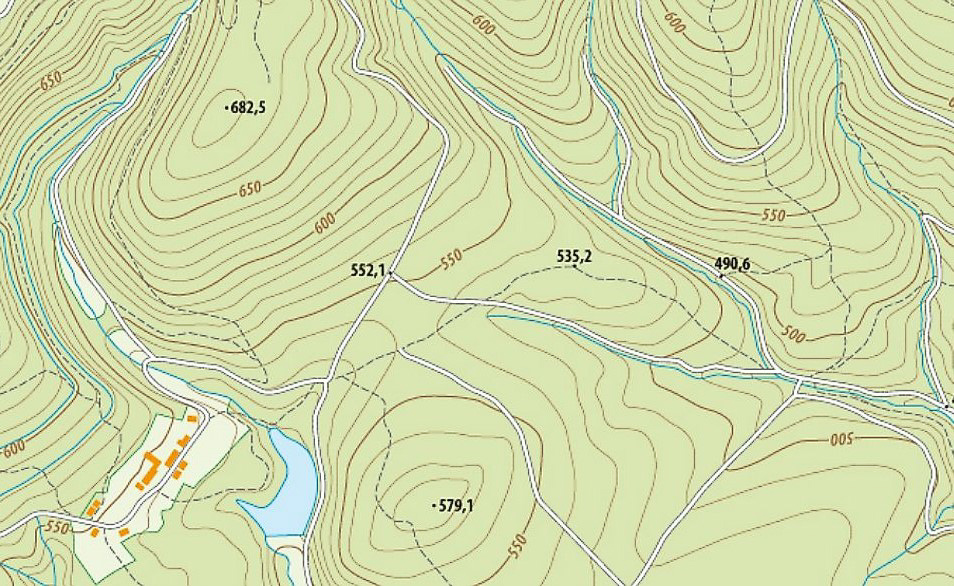 A topographic map shows the location of different soils. (https://www.worldatlas.com/articles/what-is-topography.html)

Finally, soils need time to develop. Older soils function differently than younger ones. With time, soils undergo significant weathering by organisms and rain. Soils acidify, and their original minerals dissolve to form red clays. Leaching carries dissolved substances downward, creating discernible layers called horizons. Young soils, which may have been deposited relatively recently by a river or a glacier, contain the original minerals of their parent material and show little horizon development. At only about 15,000 years in age, Puget Sound prairie soils are considered young soils. 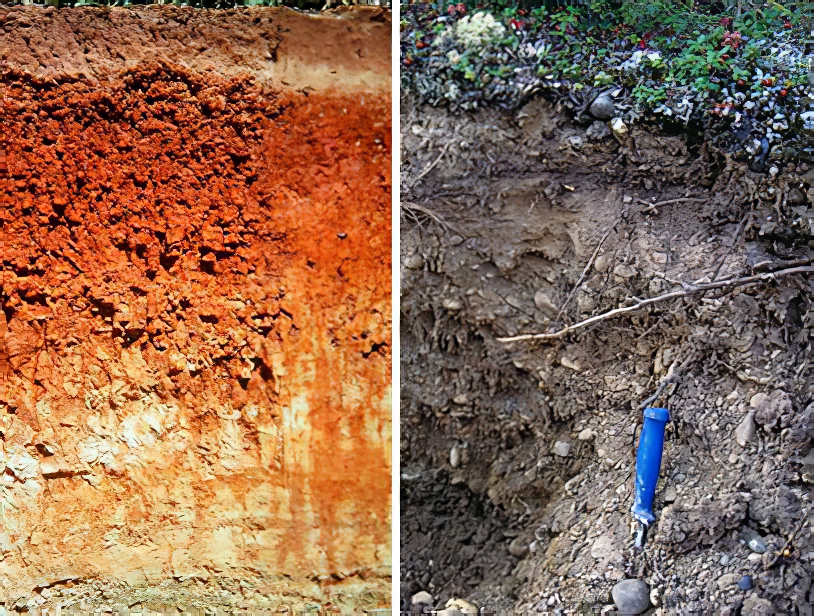 Left: A well-developed soil (Alfisol) with layers of clay and calcium carbonate accumulation (A.R. Aandahl, Soils of the Great Plains: Land Use, Crops and Grasses, University of Nebraska Press, 1982; https://www.uidaho.edu/cals/soil-orders/alfisols#gallery-cbc9288e-2c8a-4900-b81e-210206d4522c–slideshow)
Right: A soil that formed in recent outwash in Alaska. (http://web.unbc.ca/~sanborn/Photo_Galleries/Yukon/Stewart-neosol-(nr-Mayo-YT)(L).jpg)

The five soil-forming factors are a useful tool for understanding soil development, but there is still a soil mystery on the Puget Sound prairies: the mima mounds. These mounds have a thick, dark, less rocky surface and sit atop very gravelly soil. From these observations, scientists have come to different conclusions on how the mounds formed, including from earthquakes, shrink-swell action, or windblown soil. The first theory has been debunked, as recent earthquakes have not been observed to form similar mounds. More recent studies claim that the mounds formed over centuries as gophers built homes above the rocky surface or as plants depleted water and nutrients from the inter-mound spaces, leading to accumulations of soil—the mounds. 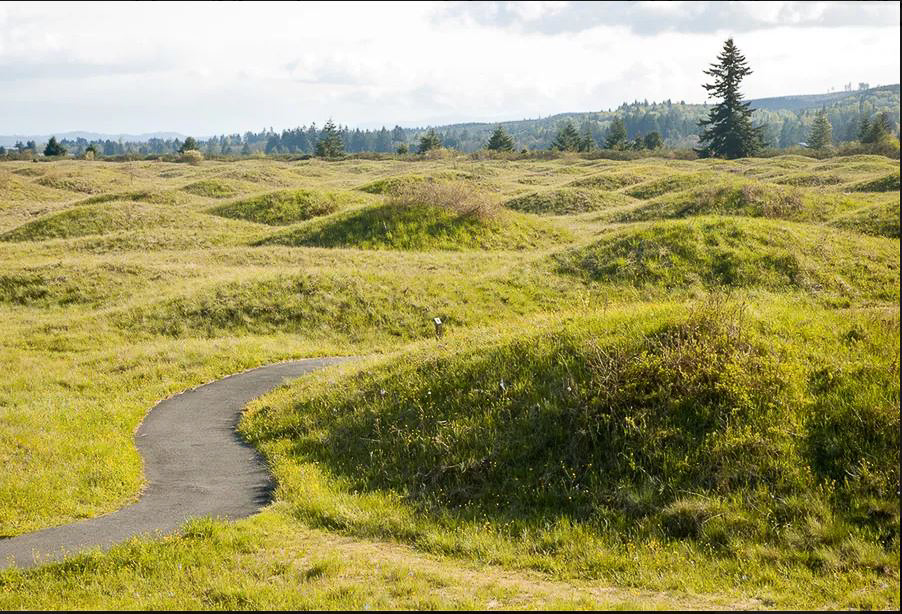 Understanding soil is essential for understanding prairie ecology. Relationships between native plants and soils can be specific. Native plants may specialize by nutrient or moisture levels in soil, sometimes because they can live in adverse conditions, like droughtiness or low soil fertility, where others cannot.

If you would like to learn more about soils for prairie restoration, you can see which ones are mapped at your location using NRCS’s Web Soil Survey and SoilWeb. With these tools you can explore soils’ uses, limitations, and intrinsic properties that determine what kind of vegetation they can support. You can also learn how to recognize different soils in the field based on their profile description and where they occur on the landscape. When in doubt, you can always contact a soil scientist!