Beautiful Moments on the Prairie: Renewed Life from Seeds

Beautiful Moments on the Prairie: Renewed Life from Seeds.  Post and Photos by Meredith Rafferty

Meredith is a photographer who marvels at the world around us, night and day. Her happiest moments are connecting with nature and capturing special moments to share with others. She volunteers with the Center for Natural Lands Management and the Nisqually Land Trust, and is past President of the Olympia Camera Club. She delights in the wonders of the Pacific Northwest, from prairies to mountains, rivers to Puget Sound, morning sunrises to magical night skies. You are welcome to explore with her on Instagram.com/ImageConnections.

Beautiful Moments on the Prairie: Renewed Life from Seeds

Volunteering on the South Puget Sound Prairies is always an adventure. I’ve enjoyed every outing for its discovery and learning. I started with Scotch broom pulling, a straight-forward task, and discovered a larger world of complex prairie restoration.

While out on the prairie, I was of course first attracted to the blooming wildflowers. But there was much, much more to the story of the prairies. My next discovery came inside at the “volunteer house” at Glacial Heritage. Walking in, I found volunteers seated at tables, very engrossed, heads down, with bright lights focused on small piles of debris in front of them. I heard murmurs of “doe-hee” which I thought might be a common name for a plant liked by deer. And “viper” brought up images of a snakelike shape. On the tables were small manila envelopes marked with “SCS” (hmmm, was that Second Class Sorting?}.

The volunteers emptied the contents into round brass tins with screening across the bottoms. They shook the tins and then I could see the seeds falling through, leaving behind much of the bits of leaves, seed pods and such. Many of the seeds were tiny. Placed on a white plate to heighten their visibility, they were further separated from the chaff using hand tools into small piles of very clean, single seeds.

Volunteer Don Guyot, whose hands you see in these photos, was one of the best at the intricate work of coaxing small seeds away from the plant debris. This hand work is reserved for small amounts of collected seed. Larger amounts from the seed farm are processed mechanically as much as possible. Sometimes the seed pods needed to be broken apart to release the seed. In the left photo, Don used a hunk of board to grind the pods and encourage the seed to fall through the tin’s screen. Photos by Meredith Rafferty

It turned out that “doe-hee” was actually the acronym DOHE which stood for the early Spring wildflower, Dodecatheon hendersonii. And VIPR stood for the yellow-flowered Viola praemorsa. Their seeds had been collected on the prairies at SCS which was the property, Scatter Creek South. Indeed, wildflower seeds are collected at a dozen different conservation sites across the South Puget Sound prairies and the manila envelopes were marked with their locations. The four-letter plant acronyms have now expanded to six letters. Acronyms are formed from the plant’s Latin name, using the first three letters of each part of the name. Accurate identification and labeling are critical to maintaining the genetics, inventory, and production of hundreds of different native plants. 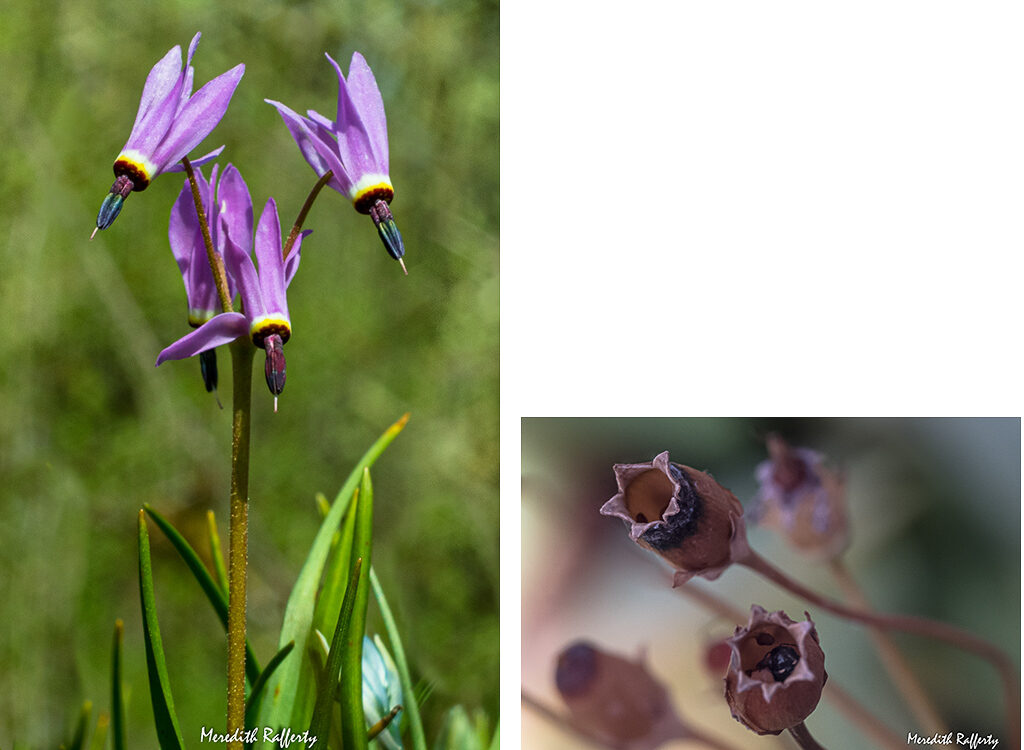 Dodecatheon hendersonii is the unique Shooting Star of Springtime. It presents a photography challenge to get down at eye level to capture its downward pointed shape. The seed pods will form as shown in the right photo (hey, there’s a surprise occupant in the bottom seedpod!) The ripe seeds usually shake right out but are tiny and must be carefully contained. Photos by Meredith Rafferty 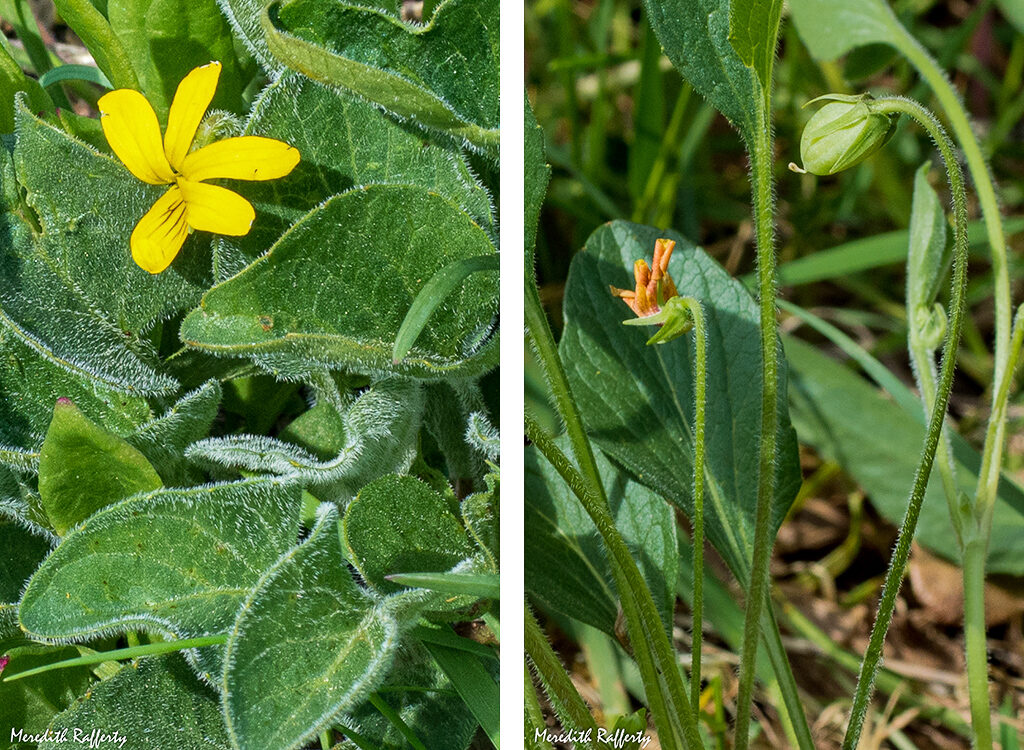 The fuzzy leaves of Viola praemorsa become apparent when viewed closely. The yellow flower will yield a seedpod to be picked when it is ripe. Photos by Meredith Rafferty

In those earlier days of my first visit, much of the wildflower seed collected from the areas were cleaned by hand. Volunteer Gail Trotter still regularly contributes her experience to help out. But now CNLM staff member Forrest Edelman applies mechanized tools along with hand labor, to produce piles of clean, single seeds. He cleans not only the wild-collected seed but also the quantities produced by the Violet Prairie Seed Farm in the Tenino area. 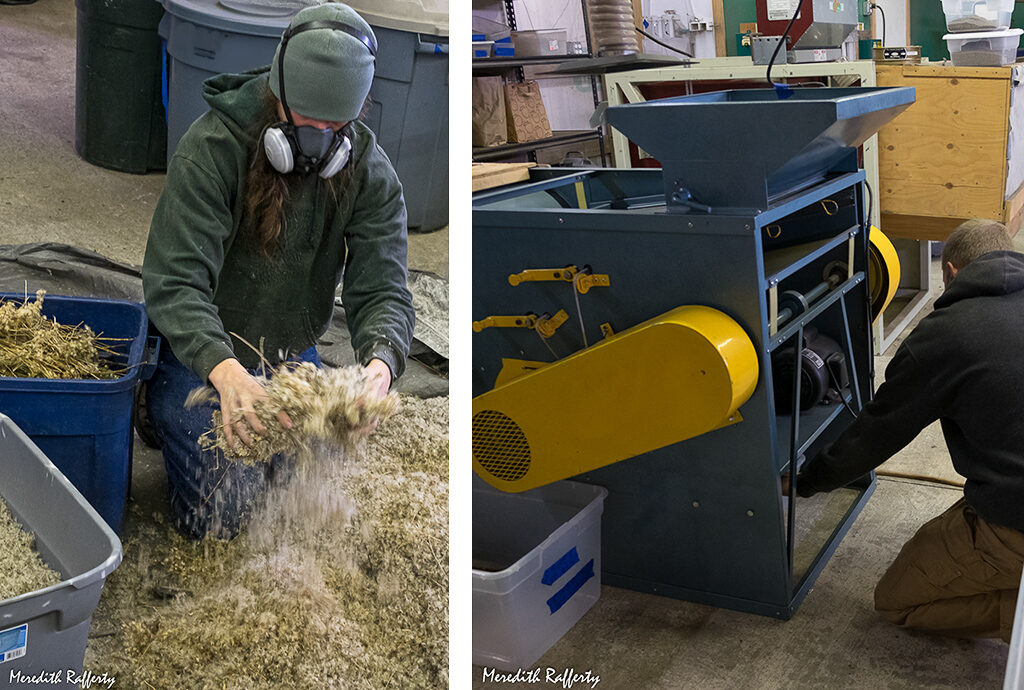 Forrest Edelman readies a collection of Sericocarpus rigidis, also known as Aster curtus. It is a challenge to separate the seed from its fluffy part (I’m sure there’s a technical name for the fluff). Mechanical extraction works. Other seeds require other machinery. Photos by Meredith Rafferty 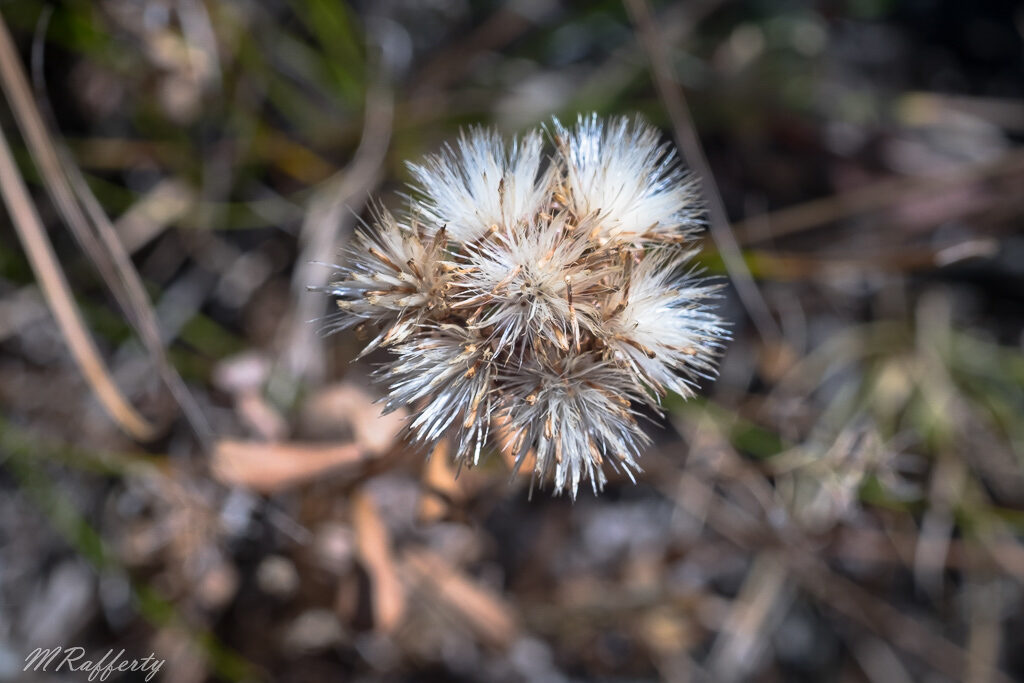 Ultimately, all this preparation of the seeds brings us to the next critical phase of restoration: planting which includes its site preparation. Some types of seeds will be sown directly at their conservation or farm sites; others will be planted in “plugs” in a nursery setting and later transplanted. 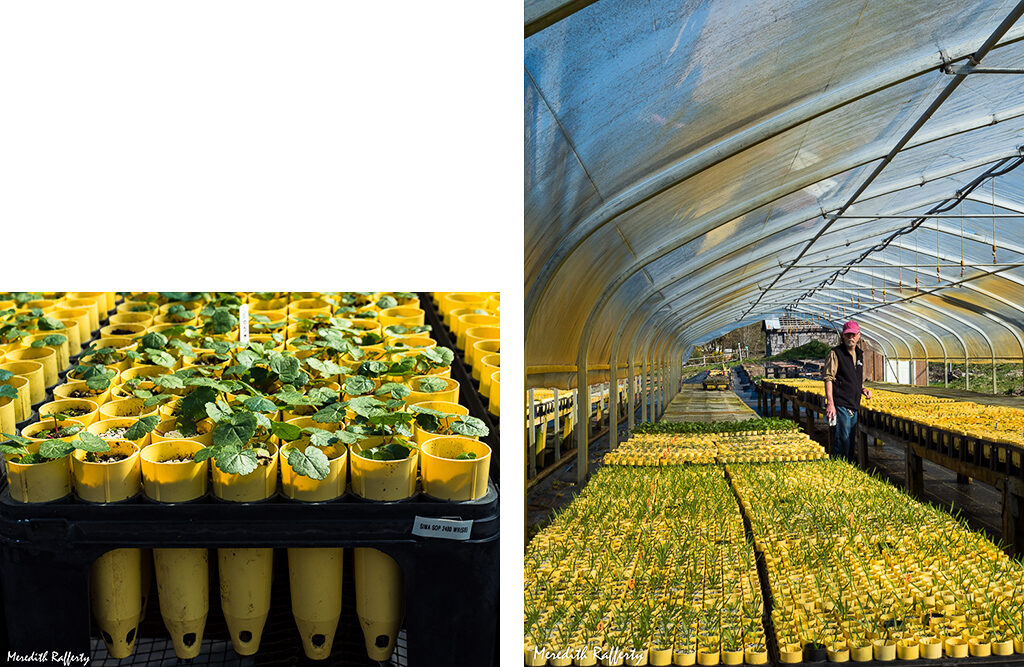 Starting seeds in “plugs” enables closer management of their growing conditions and easier transporting to their final destinations. Photos by Meredith Rafferty 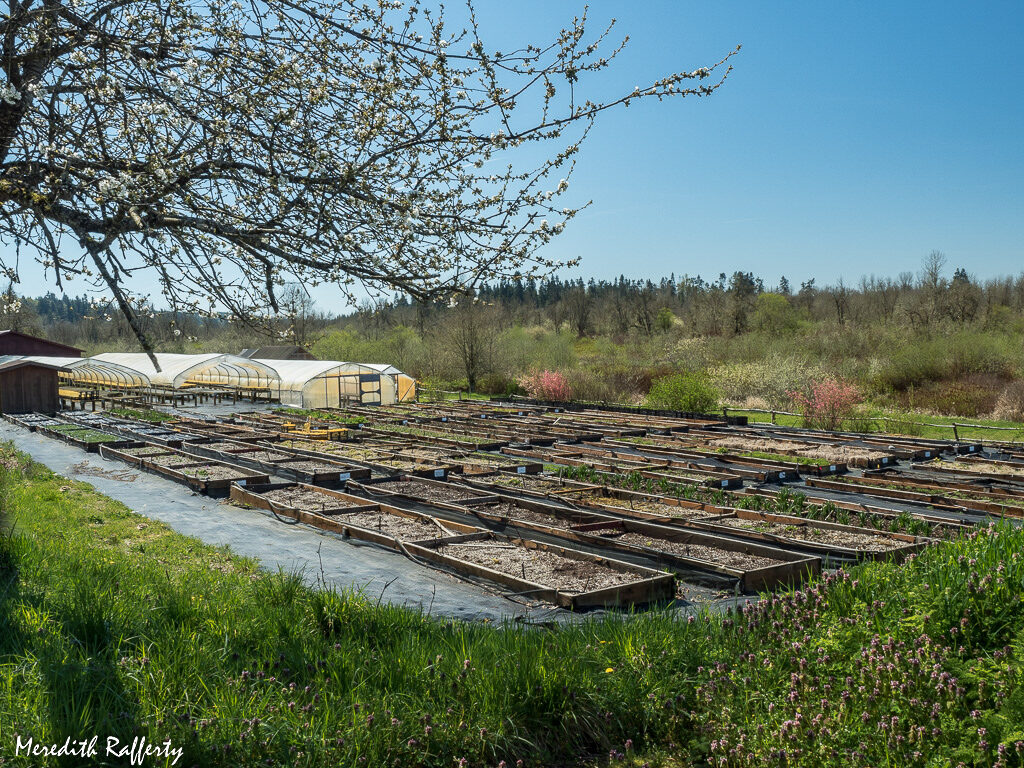 Pictured are the seed cleaning and nursery operations at CNLM’s Shotwell’s Landing site. Spring brings a burst of life in its beds beside the Black River. Photo by Meredith Rafferty

The moment of truth will be when the plants start popping up, reaching for the sun, on their way to be part of the prairie ecosystem. But there is more to the journey before planting. Indeed, in the next blog, let’s go to the wildflower seed collection. It turned out to be an interesting and far-ranging process.