This time of year the prairies remind me of an aging genius. Most of its productive life is behind it, stored in seeds. Waiting. Waiting for just the right conditions to flourish and create yet another generation. But here and there, buried in the uniform gold of the grasses, are sparks of life still perpetuating the current generation and bringing great beauty in the process.

Of the natives, the most obvious is Canada Goldenrod, Solidago canadensis, growing in isolated patches on the prairies, predominantly on roadsides, but here and there on the open prairie. When I first started volunteering here, there was none of this beautiful plant on Glacial Heritage, nor do I recall seeing any on Mima Mounds. Now the clumps of this plant are fairly common and it is a lovely addition to the late summer prairie as well as an excellent late season nectar source. 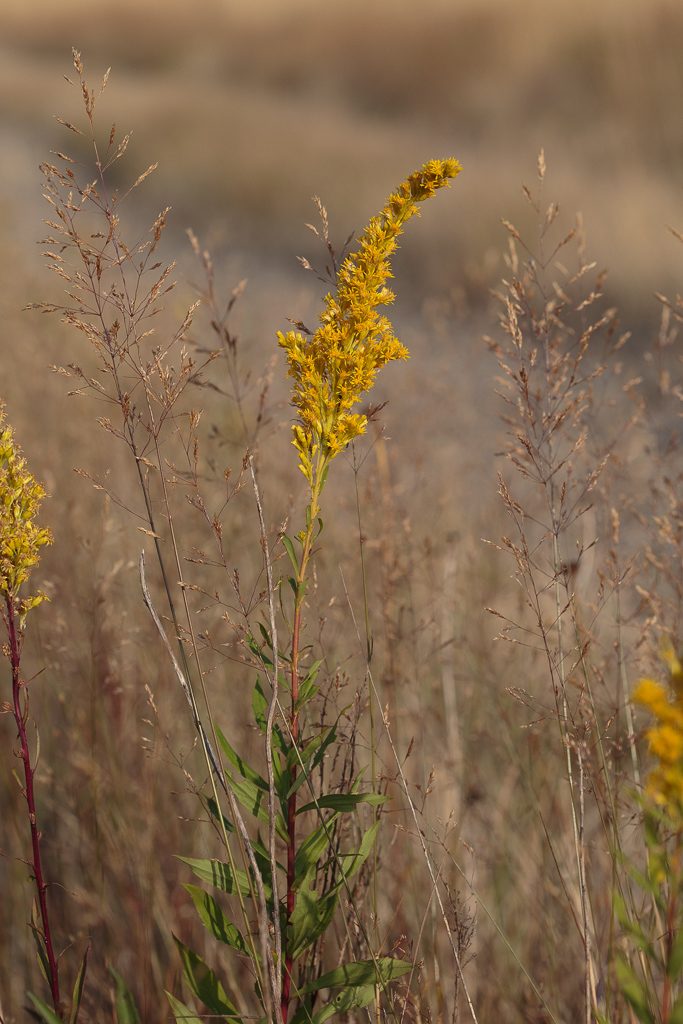 Another goldenrod, Solidago missouriensis, is also blooming this time of year and in favorable situations may be visible above the grasses. It tends to be found as individual plants, though more concentrated in some areas. I tend to find it in areas of slightly better soil and a bit more moisture, though there is little of that on the prairie this time of year. I describe our soil as having all the water retention of a sieve since it is basically a gravel bar with a very thin layer of organic soil on the top. 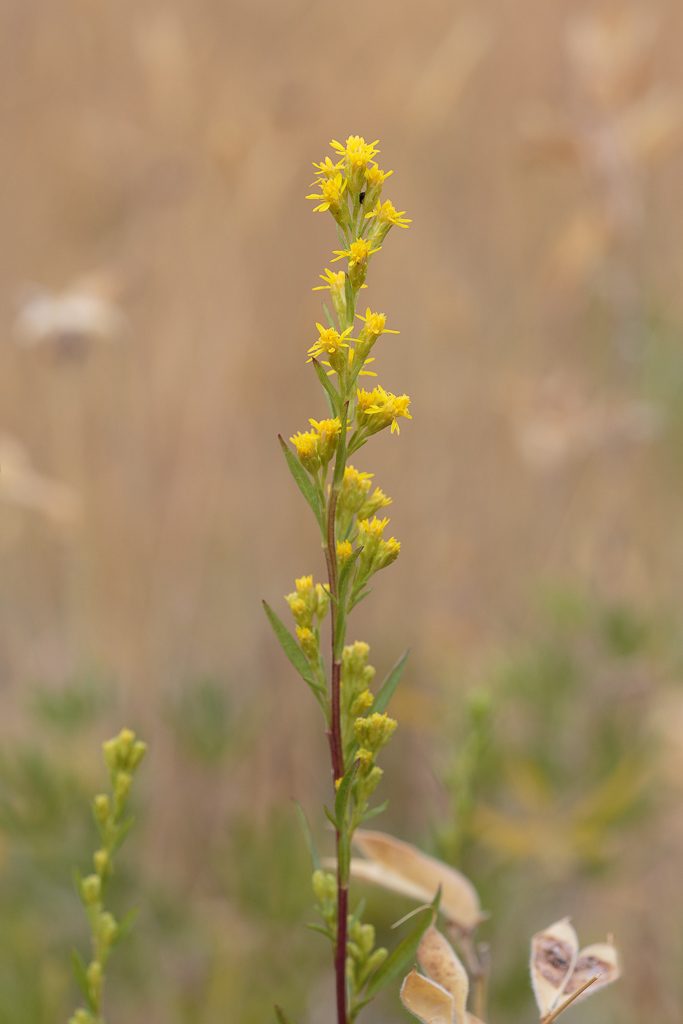 Continuing with the composites, Western Pearly Everlasting, Anaphalis margaritacea, is also in bloom, though small white heads are relatively inconspicuous and it tends not to rise above the grasses, particularly the invasive pasture grasses. 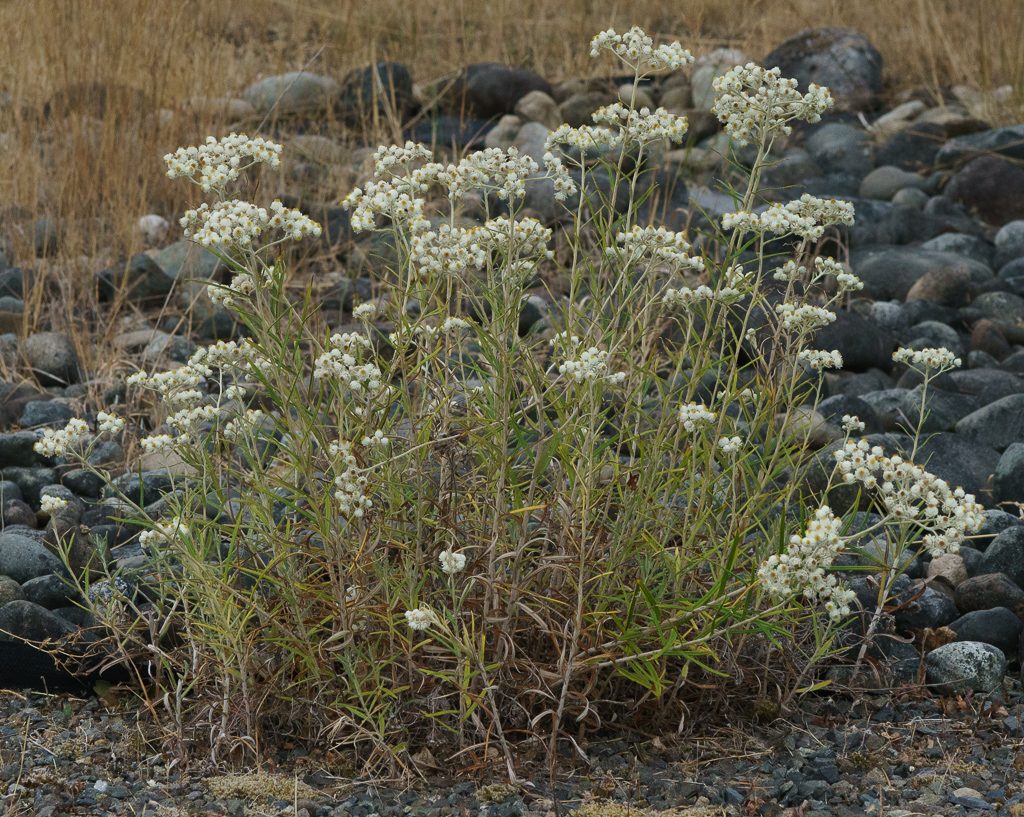 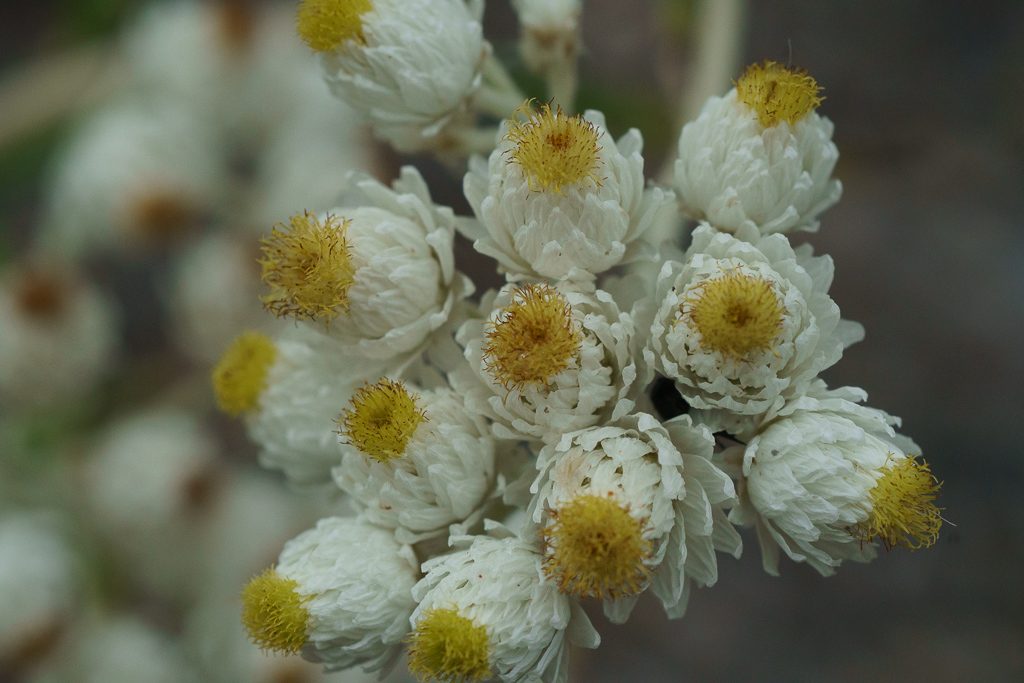 A close-up look at the Pearly Everlasting blossoms, photo by Dennis Plank 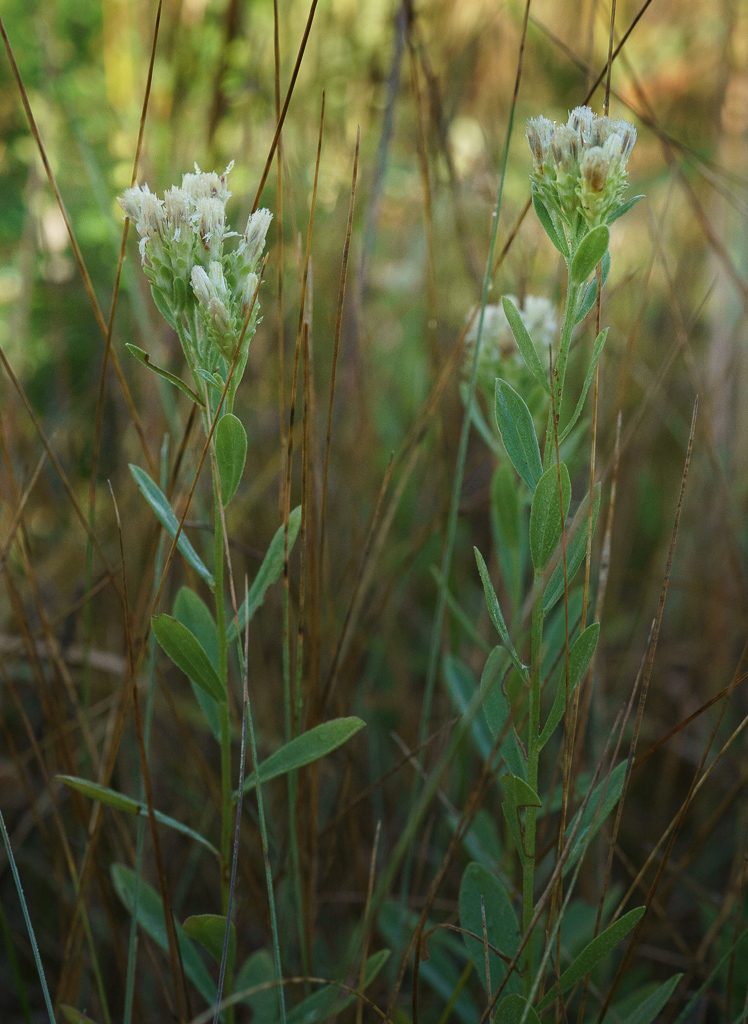 Spreading Dogbane, Apocynum androsaemifolium, is also supposed to be blooming this time of year, but I haven’t been able to find one with blooms yet. This is a spreading woody plant that can form quite large patches and is a very important nectar source this time of year.

Another plant still blooming is Scouler’s Catchfly, also known as Simple Catchfly or Simple Campion, Silene scouleri. I’ve also heard it called Stickyweed because it does stick to your fingers. Like most of the plants this time of year, it’s not very showy, so you have to look closely to appreciate it. 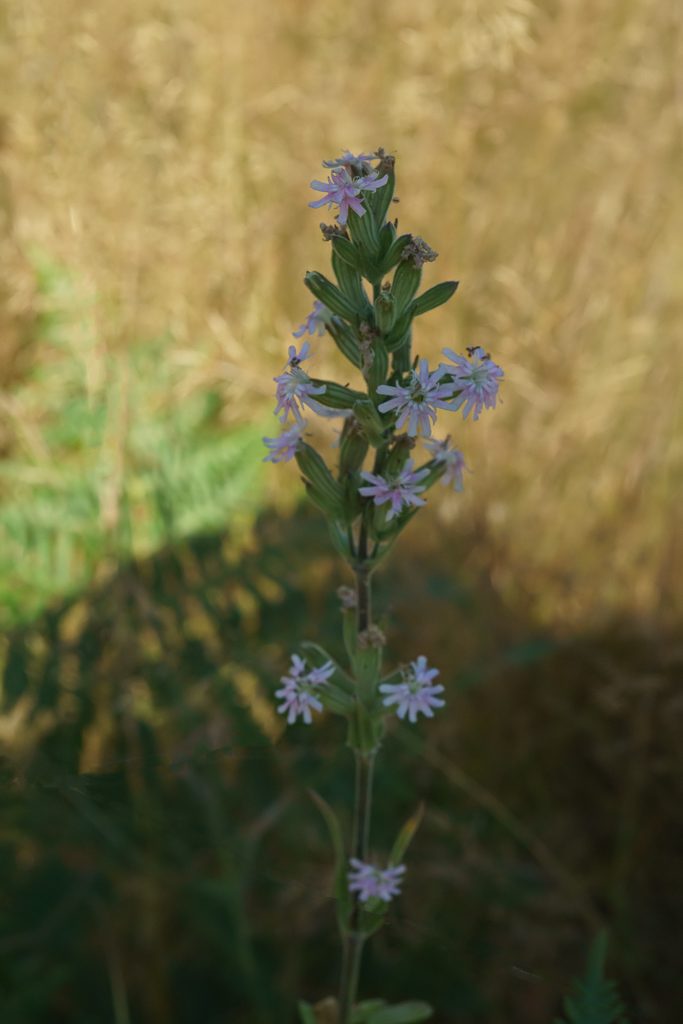 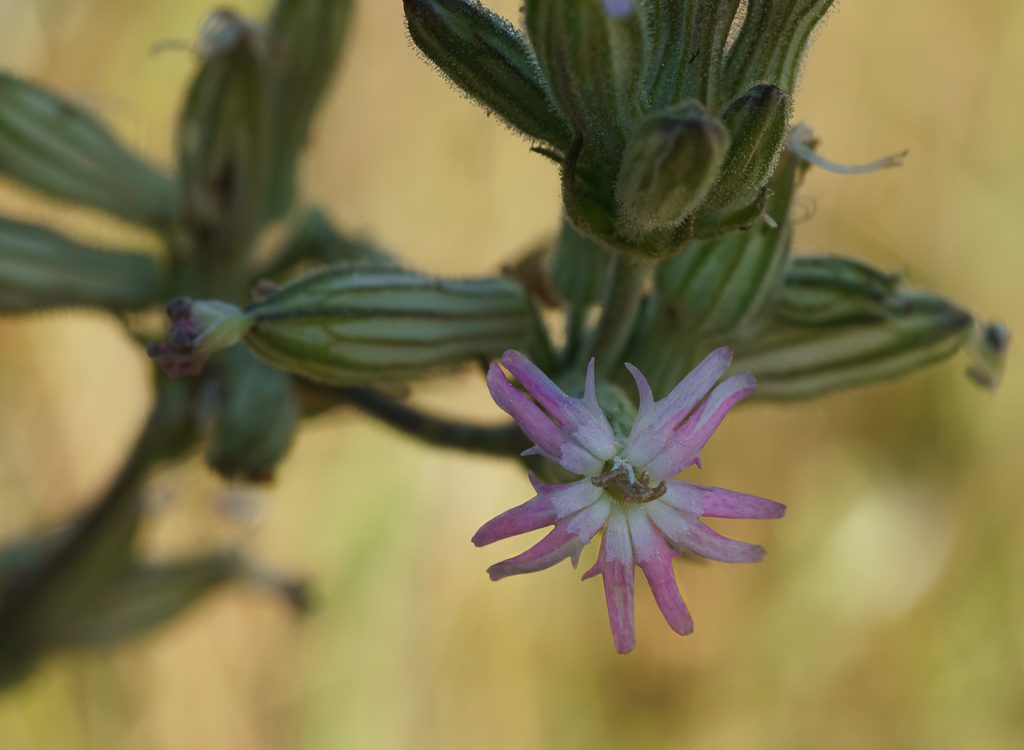 A close-up of the blossoms of Scouler’s Catchfly, Photo by Dennis Plank

Of the earlier plants, Showy Fleabane is still in bloom here and there, though it’s starting to look pretty ragged. The Harebell is still blooming, though in lesser numbers and it will continue well into the fall. On well vegetated mounds, one can still find the prairie violet, Viola adunca, blooming as well.

Among the non-natives, even the Oxeye Daisy and the St. John’s Wort have almost finished, but a new and unwelcome star has risen above the prairie and that is Tansy Ragwort. Like many plants this year, native and non-native, this one has done extremely well. The last few years there wasn’t much of it, but this year t is very abundant. But more on this plant in a later post. Hairy Cat’s Ear, Hypochaeris radicata, is also still blooming and never seems to stop, though I know it will by fall. 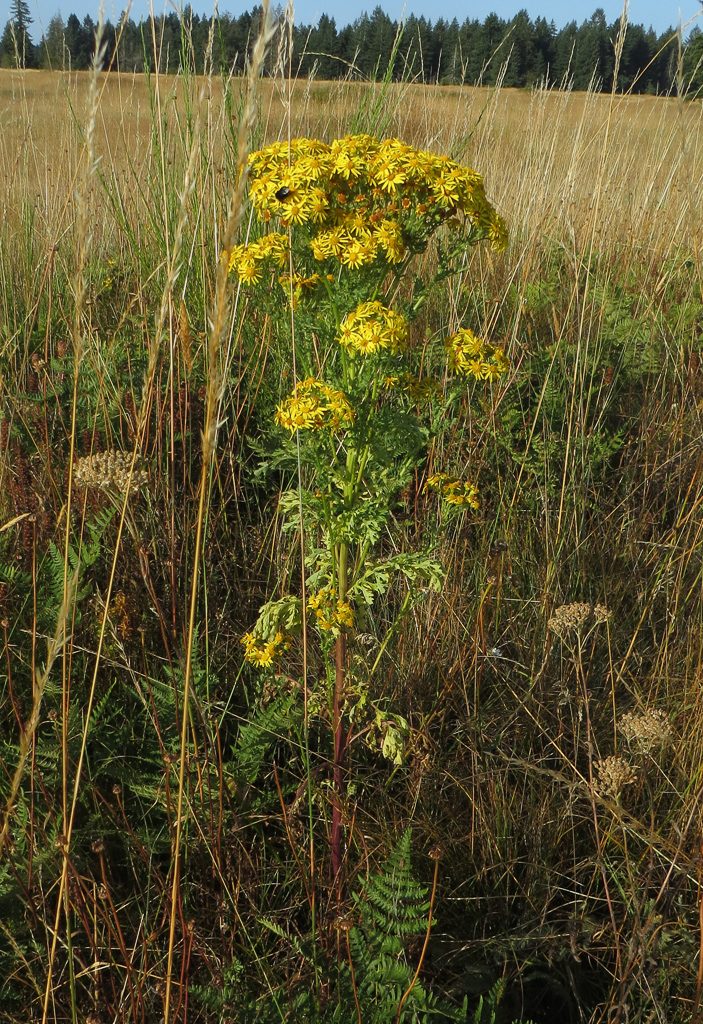 The birds are pretty much done making babies for this year. Now it’s time for them to learn how to be adults. In my last few visits to Glacial Heritage, I’ve seen hundreds of swallows on the power lines and fences along the entrance road, a flock of 10 Western Meadowlarks (probably the offspring of a single male and his two mates), and a flock of six American Kestrels-again probably a family group. Around our own property, the Western Bluebirds have fledged their second crop of youngsters with the help of some of the first brood and now have them secreted somewhere until they’re old enough to bring back (probably within the week). They have been known to raise three broods, and that’s a possibility this year as the relatively wet spring produced a lot of foliage and that’s been followed by lots of grasshoppers which make excellent Bluebird food. We have a large number of juvenile American Goldfinches coming to the feeders. They learn to feed themselves quickly, but until they do they have a plaintive cry that is easily rendered as “feed me”. Usually, they raise two sets of young in a season, with the male taking over rearing after the first batch fledges and the female taking up with another male (usually an inexperienced first year bird) for the second crop. We saw a female feeding young today, which is a good sign that the second crop of this species is starting to fledge. 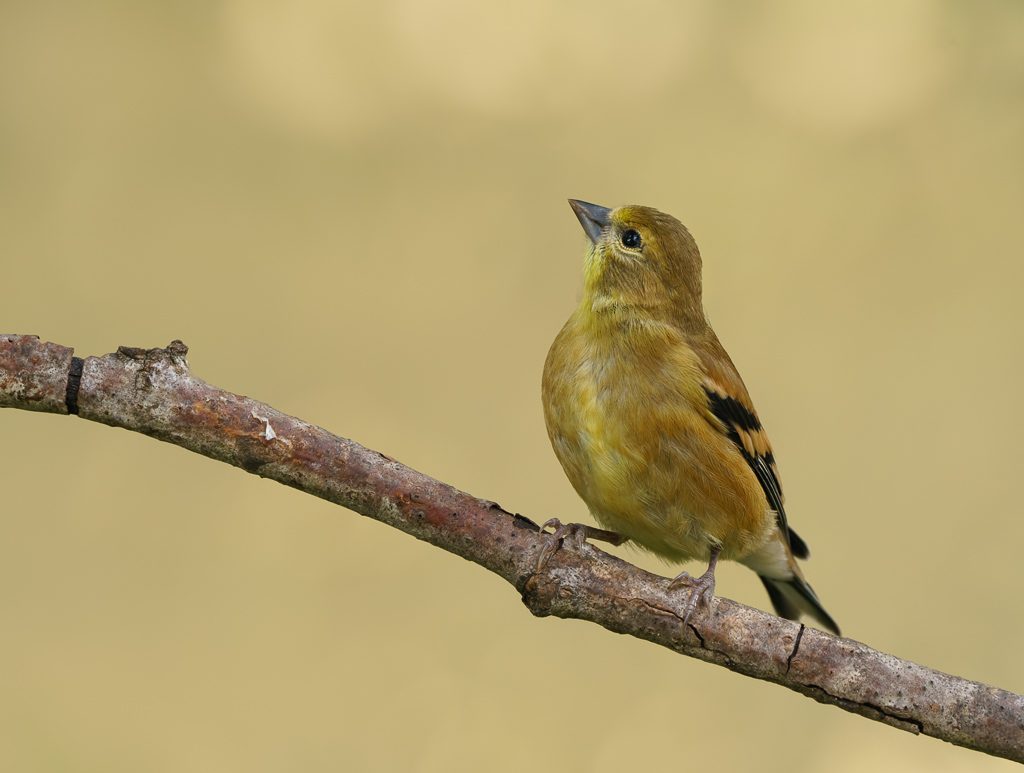 Another sure sign of this time of summer is that the Yellowjackets are starting to make their presence felt. I was digging out Tansy on Glacial Heritage recently and ran afoul of a nest, so keep your ears open for them.