Michelle Blanchard is a long time prairie volunteer and self-described “muddy boots biologist”.  She learned her bird banding at Ft. Hood in Texas where she volunteered with The Nature Conservancy on a very successful Golden-cheeked Warbler recovery program.

I was out at Glacial Heritage pulling Scotch Broom and enjoying the wonderful flowers on June 2nd this year. Meadowlarks were singing from all sides and the females were giving their “telephone” calls, when suddenly the air seemed filled with male Meadowlarks chasing one another around the area and singing at the top of their lungs. While it was actually only four or five birds, it was an amazing experience. Even more amazing, a short while later, I heard a male singing in a very different way. It was soft and a bit more melodious and the song went on and on. I told Michelle about it and she thinks it’s the male just singing to its mates telling them that he’s there and all’s right in the meadowlarks world. I thought then that it was so wonderful that we were able to restore a place where Meadowlarks can sing. It made me very happy to have Michelle write this post.

P.S. It’s about as hard to photograph these birds as it is to trap them, so the images in this post are from a variety of locations where I got lucky.

If there is an iconic bird of the prairie, it can only be the Western Meadowlark. 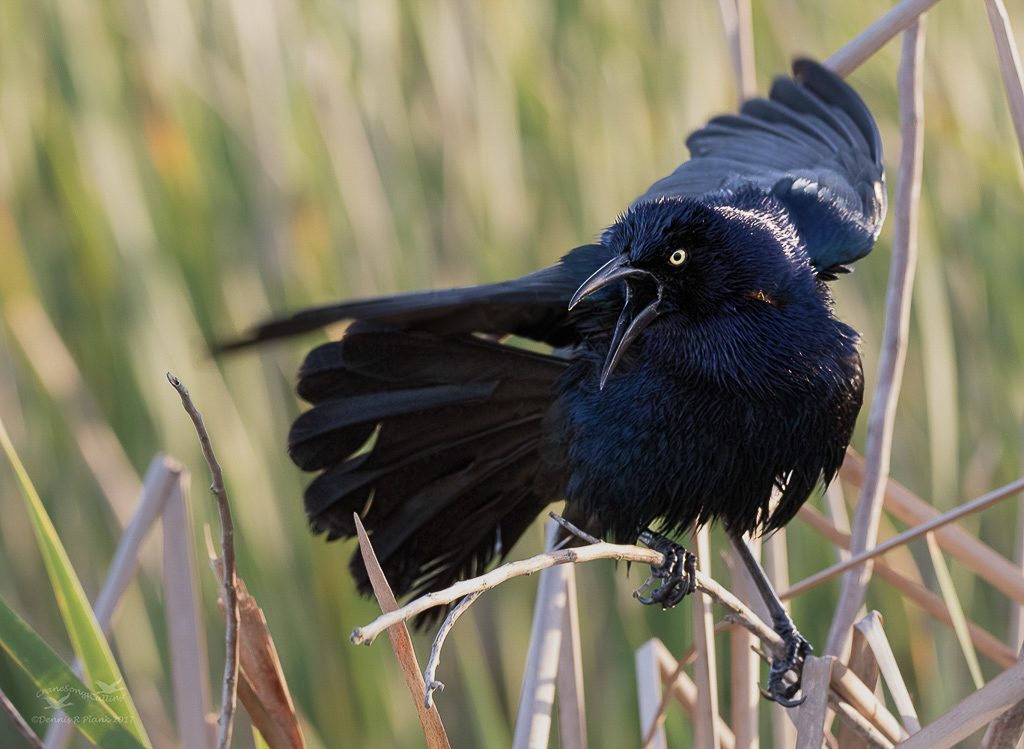 Great-tailed Grackle from the Texas Coast, Photo by Dennis Plank 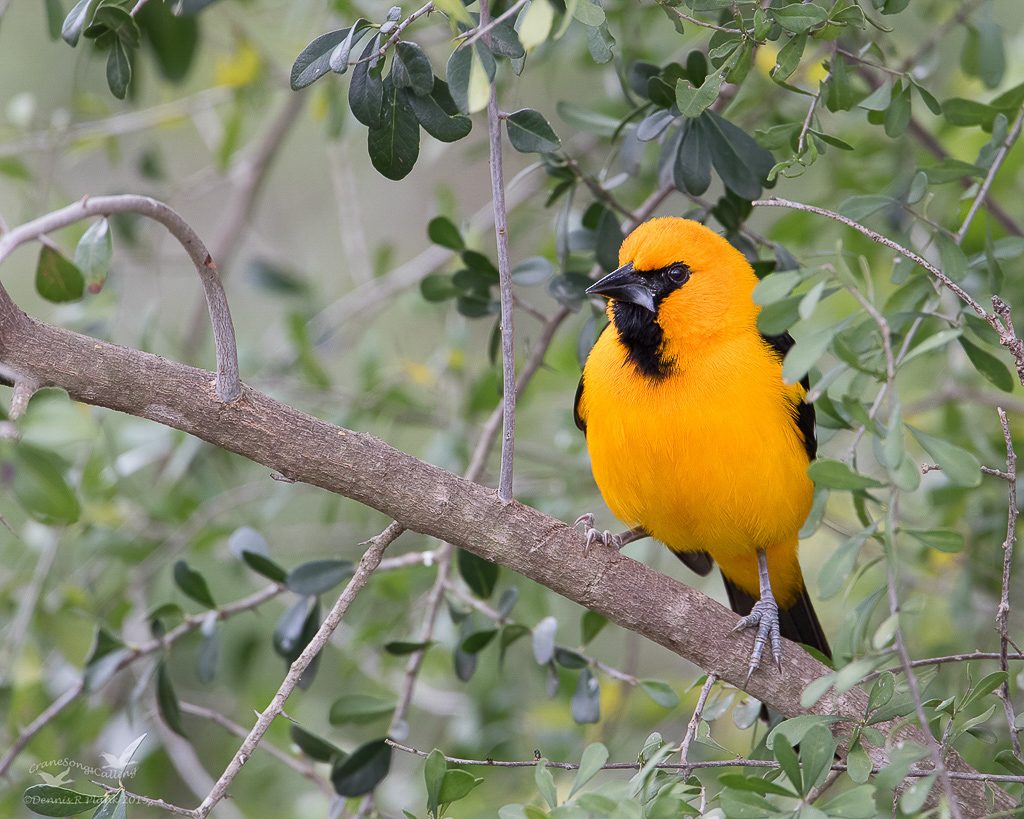 Altamira Oriole from the Rio Grande border of Texas, photo by Dennis Plank

Most-not all, (for the orioles are icterids, too) icterids are somberly clad in blacks and browns. The meadowlarks, though, have a brilliant yellow breast, emblazoned with a black chevron at the base of the throat. If that weren’t enough, they are singers, too, something icterids are not known for. 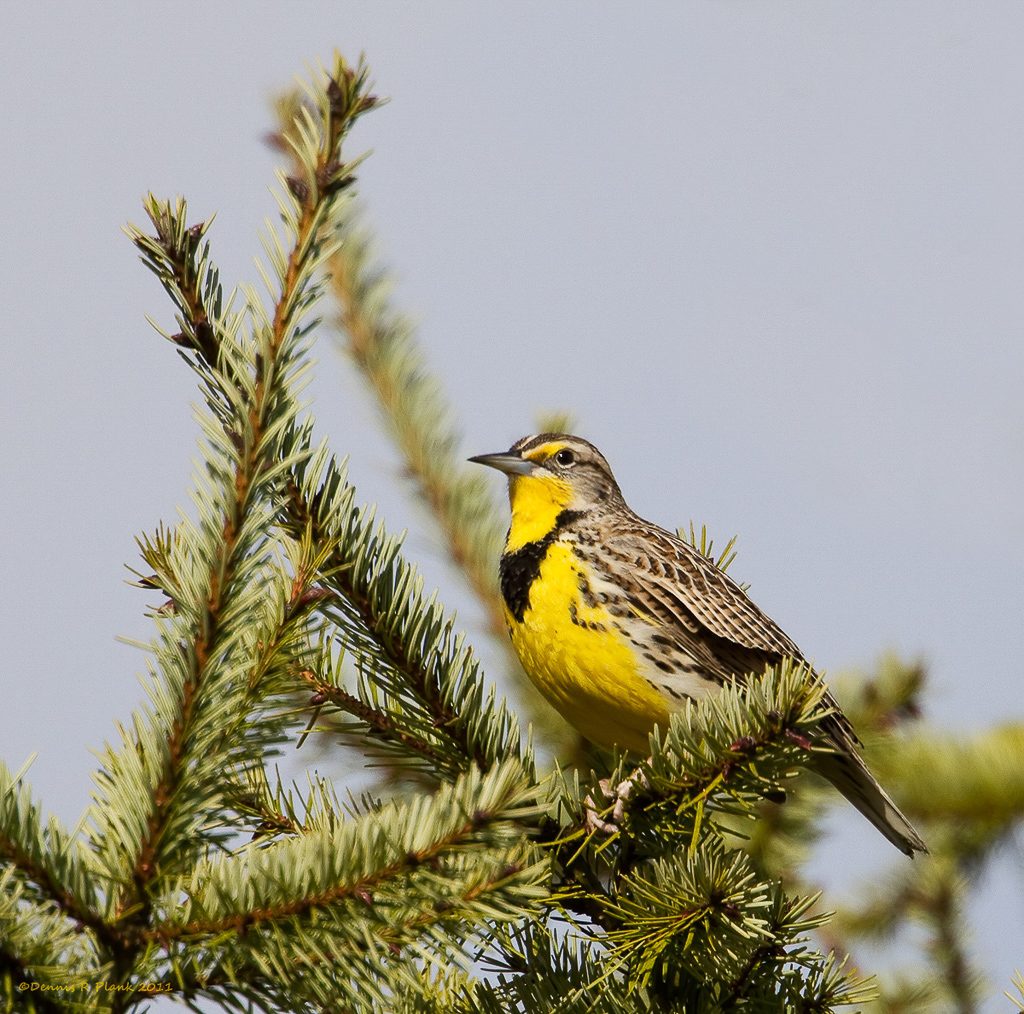 Our Western meadowlark is almost indistinguishable from the Eastern meadowlark, but the moment you hear the two sing, you know that the Western is by far the better singer. Here are the clips from the CD accompanying “Stokes Field Guide to the Birds of North America”, Little, Brown and Company, 2010.

As well, the Western is much fussier about his habitat. All meadowlarks are obligate grassland species, but the Western demands just the right height of grass-not too tall and not too short. It’s why you’ll never see a meadowlark on a golf course.

I was stationed at Ft. Lewis in the late 80’s and early 90’s. Being that my specialty was tanks, I spent a great deal of time in ‘the field’ and often heard meadowlarks. I began to appreciate them for their singing. Eastern Meadowlarks have only one or two songs. Westerns have a much larger repertoire of several songs, the number increasing with age and dominance.

I began volunteering on Glacial Heritage in the late 90’s. Considering its size, it was worrisome and depressing that I counted only three singing males on all of Glacial. 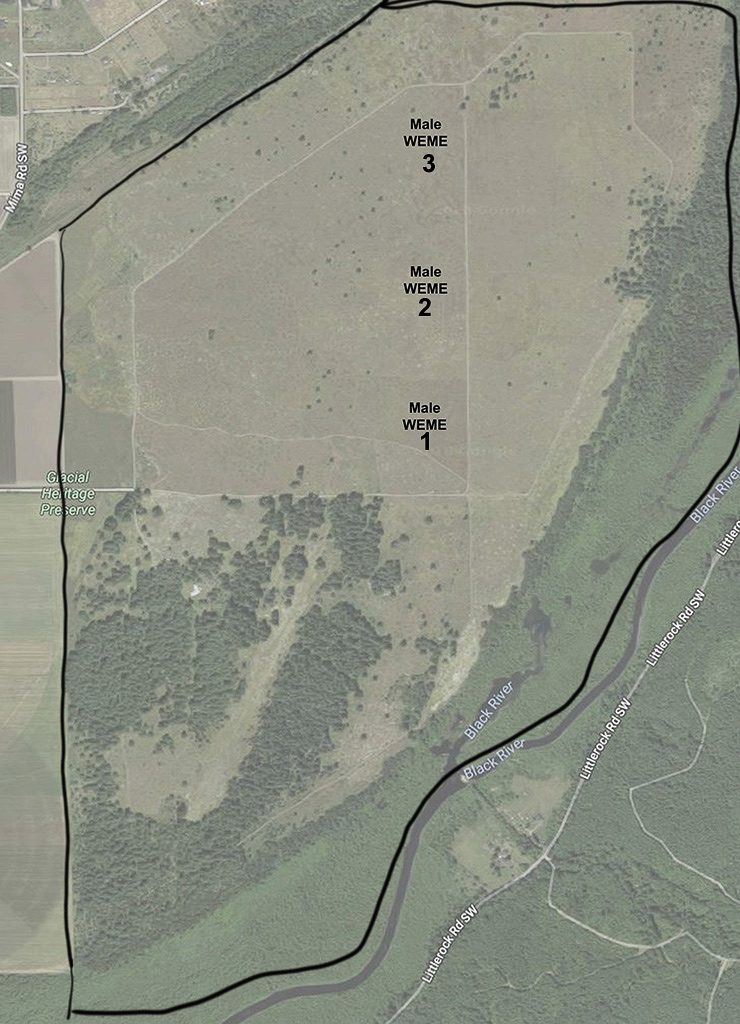 This I attributed to the fact that GH, at the time, was a vast expanse of Scotch broom and Douglas firs. In a treeless prairie, meadowlarks will sing on the ground, but Glacial Heritage had plenty of invasive Douglas firs from the tops of which they’d sing. Their territories were small due to very little suitable grassland, not enough to support any sizable population of meadowlarks. It appeared that the tiny resident population was hanging on by a thread. In fact, I was showing a person around the preserve one time, and one of the three males sang. I said, ‘Oh, there’s one of my meadowlarks.” Her voice dripping scorn, she said, “No, it’s not, there’s no meadowlarks west of the Cascades.”

Oh. I guess I have a really vivid imagination. 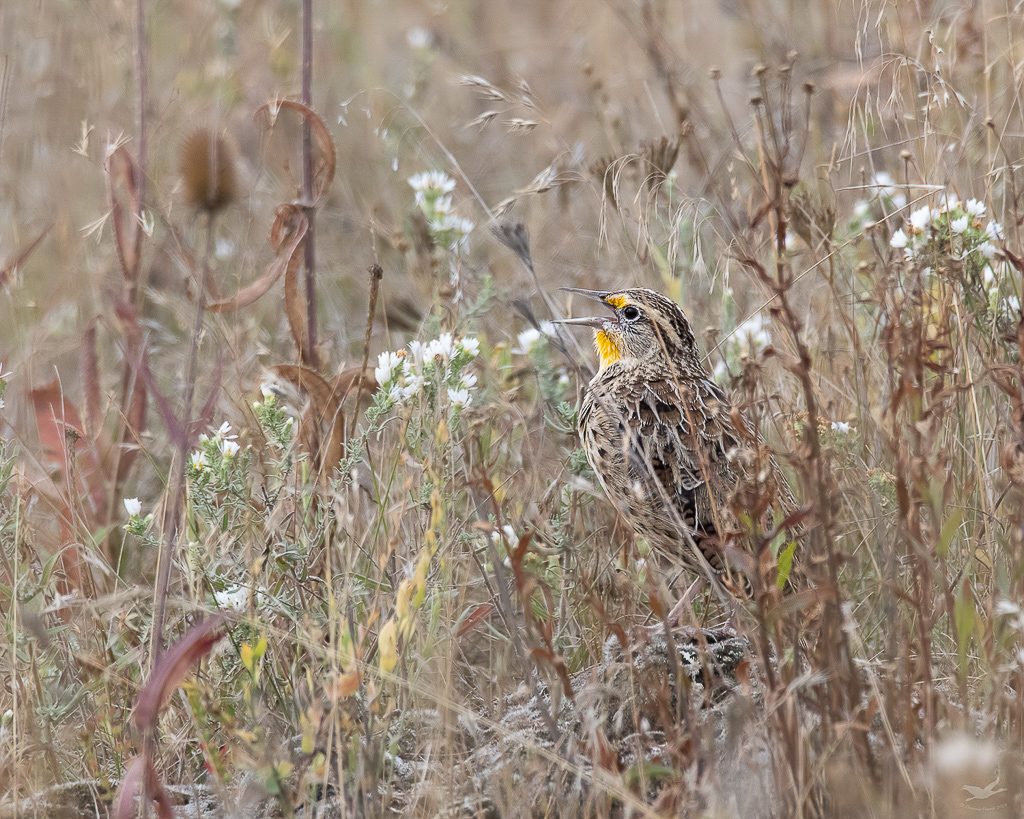 Western Meadowlark singing from the ground. Photo taken at the National Bison Range in Montana by Dennis Plank

The more I learned about them, the more I grew enamored with meadowlarks.

I mapped out where the meadowlarks were, and got to know them by their songs. I learned to tell who each male was by where and what he was singing. They impressed me with their intelligence. But, alas for this birder, they’re highly suspicious of humans. If she knows her nest has been discovered, the female will abandon it immediately. Meadowlarks are unwilling to tolerate close human proximity or even observation. One time I had my binoculars focused on a female that was perched atop a small shrub. She held a wriggling grasshopper, telling me she was feeding hatchlings. Would she show me where her nest was? It became a grueling duel-my increasingly tiring arms, and her refusal to move an inch while under my observation. Finally, after an eternity, I blinked-and she was gone.

What would happen, I wondered, when we had Glacial at least partially restored to open grassland? Would the meadowlarks respond? Would they be able to survive the lengthy time it would take to restore Glacial?

I had to know.

I possess a Master Bander’s Permit. I developed a research plan to identify individual meadowlarks and applied to the Bird Banding Lab for a string of bands for Western Meadowlarks. Florence Sohenlien, the BBL’s band manager at the time, approved my study and sent me a string with the warning: “You’re the fourth person I’ve sent this string of meadowlark bands to. It’s never been broached. Good luck.” 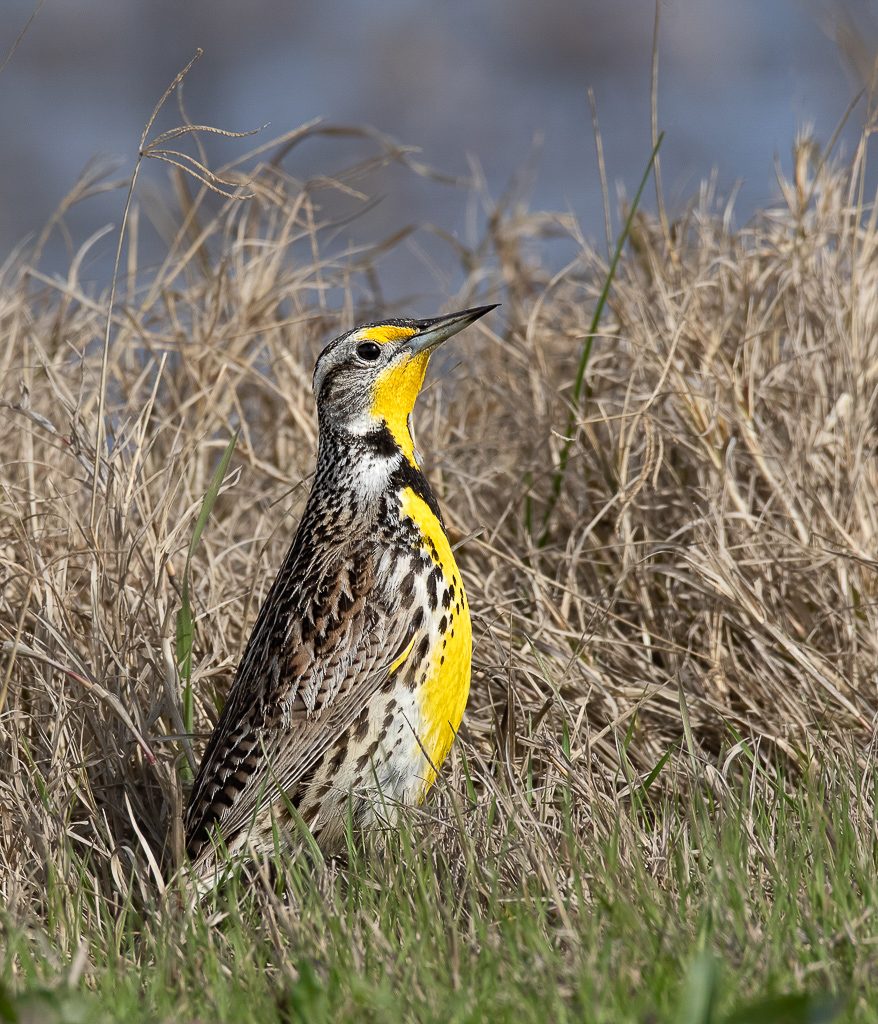 She was right. My approval to band Western Meadowlarks was for three years. In those three years, I got up before dawn to set up nets. I deployed walk-in traps, baited with live grasshoppers. I created and painted a meadowlark decoy out of Play Dough. It was hideously ugly but I hoped the birds wouldn’t mind. I bought (at nosebleed prices from Cornell) a CD of W. Meadowlark calls, along with the game caller to play it. I’d set up my nets in areas I knew males held as territory, and would hear them warning their mates of my presence.

The resident male always responded to the CD. He’d swoop in, looking for the brazen interloper singing on HIS territory. He’d perch on the net poles and sing. Walk the top panel of the net like a tightrope, looking, looking. He’d stand atop the walk-in trap. Circle overhead, sounding his battle cry, daring the intruder to come out from hiding (or was he mocking the decoy, saying, gads, you’re ugly!) But actually fly into my nets? Or to take the bait in the traps? Nope. Not once. Not in three years.

What was I doing wrong? Was it my method? My set up? I contacted every bander in the US and Canada who had banded meadowlarks and asked, how did you catch them? Was it your net configuration? CD calls? Traps, bait, time of day? The answer was always “dumb luck”. I didn’t have luck of any level, dumb or smart. I returned the string of bands after three years, not once ever having been broached. 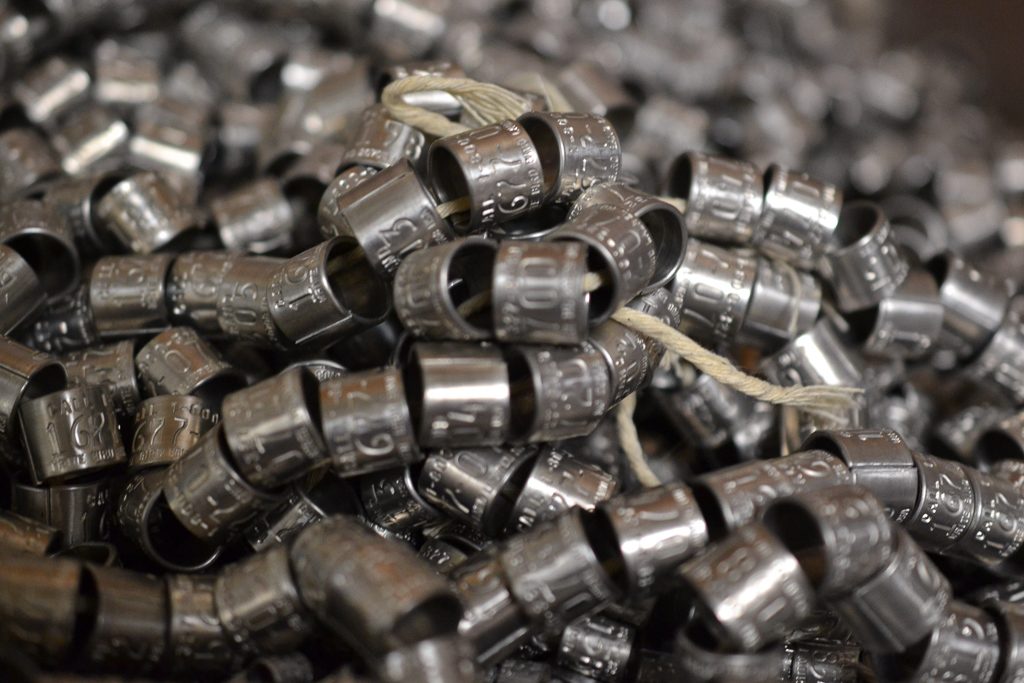 Federal bird bands managed and distributed by Craig “Tut” Tuthill, Photo taken Thursday, September 14, 2017. Unidentified Photographer. He didn’t have to return them all.

However, despite my never banding a meadowlark, I can say that my theory was proven correct. With the restoration of their preferred habitat, especially through controlled burns, by removing scotch broom and trees, the population of meadowlarks has grown. I can no longer count how many males I hear singing because they’re everywhere. In the spring and summer, the prairie rings to their songs. In the fall and winter, you’ll see them in large flocks, arrowing over their beloved grassland.

Glacial Heritage’s prairie icon has returned. And he likes what he sees.

Glacial Heritage panorama taken from the northwestern edge of the WEME 3 territory on May 9th, 2020. Photo by Dennis Plank