Another good find from Gail Trotter for those who want to make their property more wildlife friendly.

Are you interested in creating habitat for wildlife? Do you want to do your part to keep Thurston County wild? Now is your chance to become a Habitat Steward.

The National Wildlife Federation is offering a specialized, multi-week online workshop to teach you how to help others create and restore wildlife habitat in backyards, schoolyards, and other private and public areas. Workshop sessions will take place the first four Tuesdays in June from 6:00 – 9:00 pm via Zoom.

During this online workshop, you get to meet and interact with local conservation professionals and other similarly interested folks while participating in this engaging, fun and highly informative training! Expert speakers from the community will present on topics such as: gardening for wildlife, improving water quality, managing noxious weeds, prairie restoration, and more!

The cost of the training is $25 to cover program materials. Note: scholarships are available! No one will be turned down due to lack of funds. To register for the training, please visit: http://thurstonhst.brownpapertickets.com or contact us at WAEducation@nwf.org or (206) 577-7816.

On the late spring bloom front, the star of the show has to be Oregon Sunshine, Eriophyllum lanatum, with that lovely silvery blue-green foliage and the prolific yellow daisy-like flowers. It’s just getting started now and the nice weather this week has produced a few larger patches of bloom.  For this I preferred to concentrate on the simplicity of a single bloom. 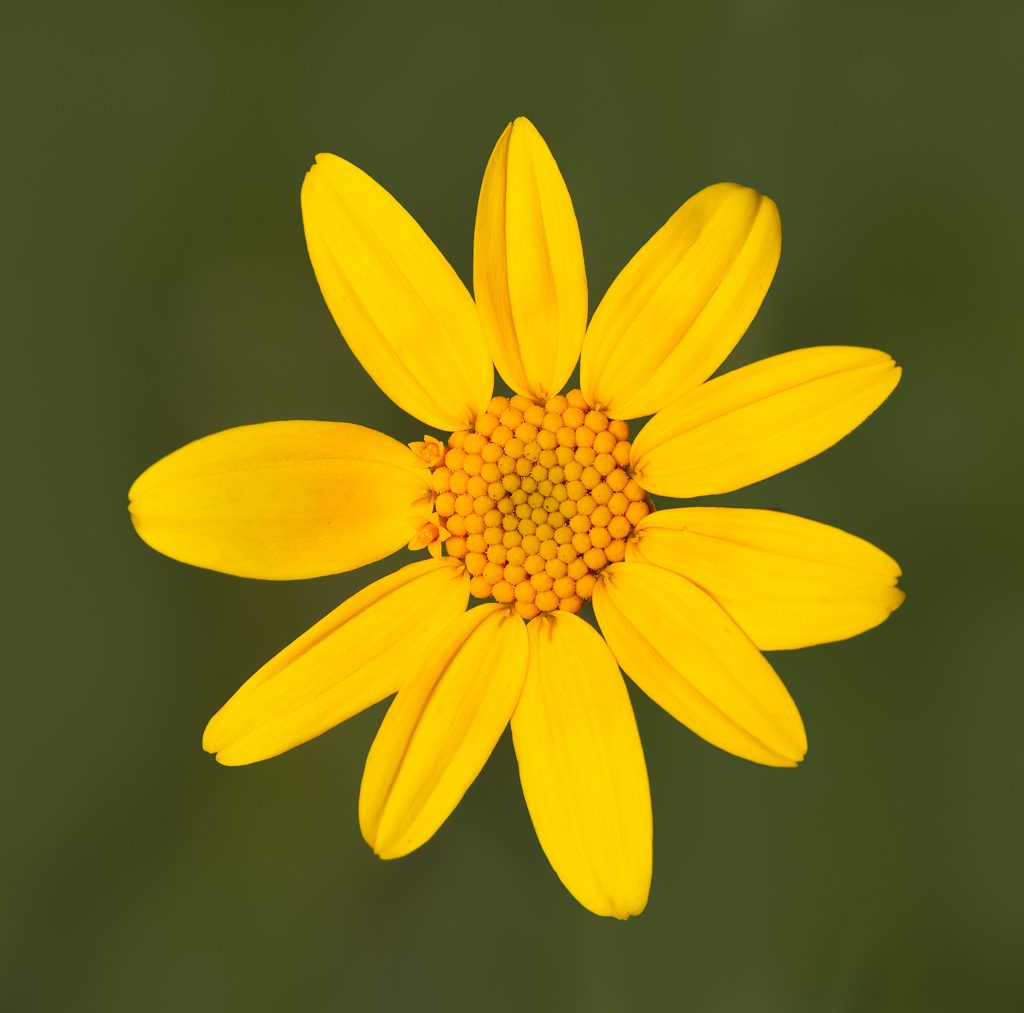 Another favorite yellow composite that is just barely getting started is Cutleaf Microseris, Microseris laciniata. I like this plant in its immediate pre-bloom stage almost as much as when it’s in bloom. The large buds on their long stems bend down in an elegant curve against the beautifully cut basal leaves. In bloom, they look somewhat like an over sized dandelion until you look closely and see the difference in petal structure. As of yesterday, I had only found two that had started to open and both had another couple of days to reach the fully opened condition. 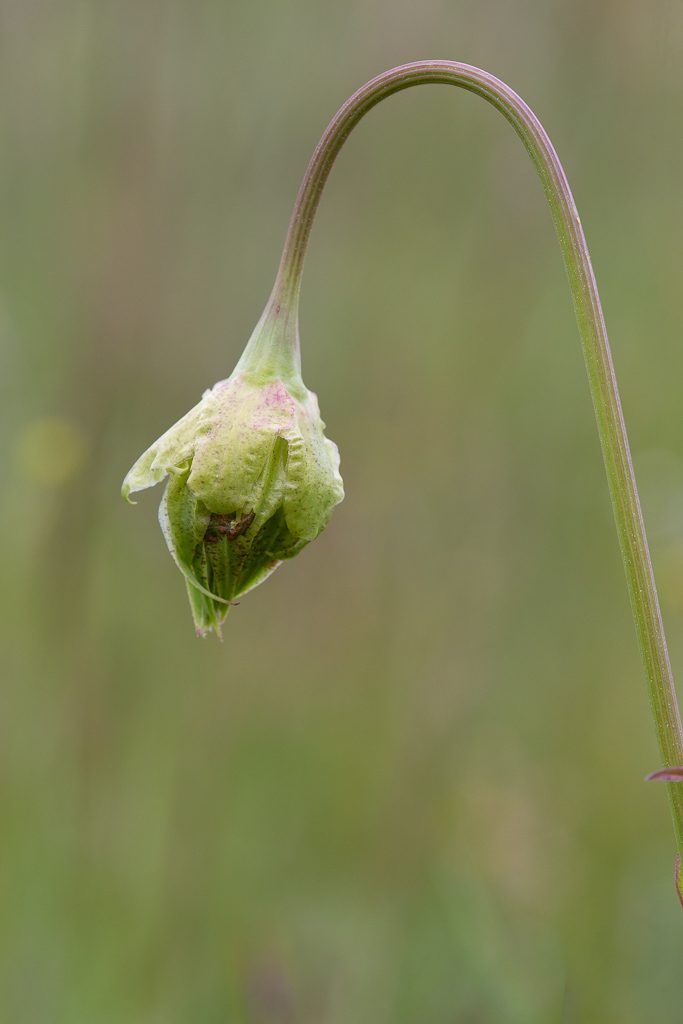 Speaking of composites, though they aren’t welcome from an ecological perspective, it is very difficult to miss the Oxeye Daisy, Leucanthemum vulgare beginning to whiten the Mima Mounds or the Hairy Cat’s Ear, Hypochaeris radicata imitating dandelions all over the prairie.

The daisies seem to grow best on the mounds themselves and I have encountered them in such concentrations when trying to get at Tansy Ragwort that I’ve nearly denuded the mound to get at the weed of most concern. I have to admit that there’s a bit of love/hate relationship with this species as it is a handsome flower with attractive foliage. The other morning, after a heavy dew, the love part came to the forefront. 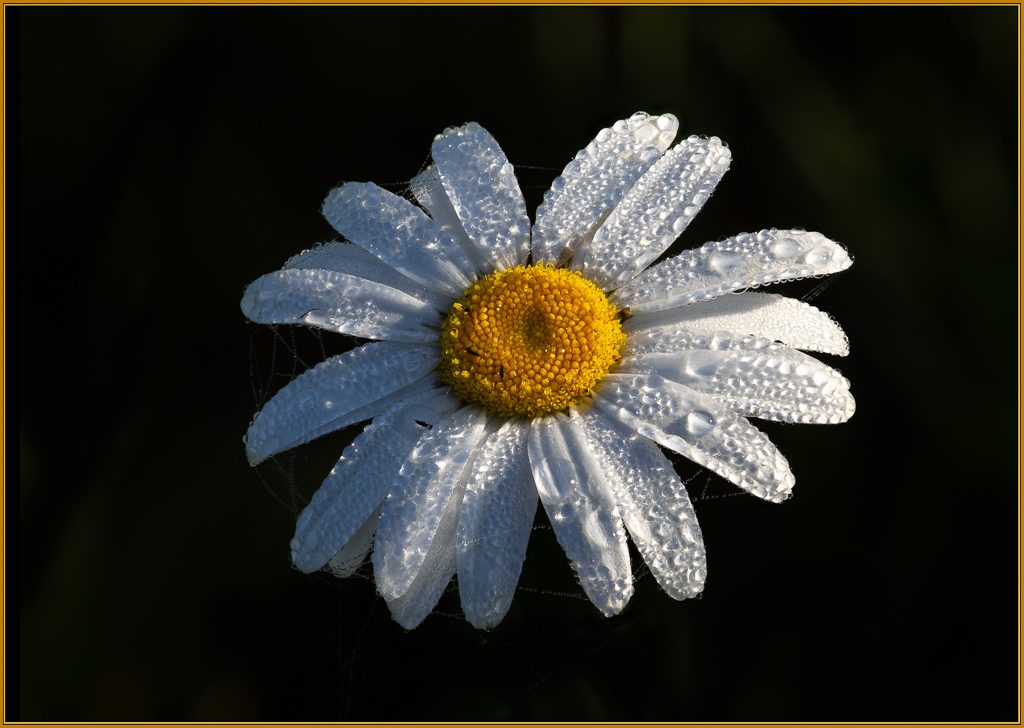 The Hairy Cat’s Ear is also known as Flat Weed from the habit of the leaves to grow flat against the ground. It has two amazingly effective habits for proliferation. It continues to send up new bloom stalks all summer no matter how many times they’re removed and in any reasonably mild fire, the blooms seem to mature seed heads overnight without the need for external pollination. I recall a burn on Glacial heritage where that happened and the post-burn treatment couldn’t be done due to weather conditions. The whole burn became a sea of this weed until the next time it could be burned under better conditions. 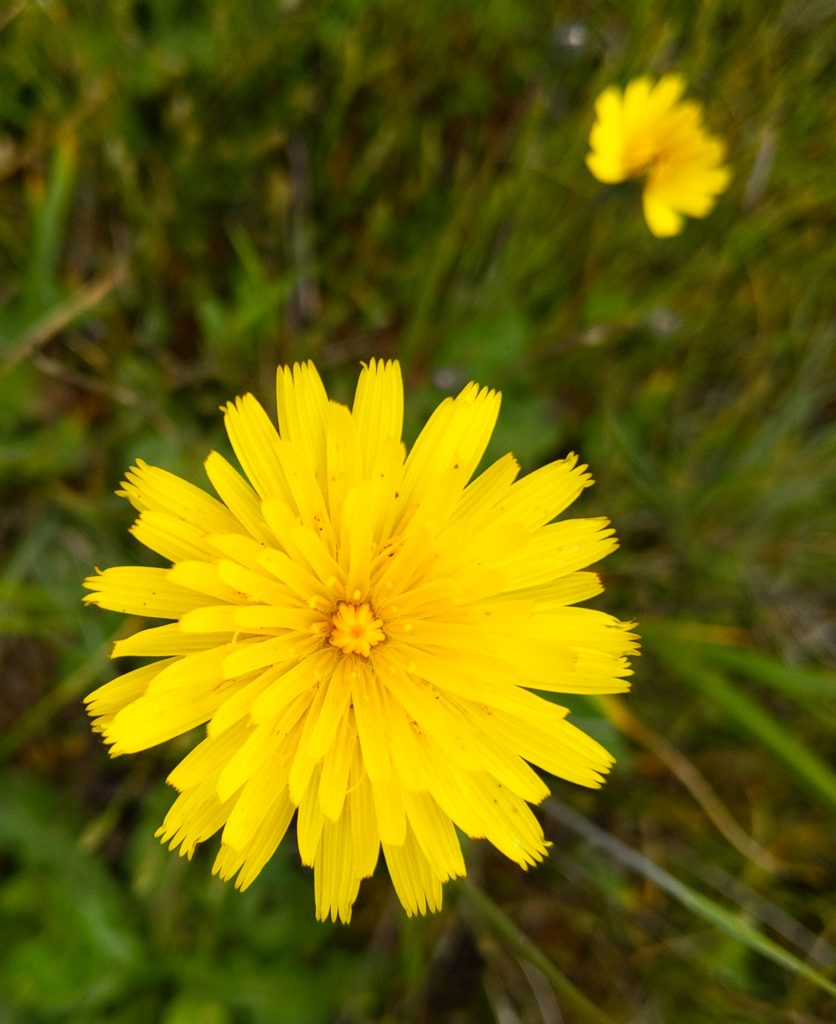 Leaving the Composites, the next lupine in line, and to me the most obviously beautiful of our locals, the Prairie Lupine, Lupinus lepidus, is in full bloom. While far from the exuberantly enormous blooms of some species, I like the relatively delicate structures of the leaves and conical bloom heads and the color of the individual blooms is beautiful. 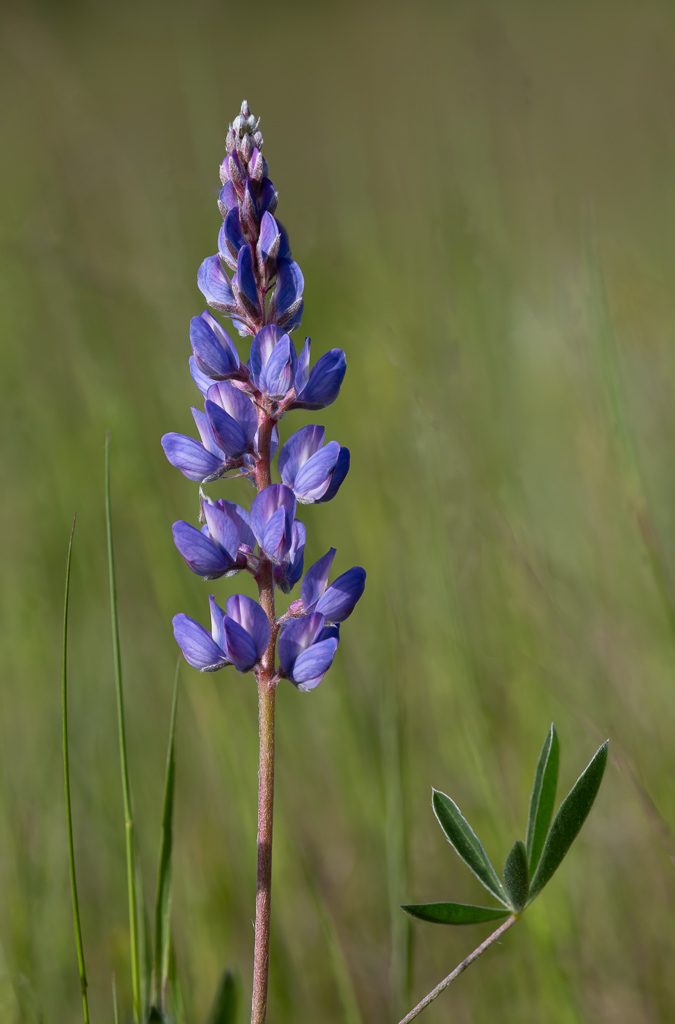 Ivy’s post “Faded Prairies Renewed” contained a flower that I had not encountered previously, and I was astounded to find it on our property where I had sown some prairie annual seeds that couldn’t be used in conservation areas. It’s the entrancingly lovely little Baby Stars, Leptosiphon minimus. Luckily these are so tiny that they’re pretty much out of the wind and it was possible to photograph them, though DSLRs aren’t really designed well for getting that low to the ground and still operating them easily. 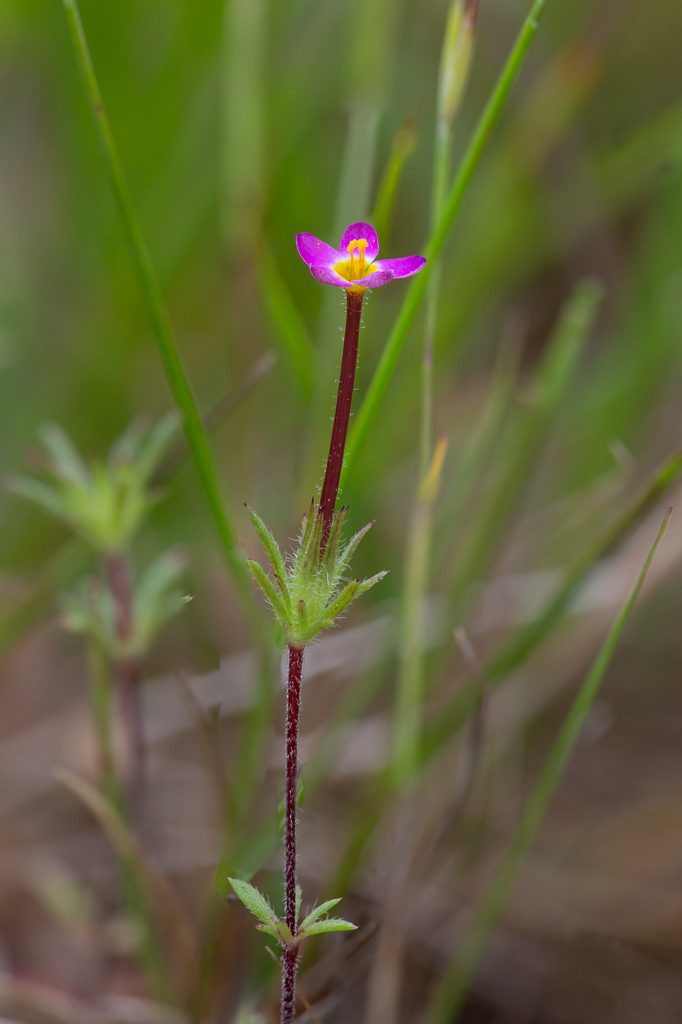 Sea Blush or Rosy Plectrities, Plectritis congesta, is in bloom now as well and is forming large patches in places on some of the prairies. It’s a welcome splash of a different color. 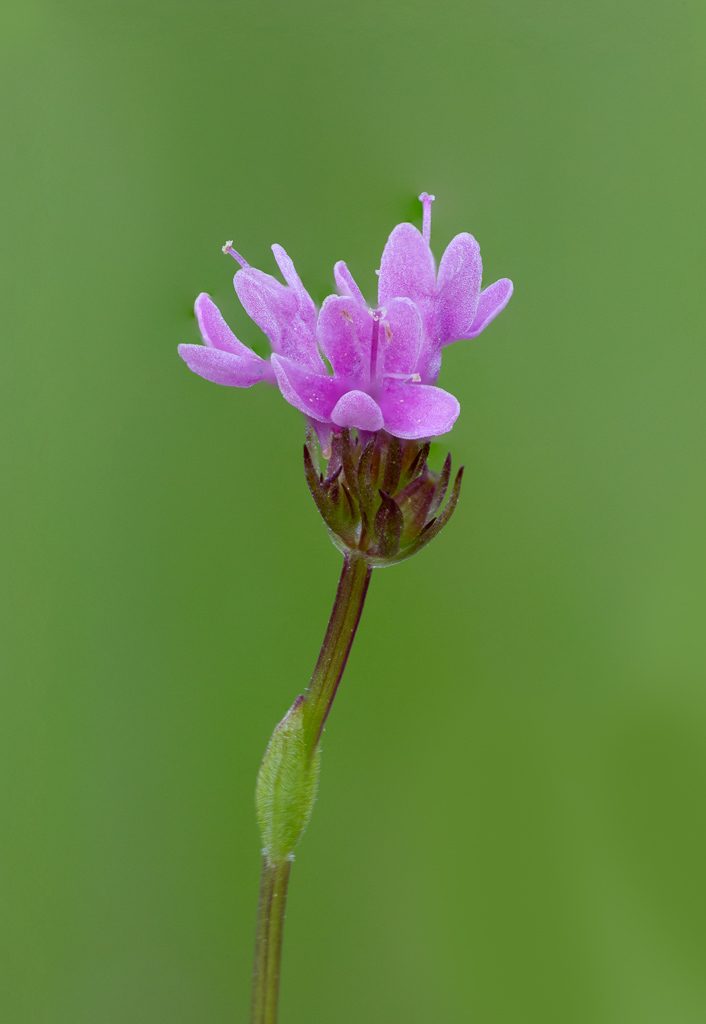 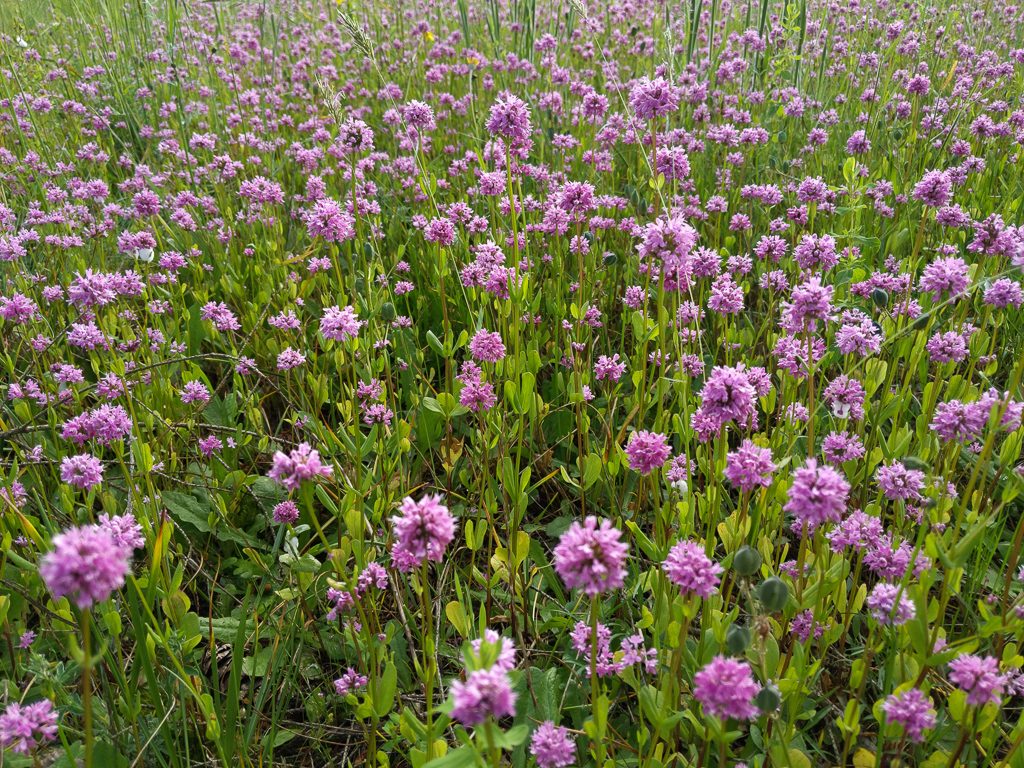 A patch of Sea blush,Photo by Dennis Plank

The last of the flowers for this week is the first Harebell, Campanula rotundifolia, of the year. Though my wife doesn’t find this flower attractive, I love it. The blue (or rarely white) bells on the very thin stems dance in the prairie breezes all summer and even into early winter. I don’t know if this one bloomed early because of the spit bug or if it was just a favored plant, but I was happy to see it regardless of why it was out. Late note:  I’m seeing more open since I wrote the draft of this post. 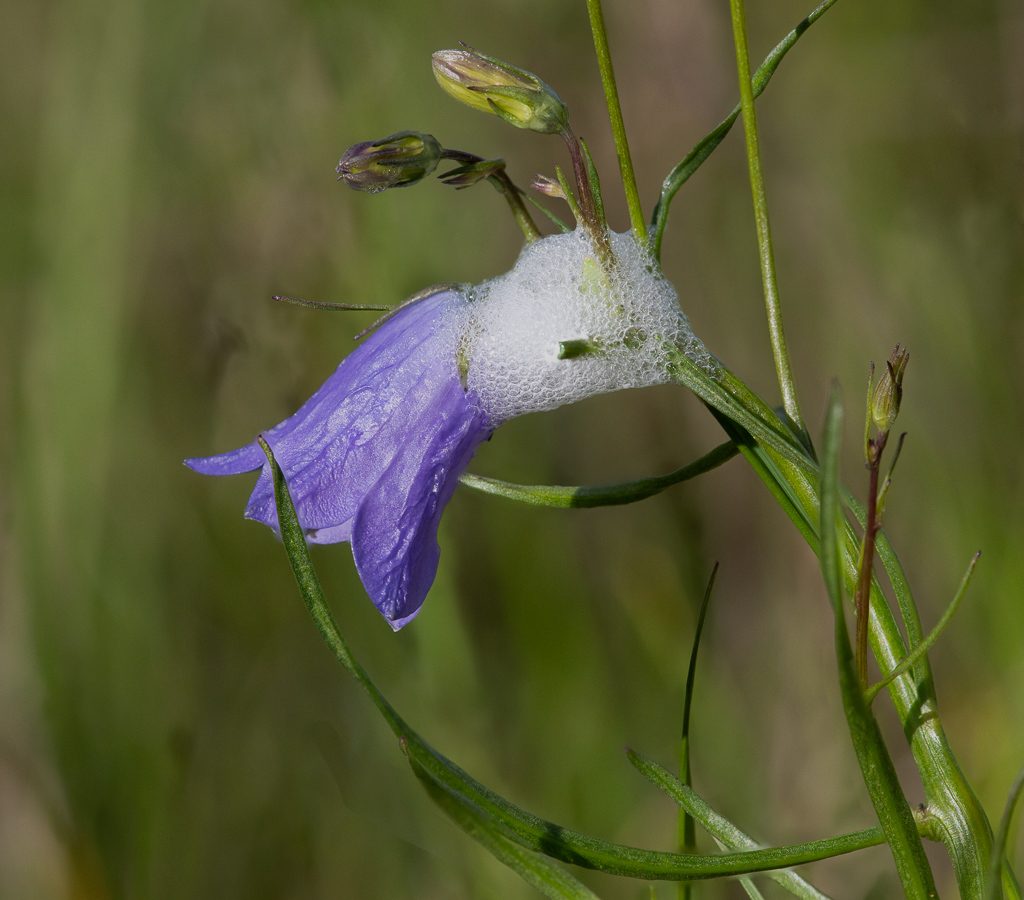