Scatter Creek South, 7 May 2020, post and photos by Dennis Plank

I paid a quicker than desirable visit to Scatter Creek yesterday morning and chose the south unit as I’m more familiar with it. Leaving the parking area, I turned right toward the creek. The first path down toward the creek is carpeted with vines having large blue flowers. These are left over from the original residents and are ornamental Vincas. In the past, that would have been more obvious, but the house and barn were burnt down in the Scatter Creek wild fire a few years ago and most of the remnants have been removed. 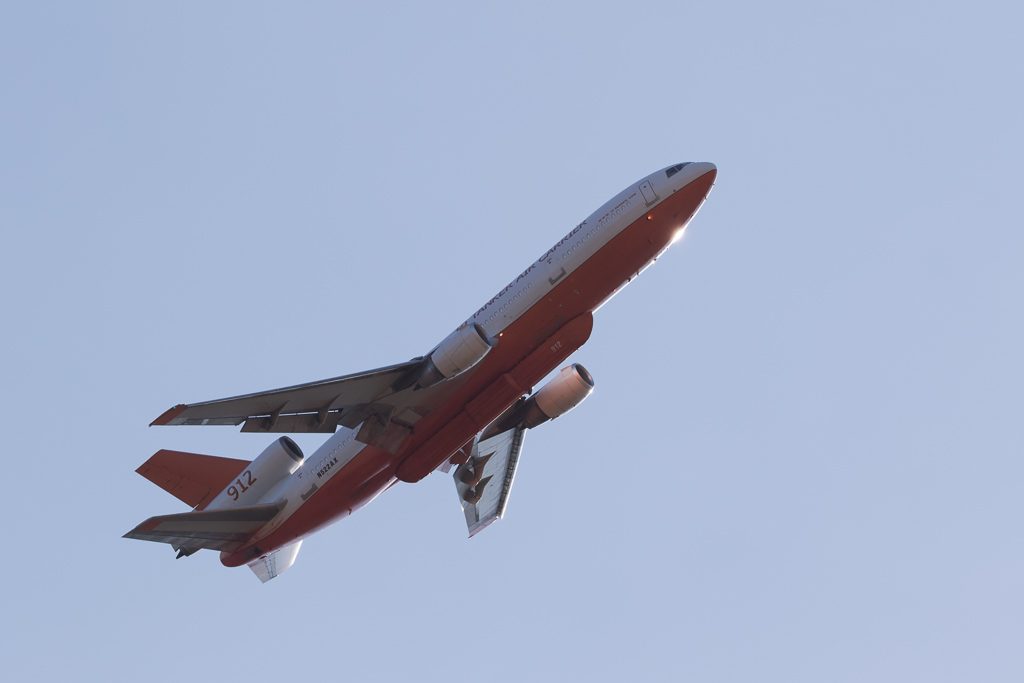 The Fire Tanker on the Scatter Creek Fire turning around over our property, photo by Dennis Plank

Proceeding along the track that parallels the creek, the first thing that came to my attention was the Giant Camas, Camassia leichtlinii, that grows profusely in this area. At first I wasn’t sure whether it was truly the Giant Camas or whether it was just the relatively rich, well watered soil in the area, but I was soon convinced as the bud structure is considerably different. 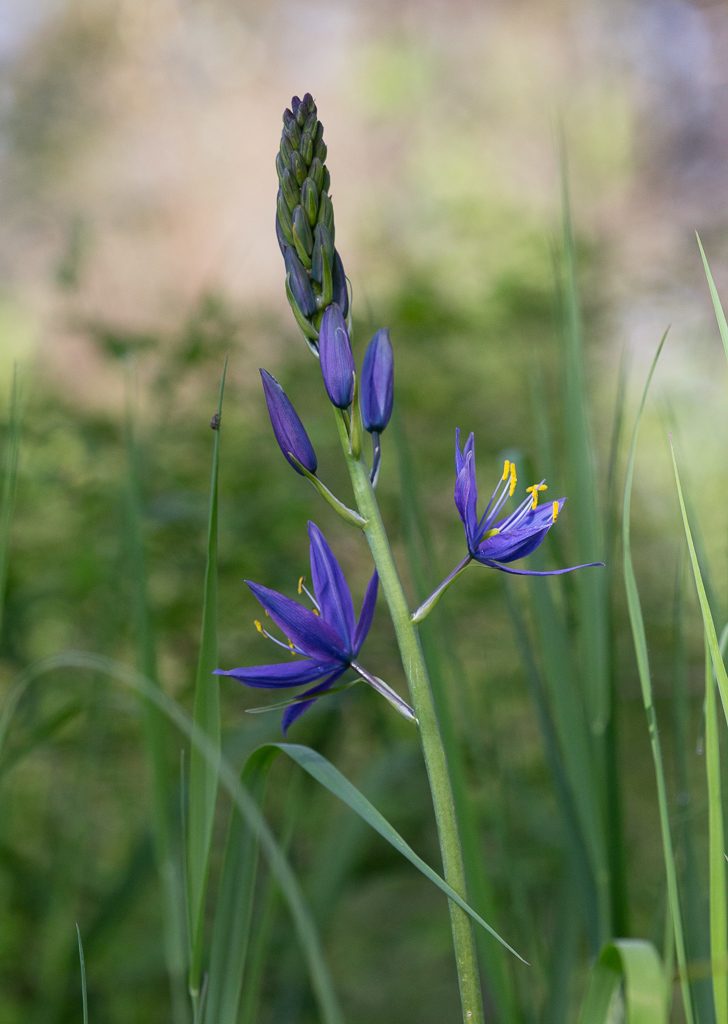 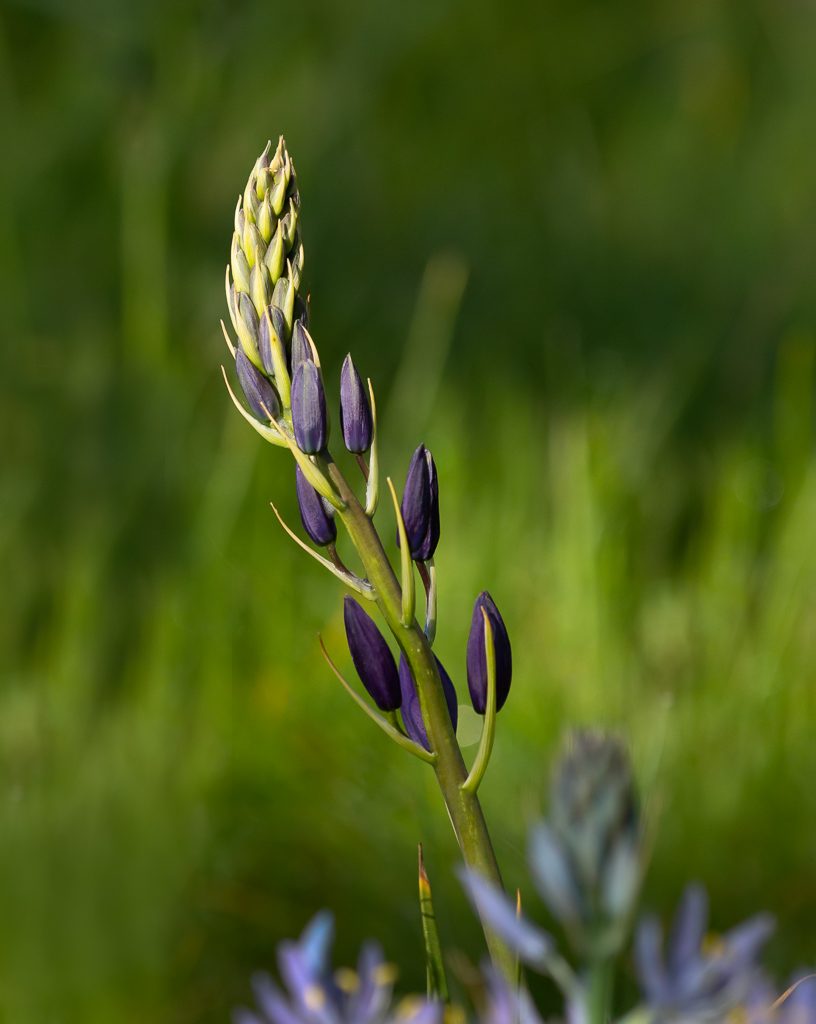 There were several Serviceberry (Amelanchier), also known as shadbush, shadwood or shadblow, serviceberry or sarvisberry, juneberry, saskatoon, sugarplum, wild-plum or chuckley pear-take your choice, along the track. The blossom clusters on this plant look so disheveled, but on closer inspection can be seen to be made up of a tightly bunched group of rather simple flowers with the long thin petals giving them their odd look. 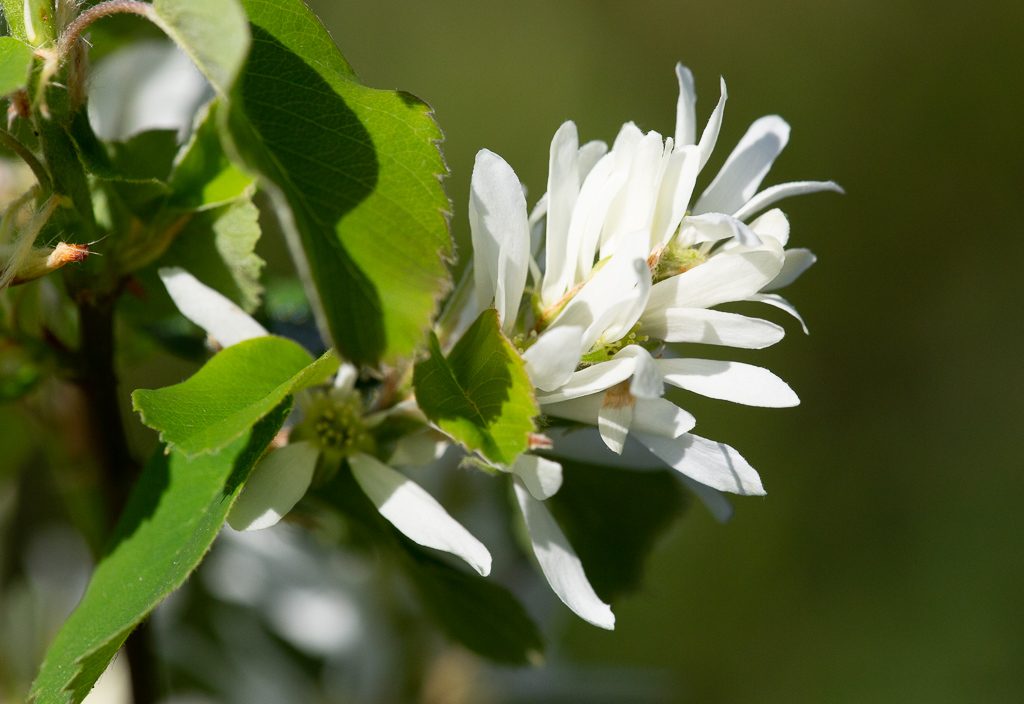 Once the track left the immediate vicinity of the creek, the spring flowers started appearing in clusters-how many of them from the post fire planting and how many were there before, it was difficult to tell. The violets (Viola adunca) were abundant and scattered, so I’d guess they were there before the fire. 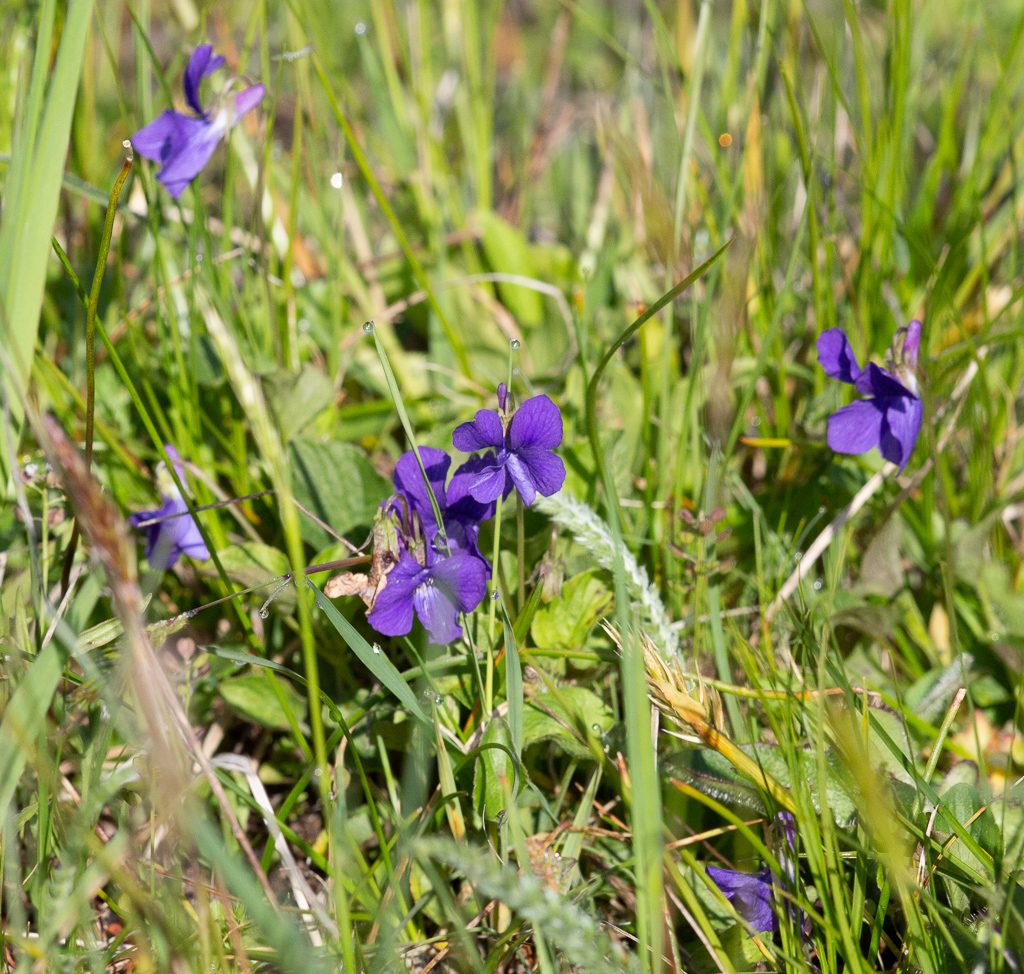 However, I suspect the Collinsia and field chickweed (Cerastium) were seeded after the fire. It looked like someone got rather liberal with the former in this location. 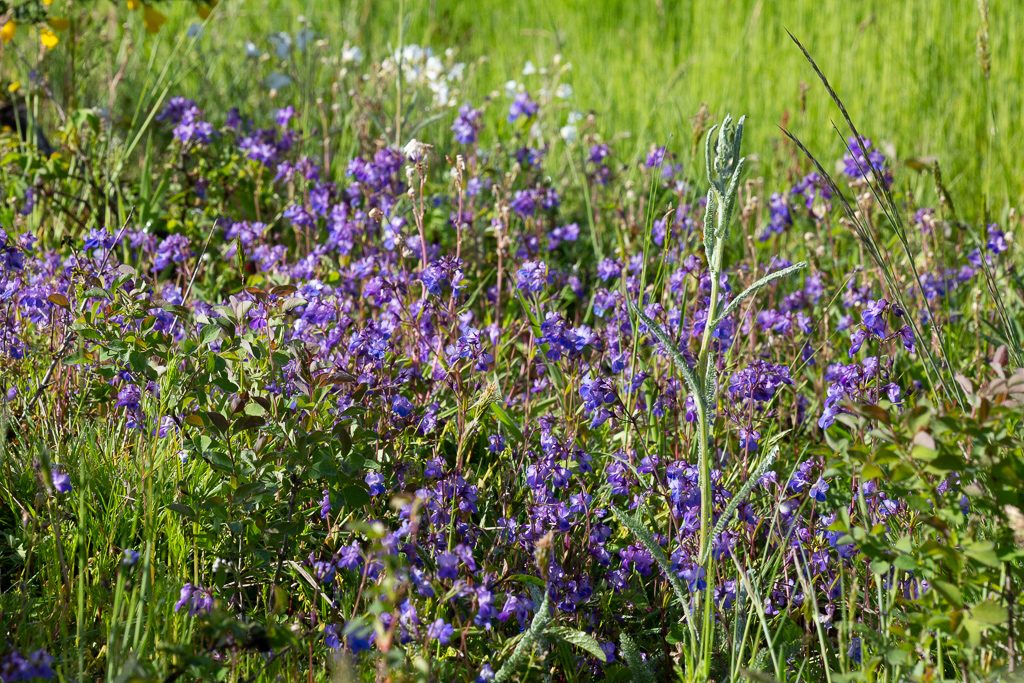 A large patch of Collinsia at Scatter Creek, photo by Dennis Plank 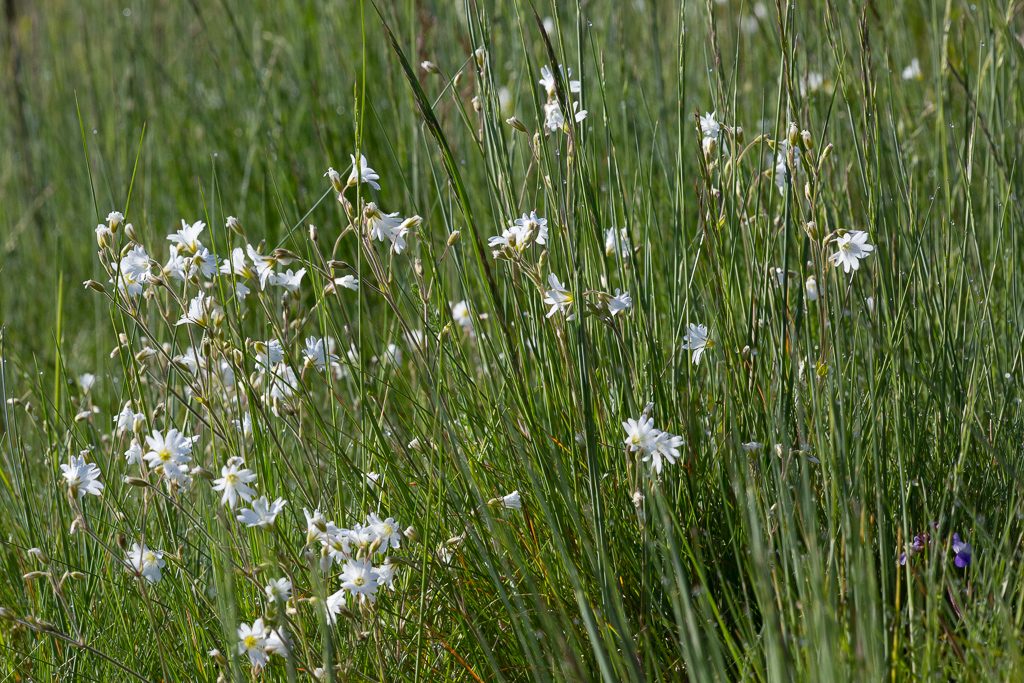 And a very nice patch of Field Chickweed right nest to the Collinsia, photo by Dennis Plank

When I reached the power lines, I crossed over to the south side of the central strip of oak woodland and started back toward the parking lot. Toward the beginning of the crossover, there was a large dense patch of violets on the left which I failed to photograph. Shortly after turning back, I encountered an area of Balsamroot. The plants looked healthy and there were a lot of young starts in the area, but this bloom looked a bit decrepit. 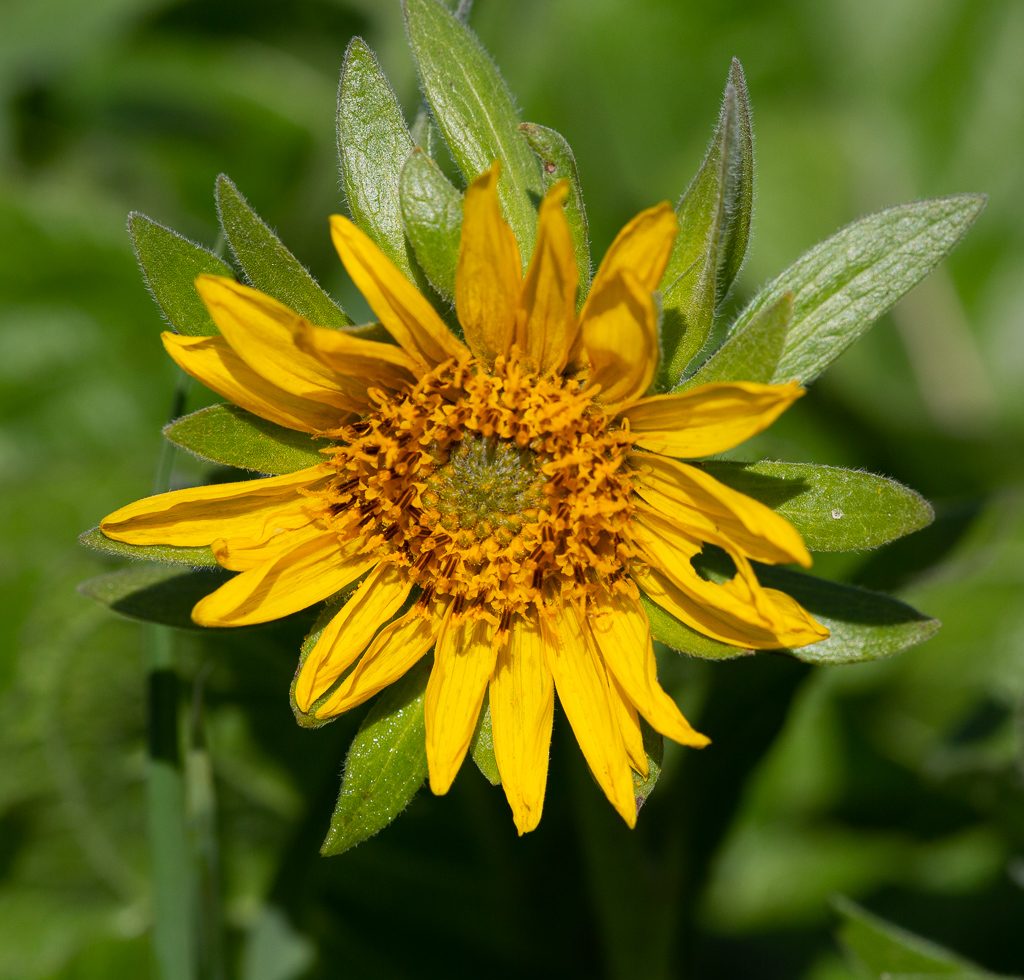 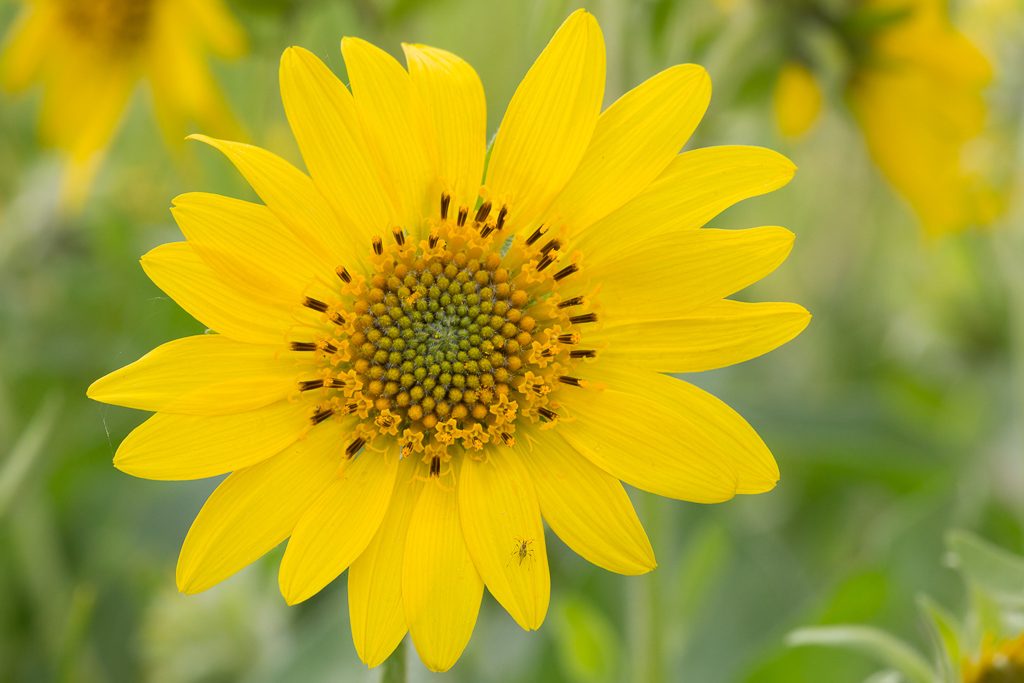 And a pristine Balsamroot from four years ago, photo by Dennis Plank

Right next to the Balsamroot was a very nice group of Harsh Paintbrush backlit by the morning sun.  This was a photo worth spending a little extra time on. 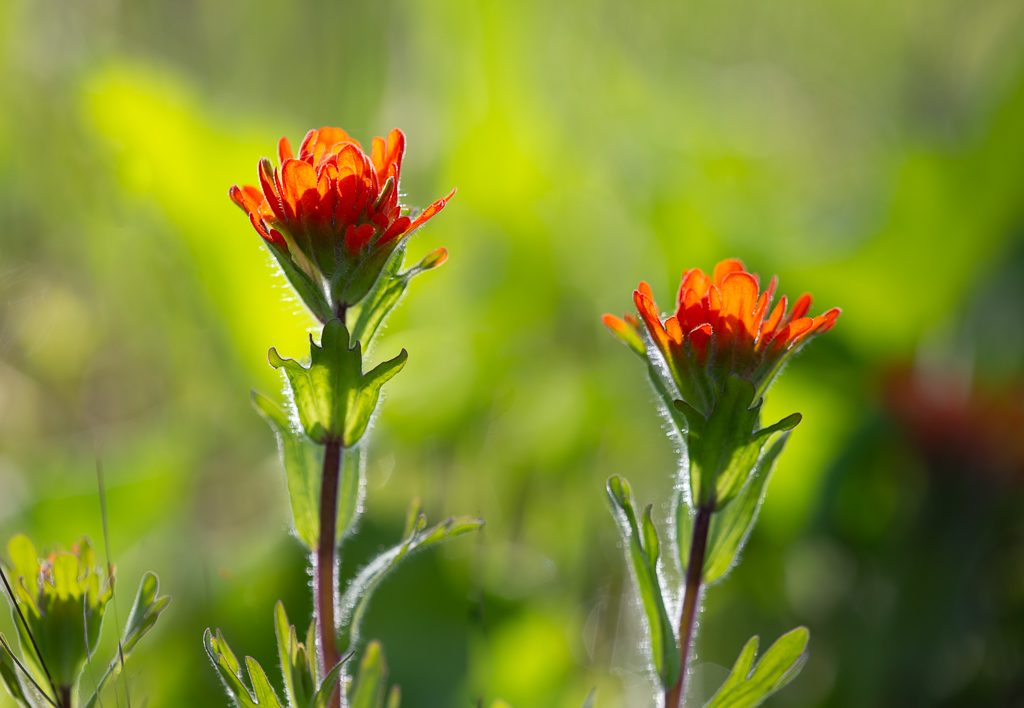 A bit further on, there’s a place with a few oaks on the right side of the trail and under them was a very nice patch of Chocolate Lilies in full bloom. I was lucky to get any photographs as the wind was picking up ant they were at the end of a tall stem waving in the breeze. Focus was pretty much a guess, but a few shots came out nicely. I liked the bug riding the terminal leaf on this one. 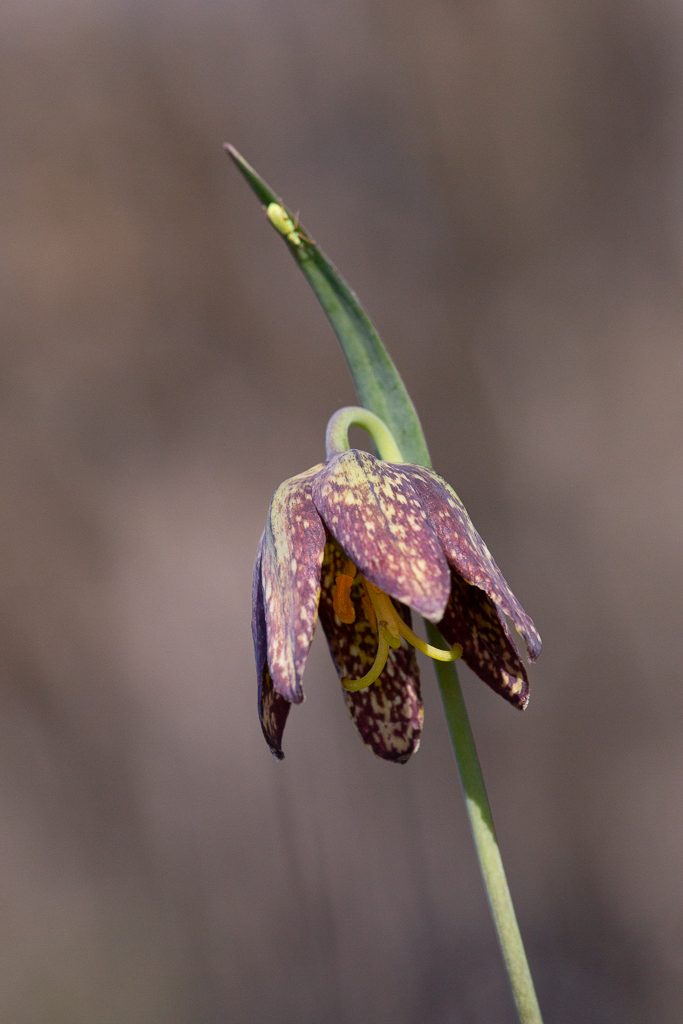 Finally, less than 100 yards from the parking lot, I encountered a small patch of Yarrow that was already in bloom. It always amazes me how radically different the microclimates are between our location at the foot of the Black Hills and the area along I-5, about 2 ½ miles away. 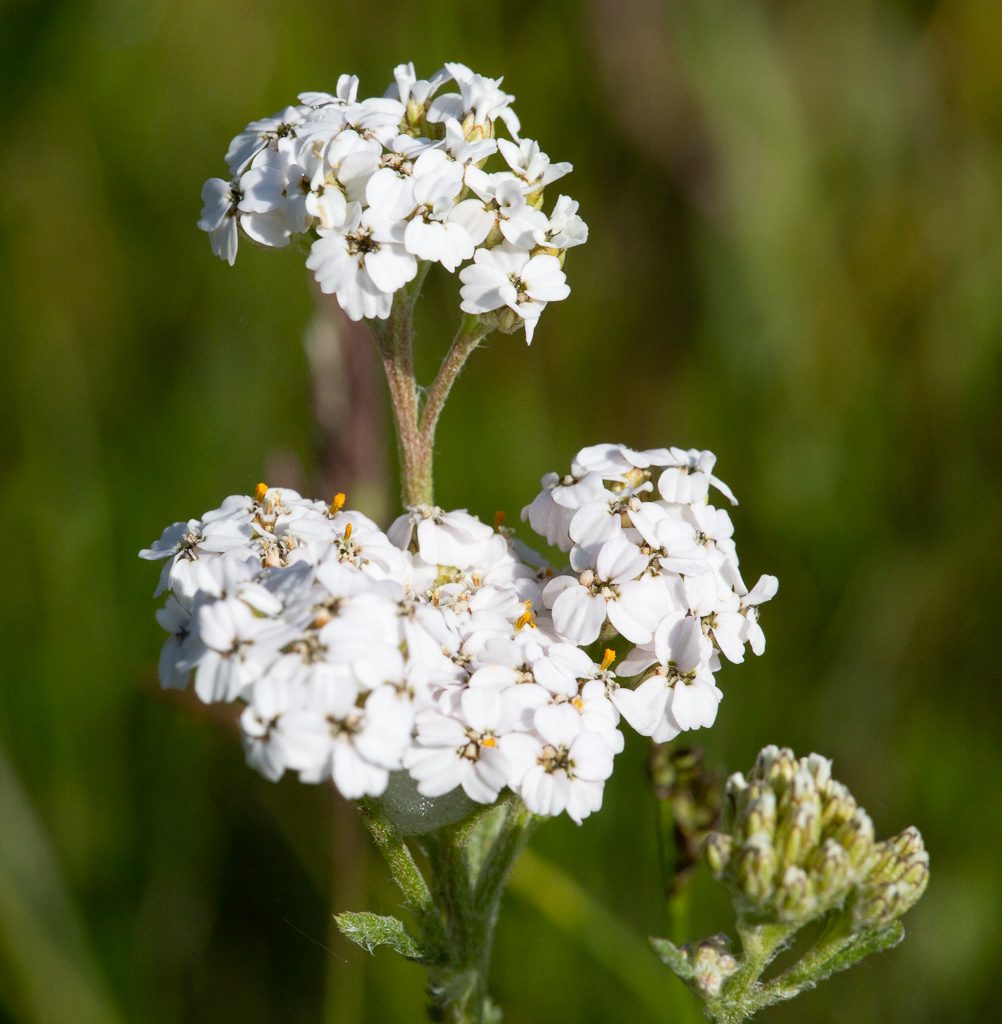 Yarrow in bloom while ours is still tightly closed buds, photo by Dennis Plank