My husband, Jim, and I and our 4 kids lived in Butler, PA, north of Pittsburgh. We had joined a friendly group of natural food devotees and we learned about the coming Earth Day Celebration. One friend, a teacher, organized a series of talks featuring a lot of environmental issues, leading up to Earth Day. The last class was on Earth Day. Out of this group came a bunch of us who then organized a group we called B.E.A.T. (Butler Environmental Action Team) and worked very hard to set up a recycling center in the city of Butler. We had to find a place (donated space by a local industry), then places to deliver all the recyclables and how to pay our expenses. We got barrels donated by the local steel mill (who didn’t want us to bother them later) plus other donations. We were open every other Saturday. People couldn’t get over how we thanked them for their “rubbish.” I was the Treasurer and all of us were volunteers. We kept it going successfully for about 3 years and then had to give up because the space became unavailable and we were all exhausted and needed to get on with our lives. And I have been recycling ever since, for 50 years. I celebrate Earth Day every year in some way or another. Happy 50th Earth Day, everybody! Do something wild and wonderful for the Earth.

Well, mostly I raised 4 kids and was a Girl Scout leader for many years in PA. Then I went to grad school in biology and while there helped my Ornithology prof found a new Audubon chapter around 1980. Others helped, too, including my husband Jim. That chapter is still going and has gotten much bigger and manages their own habitat lands now. Moved to WA in 1984 and in 1988 started work to help protect public resources (Wildlife, fish and water quality) for the next 13 years under the Timber, Fish and Wildlife Agreement. In 1994, a group of friends and I started the Chehalis River Basin Land Trust, headquartered in Centralia and operating in the entire Chehalis Basin. I was President of it for about 17 years. Presently it manages about 2,000 acres it owns and about 2,000 acres of Conservation Easements. I’ve always been active in Audubon so helped with the Grays Harbor chapter and now am President. Couldn’t do it without the excellent board we have.

Earth Day is the time when I gain hope that things are improving and at the same time wonder if humans will ever stop being cruel and exploitative to the environment.

Fifty Years Later and Still Working for the Earth 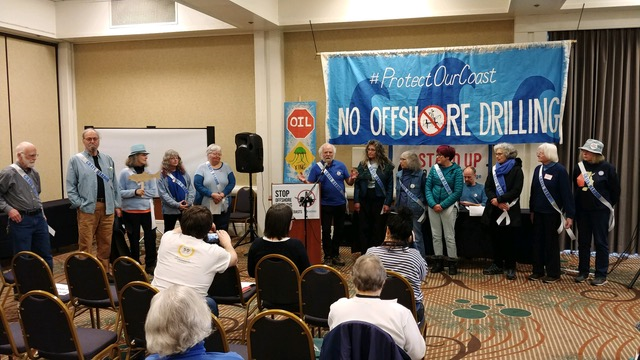 Janet is second from the right.

Also, if you have access, check out the Opinion Piece in the April 12th Edition of the Seattle times by Earth Day’s first national coordinator, Denis Hayes, now President of the Bullitt Foundation.