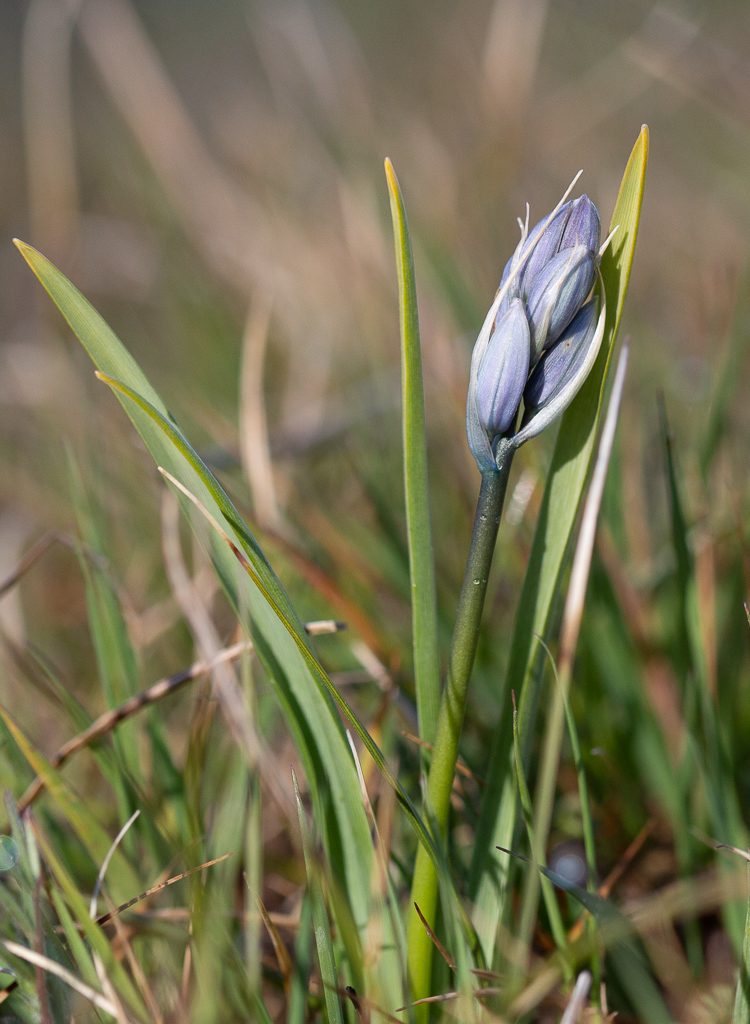 With all the public prairies closed, finding material for this blog has been confined to our five acres and the immediate neighborhood. While Glacial Heritage is within easy walking distance, rumor has it that the County is patrolling it to keep visitors out for whatever reason. Not wanting to encourage others to violate the counties wishes, I’ve chosen not to try going there, tempting as it is. However, to broaden the scope of this to species we don’t have on our five acres, I contacted Sanders Freed of the Center for Natural Lands Management about visiting their Tenalquot preserve, which is further along in restoration than most of the other preserves and is sufficiently secluded not to call attention to a visitor.

I chose Friday, April 10th because cloudy skies were predicted, which are ideal for flower photography. Well, ten miles can make a significant difference in the weather around here. I was in clouds most of the way, but they had broken by the time I got to Tenalquot. However, the sunlight was still sufficiently diffuse to make photography feasible.

The first discovery of the morning was a Camas with well formed bloom buds. However, don’t get too excited, I only found three of them on the preserve in that condition.

While Tenalquot is in very good condition in terms of controlling Scotch Broom, the general prairie flora is still in serious need of augmentation. They got what looked like a vary nice controlled burn in last year and Sanders informed me that it was seeded afterwards, so that should produce a major improvement in the habitat.

I wound my way through the burn area without finding much of anything in bloom yet and went to one of the areas we’ve been augmenting for Taylor’s Checkerspot butterfly release (the other major area had a bunch of flags from a release done earlier this year, so I stayed well away from it, not wanting to step on any larvae. 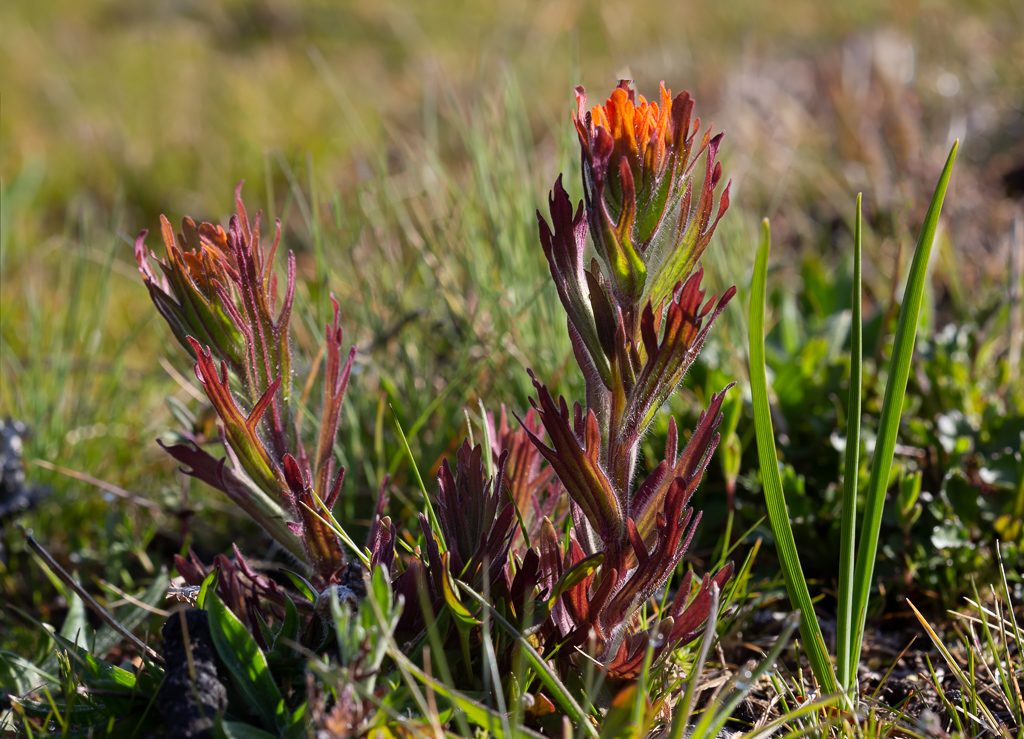 By coincidence the first flowering plant I spotted was a Harsh Paintbrush (Castilleja hispida) which is planted as a host for the Checkerspot larvae along with other larval food plants and nectar plants for the adults. The more famous but rarer Golden Paintbrush (Castilleja levisecta) isn’t planted at Tenalquot because it is endangered and the two paintbrushes are known to hybridize, so the reintroduction plan for the Golden calls for keeping some geographical isolation between the two.

Since the two paintbrushes have about the same bloom time, the Golden should also be starting to form blooms about now. Glacial Heritage has a great deal of it, so plan now to get out there next spring for a workday or for Prairie Appreciation Day 2021.

After spending so many hours helping to plant this area, I was treading very carefully to avoid stepping on anything that looked like a forb while still trying to find anything that was flowering. The next plant I encountered was Thrift or Sea-Pink (Armeria maritima). This is one of those flowers that although native to our area (and much of the northern hemisphere, has also been long domesticated and turned into fancy forms. I also remember this as one of the healthier groups of plugs and one of the easiest to extricate from the tubes. 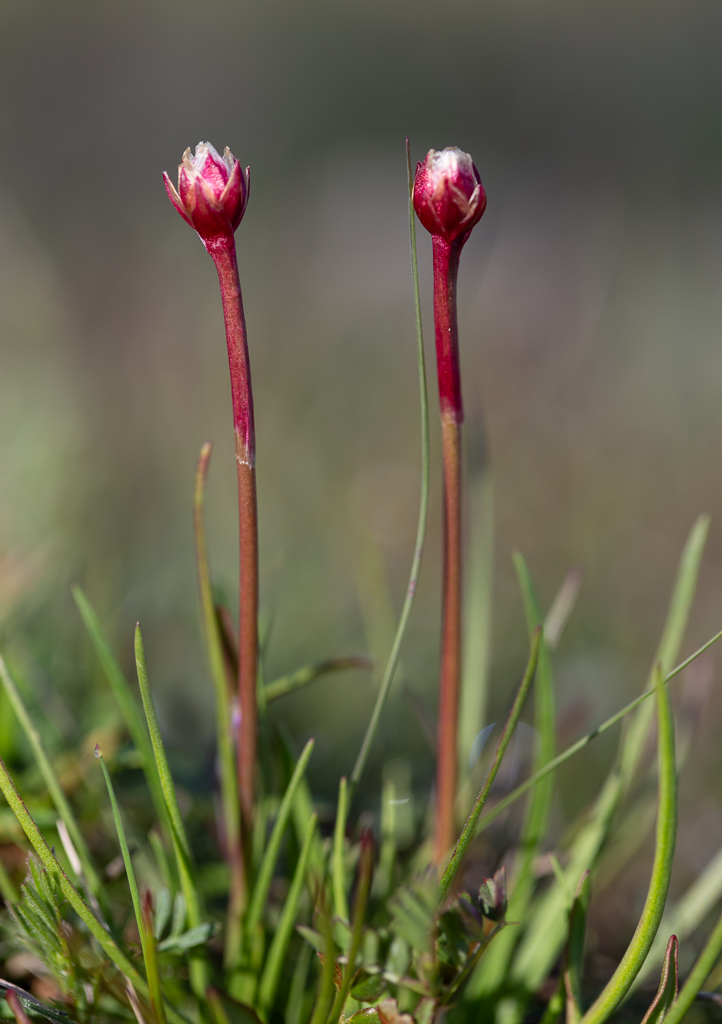 Next encountered was a fine specimen of the Wild Strawberry (Fragaria virginiana). While this grows well and spreads prolifically, good luck trying to actually get a berry off it before the critters do. I think I was successful once along a forest service road in the mountains. I’ve never gotten one off my own property. Rumor has it that they’re pretty good. 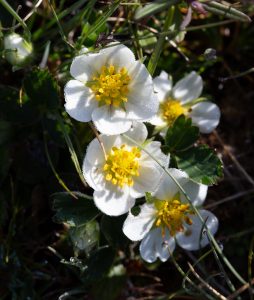 Field Chickweed (Cerastium arvense) was just starting to put out a few blossoms, though the plants were looking quite robust. 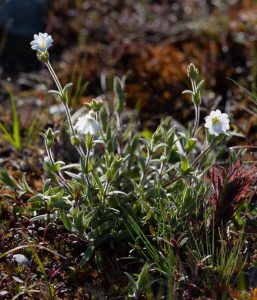 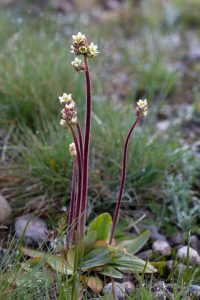 We’ve been planting Whole-leaf Saxifrage also known as Swamp Saxifrage (Micranthes integrifolia) even though something called swamp and known for wettish locations sure doesn’t seem right for our prairies that dry out so thoroughly later in the year. However, it seems to do fine with the wet winters and springs. This is one of the many plants that’s changed genus on me since I got into native plants. It used to be Saxifraga integrifolia, so if you have older sources, you might look under that name. My 2004 edition of “Plants of the Pacific Norhtwest Coast” by Pojar and MacKinnon lists it under Saxifraga, though it’s not pictured and just mentioned under the entry for Western Saxifrage where they refer to it as Grassland Saxifrage. Field Guide to the Plants of the South Sound Prairies has it listed under the current name and that resource is available on-line at https://wikis.evergreen.edu/pugetprairieplants/index.php/Main_Page.

The final prairie species was a Chocolate Lily (Fritillaria lanceolata) which was quite close to blooming. 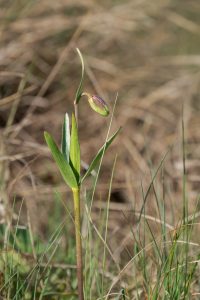 Of course there was also a lot of Spring-gold and Buttercup still in bloom scattered throughout the prairie.

After leaving the future butterfly release area, I wandered around listening to the Purple Martins of which there is quite a colony at this site and walked back across the prairie where several White-crowned Sparrows were singing on territory. Most people are familiar with their song whether they know it or not as these birds like to set up shop in almost any parking lot where there are trees. I tried taking a picture of him singing, but he was too high up and the sun too bright, so here’s one from the archives.

All in all, it was a wonderful outing.

According to the Olympian, the Thurston County Commissioners voted to reopen the county managed trails, so get out, take a walk, and see what you can find. “Spring is busting out all over.” (with apologies to Rodgers and Hammerstein). 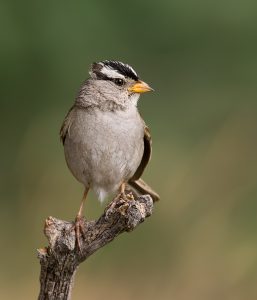